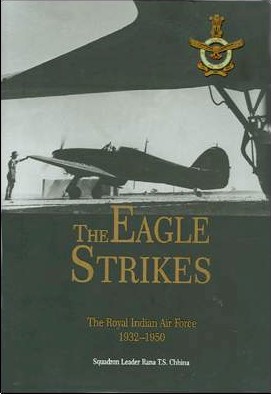 Squadron Ldr R T S Chhina, is a well known armed forces historian known for his path breaking - 'Memorial Book' where he put on paper every Indian AF casualty since the Second World War up to the 1971 conflict. This book has been classified as RESTRICTED by the IAF but those who have managed to read that book will understand that there has been probably no greater work of research and dedication than it (except that required for the six volume 'History of the Indian Armed forces' by the joint Pakistani and Indian Historical cell of 1949). Squadron Ldr Chhina doesn't disappoint the reader in this book either.

Lavishly produced to the best international standards, the book provides 340 pages of sheer wonder and enjoyment to anybody who loves aviation and history particularly, the variety and circumstances of the IAF, the first truly all Indian service.

The book starts with a forward by none more capable and correct for this book - Marshal of the Air Force Arjan Singh, DFC. The book is divided into sixteen chapters and six appendices. The chapters are carefully divided into birth of an Air Force, Baptism of fire on the frontier, 2nd Arakan, Battles of Imphal and Kohima, central Burma battles, Occupation in Japan, raiders in Paradise (a chapter on the J&K conflict), Deccan Chukkers (OP Polo) et al, and a final chapter on the personalities of the period from the oft seen MS Pujji, Arjan Singh, Majithia and the Engineer brothers but also OP mehra, HRD Blunt, HC Dewan, Chopra, Aquino, Chandran, Niranjan Prasad, Subia, Awan, Nur Khan etc including Plt Offr Cuthbert Prune a Rhesus monkey mascot of 8 Squadron.

The appendices consist of honours and awards, which include M-in-Ds, including those awarded to PBORs (another first for an Indian book), a casualty roll for the period, an ops summary including campaigns in support of and airfields operated from, Strength of the IAF at various periods and finally a tribute to the airmen. This is probably the first book that devotes so much real estate to the unsung. Many pictures of airmen with details of names and acts of valour are spread all over the book, which is heart warming.

From the shot of the Hurricane IIC silhouetted against the Dakota wing on the cover to recruiting poster of Plt Offr Harjinder Singh on the back, the book is a riot of rare, hand picked shots. Although several shots are quite well known to visitors of the BR site the rest will have the average enthusiast chomping at the bit.

Rare inflight shots of 1 Squadron Wapitis with long range tanks, a crashed 1 Squadron Wapiti J9738. The famous Kartar Singh Taunque (whose grandson became the first Indian from the American Army to be killed in Iraq) in the back of a 1 Squadron Wapiti. a pic of his M in D (the first IAF personnel ever to be decorated) etc. A detailed account of the Coastal Defence Flights follows with rare pictures of a Wapiti with target tow equipment from the AA Cooperation Flight, Rapides, Harts, Hudsons, Blenheims follow.

Panoramic shots of the camps at Razmak and the Tochi scouts at the Boya fort and off course the Hurricanes being bedded down in the fort at Miranshah are equally rare.

The retreat from Burma is then covered in detail with the exploits of Hemu Choudhary and Jumbo's and Engineer's DFC covered in detail. The expansion and growth chapter covers the SFTS and pictures of Chinese AF cadets flying Curtiss Hawks over the plains of Punjab and the only shot of the first Indian Paratroops boarding a Valentia.

Then pictures of white nosed Spitfire Mk VIIIs at Akyab south including airborne shots over the Arrakkan coast. Some very rare pictures of 8 and 9 Squadron groups on vengeances and Spits, The usual mess hall formal and casual group shots and PSP and bamboo matting aprons with Hurricanes clearing their plugs on beach strips. A fantastic shot of Stuart tanks of Indian 7 Cavalry (4 Corps) meeting up with British XXXIII Corps lead elements at milestone 109 on the Imphal-Kohima road and Ranjan Dutt's personal account of escorting the Sallys of the the surrendering Japanese forces in Burma with great pictures. This is followed by the first person account of Fg Offr KV Nair who tells of his POW days, the 29 day death march to Rangoon and the wretched animal like existence for the next 2 years. Shots of Japanese bullet holes in Fg Offr Cheema's Hurri wing are also rare.

Then follows 4 Squadron Spits at Yelahanka with some rare pictures of Jagdev Chandra, Nur Khan, Devasher, Aziz, and Shipurkar. Rare pictures of the Japanese peering at the Oorial markings on the nose of a Spitfire are a delight as is the picture of Air Marshal Sir Guy Garrod feeding cigarettes to the Squadron mascot 'Oorial Boost" a goat from the frontier.

The 47-48 conflict is lightly covered with no new material, as is Op Polo.. Then follows another unseen pic of the first Vampire ferry pilots with Krishna Menon at the London Military club. The book ends with India becoming a republic in 1950. Overall the telling of the story is refreshing, with a new anecdotal format and lots of new tidbits and facts. Yes it's the same old story, but its never been told like this before. Truly a triumph of the historian's craft.