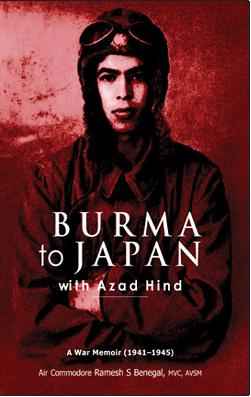 Take a close look at the cover of this fighter pilot's (partial) autobiography - the pilot on the cover is not dressed up in typical Indian Air Force gear. Neither is he wearing any familiar RAF or RIAF gear. What you see is the author, as a young Officer Cadet, in the pilot gear of the Imperial Japanese Army Air Force during the Second World War!

The author of this book, Air Commodore Ramesh Sakharam Benegal was a war hero and a legend in his time. He was the wartime Commanding Officer of No.106 SR Squadron during the 1971 Ops. He personally undertook many hazardous sorties over hostile territory both before and during the war. His effort was recognised with the award of a Maha Vir Chakra, India's second highest gallantry award in the face of the enemy.

It is no secret that a career as a fighter pilot in the IAF is full of adventure, danger and excitement. While most career officers can narrate quite a few tales about episodes in uniform, they would be hard pressed to tell any from the time before they joined up. Air Commodore Benegal falls in that rare category of officers who have lived a full life - even before donning the IAF blues.

Before he joined the Indian Air Force, Air Commodore Benegal was a member of the Indian National Army (INA) - he was one of the original "Tokyo Cadets" - selected for Officer Training in Japan at the height of World War II. As an Officer Cadet, Benegal opted for flying training with the Imperial Japanese Army Air Force Academy , but the end of WW2 cut short those plans and he had to return to India to be interned by the British.

This book, published after his death by Mrs Meera Benegal, his wife,deals with his INA years. It narrates the trials and tribulations that he went through during his early days as an expat Indian born and bought up in Burma. The Japanese invasion of Burma in Second World War put many such expat Indian families in a quandary. Benegal was one of the many who stayed back. Subsequently attracted by the charisma of Netaji Subhash Chandra Bose, a young Benegal joined the Indian National Army. He narrates on how he volunteered for Officer training and thus began his incredible adventurous journey from Burma to Japan - a Journey that would take him through the death train across Siam, a horrific sinking of a ship in which the loss of life would put even the Titanic to shame, and the daily USAF B-29 bombing of the Japanese mainland that ended with the dropping of the Atomic bombs on Hiroshima and Nagasaki.

There are colourful descriptions of the other "Tokyo Cadets" being shared in this account. He was one of the rare few who had met with Netaji Subhash Chandra Bose in person. Benegal's training at the cadet academy in Tokyo, then volunteering for pilot training, and the interactions with the Japanese people etc make interesting reading.

The end of the war finds Benegal being shipped to India to be imprisoned by the British - ironically the first time he actually set foot in India. Released a few weeks later - thanks to the prevailing atmosphere at that time - Benegal decided to join the Indian Air Force . His hopes would be dashed when the IAF rejected his application citing his INA links! Not content with that response, Benegal would try again, this time successfully to get commissioned in the IAF in 1952.

The book stops at the point when he joins the IAF , and one couldnt but regret that it should have gone on to narrate his Indian Air Force career as well. However to compensate for the lack of material on his IAF days, there is a nice account in the Afterword by Air Marshal G C S Rajwar (Retd), who as a young Flt Lt flew along with Benegal during the 1971 Operations. Air Marshal Rajwar pens a very detailed account of the 71 Operations that cover not only Benegal and his missions, but other sorties executed by Benegal's Squadron.

I personally wished that the family re-published excerpts from Air Chief Marshal P C Lal's book - in which Air Commodore Benegal himself had penned the details of some of his missions from the 71 war. While some may have felt that it would have been a duplication of information, it would have made it complete to have everything in one single book.

Other Reviews of this book:

Add your review to this page