Airborne to Chairborne : Memoirs of a War Veteran

Airborne to Chairborne : Memoirs of a War Veteran 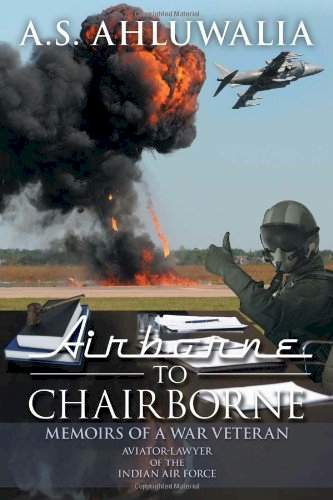 The title of the book is quite a handful - it reads "Airborne to Chairborne : Memoirs of a War Veteran, Aviator-Lawyer of the Indian Air Force". The cover shows a collage of scenes, an American pilot giving a thumbs up, an Av-8B harrier pulling away, a bomb blast in the background. The title coupled with the cover gives a mixed impression. Who wrote this book? What is this about? How is it that the cover has nothing about the Indian Air Force other than the title. Should I try and get my hands on this book at all?

The short answer is - YES - you must. Don't let the cover deceive you. "Airborne to Chairborne" is the autobiography of Group Captain (Retd) Amrik Singh Ahluwalia, who retired after a thirty year career in the IAF as a Navigator and as a member of the Judge Advocate General Branch. This is no small book. It is 668 Pages in total, Illustrated throughout, with good bibliography and index. It when you hold the book in the hands that the heft of it hits you. It is one of the most detailed and well written autobiographies that an Indian Air Force Officer has written till date. A S Ahluwalia narrates all the stories in good detail and it makes many hours of engrossing reading. This is the kind of memoirs that historians like us wish for and got it.

The Author joined the IAF in 1952 and hoped to be a pilot. He was on his way to becoming one; however a change of instructor left him saddled with an unsympathetic flying instructor and his subsequent rostering to the Navigation branch. Without letting the initial setback get to him, Ahluwalia took up Navigation with gusto and was posted to a Transport Squadron in the North East. From there he was handpicked for Navigator training for the English Electric Canberra in England.

Perhaps reflecting the chaotic nature of those days - Ahluwalia, after being trained on the latest and greatest aircraft that a Navigator could wish to fly was then turned around and sent to ice cold Russia for training on the Il-14 aircraft!. Then again - after a short stint, He was sent back to a Canberra Squadron at Agra - The Tuskers and took part in the 1965 operations. This offers an opportunity to provide one of the rare accounts on how a Canberra squadron operated in the war. The author provides real insight about his time with the Tuskers during the war, including the touchy subject of Gallantry awards. Ahluwalia gives credit where it's due and pulls no punches on the fact that many deserving names were left out when the time came for the gallantry awards.

The book carries on with the Author's experiences - Attending staff college, His posting to Advanced HQ, WAC, his role in defending an Officer at a Court Martial - at each step, we get an insight into the various personalities he had served with. Some of the events of that time are overshadowed by a feud the Author had with another senior officer. This ultimately brings us to 1969, when the author applied for and then transferred to the Judge Advocate General Branch (JAG) - it is here the book takes an interesting turn. Call it going from Top Gun to Perry Mason - the stories of squadron operations and flying duties are suddenly replaced with intriguing legal cases and court-martials. Also of interest is the Author's role as the IAF liaison in the making of "Hindustan Ki Kasam" . Talk about adding a dash of bollywood in the mix! The law career continued in later years with the author representing many aggrieved parties in the Air Force's legal system. His transition to the "chairborne" legal profession was conducted slowly but firmly.

The book is quite long - covering 30 years of IAF service, 10 years as a Supreme Court lawyer and in the final pages, covering the Author's move to California. It has something for everyone. And as a detailed account of life in the IAF in the 50s and 60s, is an indispensable record worth documenting. If there is a complaint that a layman reader might make - then it could be about the books length being too long. But from a historian's perspective, there is no such phrase as "too long"!

The book is currently available via Amazon in three formats - Hardbound, Softbound and Kindle e-book