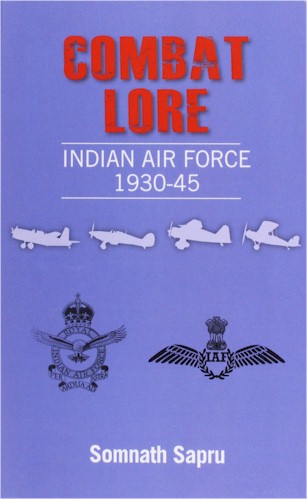 "Combat Lore" by Somnath Sapru was the most anticipated books in recent times that I was trying to get my hands on. I had my eye on it for a while and was finally able to procure a copy during my recent visit to India. And needless to say I dived right into it as soon as I got it into my hands.

I have spent the past fourteen to fifteen years devoted to the Second World War History of the Indian Air Force. In the era when the numbers of the surviving veterans were fast dwindling, I have over the course, interviewed roughly half a dozen or so veterans and recorded their stories. I also wondered why it was that no one has ever done an effort to record veteran stories when their numbers were still strong. And I always lamented that no one ever carried out such an effort. Turns out I was wrong. There was that ONE person who spent years of effort in gathering the first person stories from many of the well known WW2 veterans when they were still alive. That person is ofcourse the Author, Somnath Sapru.

In the early 70s, Somnath Sapru started collecting first person accounts and conducting interviews with surviving WW2 veterans. Over the course of the years he had interviewed almost 40-50 veterans and transcribed their accounts. These accounts spanned Officers and Airmen across a wide spectrum. He had interviewed Cranwell-ites who made up the IAF in the 30s. Then on to the first batches of IAFVR officers as well as several of the senior NCOs and Airmen. These accounts included many of the 'Majumdar's Tigers' who were part of No.1 Squadron during the first tour of Burma Operations. That this effort was undertaken without the help of the Internet simply boggles my mind.

'Combat Lore' is thus an anthology of these first person interviews and accounts. The book is a massive 600 pages in length. Published as a Hardbound book by Knowledge World Publishers, it has a few rare photographs from that era that were interesting, but as mentioned before, the core of the book that is of interest are these first person accounts and pen profiles.

Sapru had titled the book as 'Lore' a short form for 'folk lore' which in itself translates as something passed down by word of mouth. Oral  histories, by themselves tend to be inaccurate and confusing, and requires a lot of additional research to add meat to the words. In that context the title is apt.

While the effort for this book is truly five-star rated, the execution, however falls short. Sapru had tended to reproduce sections from other contemporary litterature including Harjinder Singh's 'Birth of an Air Force', Bouchiers, 'Spitfires Over Japan' and Wilfrid Russells 'Forgotten Skies'. Additionally some squadron histories from the Official WW2 IAF history are also inserted in between. These reproduced texts tend to distract from the core of the book. It might be a service for other readers as some of the above mentioned books are out of print, but for the reviewer who has a well stocked library, these were an unnecessary distraction.

The result of adding these excerpts was that the structure of the book comes out confusing and mixed. I wish that the book was made up only of veteran interviews and first person accounts that the author directly dealt with, and these secondary sources could have been done away with. Re-organisation of the interviews either by the year these veterans were commissioned, or perhaps by the primary unit that they were identified with, would have been ideal. Additionally, accompanying Author researched notes would have been preferred, but not really necessary. I could have lived with just reading the veteran accounts.   Add to this the typos, a few incorrect references (eg calling JN Tandon as TN Tandon in several places), inconsistent style in ranks (PO in some places, and Plt Offrs in others) mars an otherwise excellent book. The lack of index is another flaw to note.

However all this is nitpicking. I am perfectly happy to sift through the 600 pages of text to get my 300 pages of narrative that bring the voices of the long deceased veterans to life. I could go on and on about these accounts, suffice it to say that Somnath Sapru has done yeoman service to the future generations of IAF Historians including this reviewer. In an era when WW2 research can only be made via primary resources like documents, Sapru's book will provide the repository of the veteran accounts that one can rely on. For this the current and future generations of IAF historians will be grateful to the author.  This book is highly recommended - and would have been rated as five stars. However the above said flaws ding the ranking by 1.5 stars.