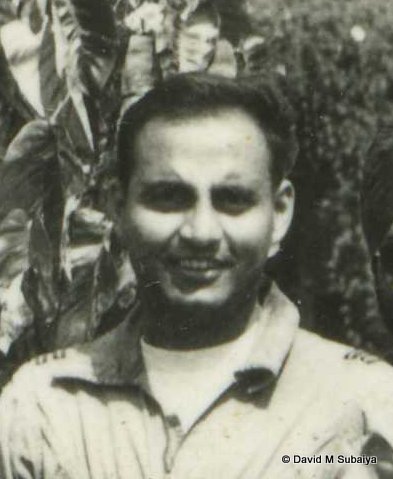 On 8th March 1967, a young Flying Officer, with less than four years of service, found himself in a predicament over the skies of northern India when the aircraft's main gear did not deploy correctly.  Then Fg Offr David "Dadoo" Subaiya was faced with the choice of crash landing or trusting the SNCASO ejection seat of his Mystere IVa fighter bomber. This is his story in Video!

David Malcolm "Dadoo" Subaiya was a Flying Officer flying Mystere IVA fighter bombers with No.32 Squadron - under the command of Wg Cdr Jayawant Singh.  In March 1967, 32 Squadron along with No.1 Squadron was taking part in Exercise "BETWA" - a collaboration with the Indian Army Western Air Command.  On 8th March 1967, Subaiya took off in a Mystere IVa - IA-956 when he encountered undercarraige trouble.

"32 squadron and 1 squadron. Philip rajkumar was also there. we moved to gwalior. We were operating out of tents. all the mess everybody moved into tents. [It was] just like M*A*S*H. before M*A*S*H. this was 1966-67. we were doing army exercises.

It was a four aircraft formation. I remember CD [Chandrasekhar] was no.4 .  After getting airborne, I put the gear up and it didnt sound very well. i put the gear down and put it up again, it went up. We went to the exercise , did well. Coming back when i put the gear down. one gear came and one gear did not come down.

So I said I will come and land like that . and they [Gwalior ATC] said "no no no".. Gwalior is not equipped to handle emergencies so you go to Agra.

Okay, so I went to Agra. So when i contacted them and said "Hey how about foaming the runway?"  they said okay. and I saw that the foaming they started off.  But not even 1/3rd and they stopped.

In the meantime [Wg Cdr] Jayawant Singh [CO] came on the radio . He said 'What are you trying to do?'   I said, land there.. He says - "No such thing. Point the aircraft in a safe direction and eject".

So i saw somewere in front, nice green fields over there, safe direction. i ejected. boom boom boom. everything was perfect.

It was picture perfect. Infact the recommended height at 10000 feet. so i got enough time to .. i was at 7000 feet. The Mystere doesnt climb. it was so underpowered. anyway  6000 feet was enough for me. We never flew the aircraft anything higher than 500 or 1000 feet. Always low level flying. so it was good enough . it was perfect.

People said, "Hey why didnt you jettison the canopy. first? just in case."  It never even occurred to me. Eject means eject - boom!

[We were] flying officers, 67 is 3 years of service with the AF, fully operational. we were the cat whiskers. everything was perfect.

They picked me up and came down. I was perfectly alright. the doctors checked me up and I was alright. got together in AF station. [They said] "lets take a body xray". they took a body x-ray. [Wg Cdr] Pete Wilson came by. That was the first time i met Pete Wilson. Tall guy. Very Impressive. [He] shook my hand. 'how are you feeling'. i said very well. He said okay. 'I will arrange for a packet to fly you back whenever you are ready.  they will drop you off.'

While going back he turned back and said. 'Were you trained in the US?'.

No.32 Squadron Gallery from 1966 http://www.bharat-rakshak.com/IAF/Galleries/History/1965/32Squadron/