Misery at midnight - The ‘Last Supper’

The night of 19 Nov 62 was perhaps the most traumatic of my life.The Chinese had finally arrived at Foothills, just 20 miles from our airbase. Storming the airfield was imminent. Early evening, we were told to go to our pilots rooms (who were not at base), pack one box each  of their personal belongings and bring it to the tarmac. All personnel were instructed likewise. This gave us the impression that perhaps the plan was to fly all of us out - about 200 offrs and airmen from the Wing and 110HU, after setting fire to and destroying equipment. But certainly there were no aircraft for this. I believe there was a a plan also to destroy the airfield runway, but then how would they fly out?

The tension of waiting to be massacred is definitely worse than going boldly into battle and riding your luck. You see movies or read novels of suspense, but this was the real thing. Gloom and despair all round.  We thought of our families- wives,  children - (my son, just eight months old, may not see his father),  went about bolstering our men’s sagging spirits and wondered what was going to happen to us in the next 12 hours. Then a call came at  around 10pm for all Officers at the airfield, to assemble at the Mess.

Our Stn Cdr was at the head of the table and when all were seated, ‘Dinner’ was served

– just bread and onions, because the cooks and waiters had vanished. Well, we thought, this is going to be our ‘Last Supper’, so lets enjoy!. Then he started talking and his words ring in my ears to this day:

“Boys” he said “This is your last night alive. I can’t do anything more for you. The Chinese are only 20 miles away, thousands of them and they can cover this in one night. Expect them early tomorrow morning.We are on our own and there is nobody to defend us. Now go to your rooms, say your prayers and hope for the best. On the way, go to the armoury, collect a revolver and six rounds. When the Chinese come, kill six of them, then put up your hands. Thank you all for your support. So good night”

We all trooped out, quite distraught, no questions asked, knowing he must be at the end of his tether (putting it mildly) and slinked back to our rooms, via the Armoury, with the revolver and ammo. No question of sleep and I just tossed in the bed ,restless.

At about 3am, I heard someone banging at my door.Well, I thought ‘This is it’ I called out “Who is it?”  “Its me, Doctor Verma “( my neighbour  from next door). “They’ve come, they’ve come”  he said, literally trembling. “My God” I said, putting my arm around his shoulder “how do you know?” “ I heard some noise in the bushes”. We locked ourselves inside and peeped through the window. Sure enough there was  a noise in the bushes, about 30 yards away. We listened for some time but I felt there was something strange about the noises- very un-Chinese like!. Then it turned out to be two cats fighting-or whatever(?). We waited to ensure there were no Chinese hiding behind the cats, then went back to bed. Something told me this was a good sign.

Early on 20 Nov morning, all of us were lined up on the tarmac,with our baggage, wondering what happened to the Chinese. No reports had been received about any advance into the Assam region, including Tezpur, which was the reason why there was no setting fire to or destruction of our equipment. Suddenly, at 7.35am, one of my airmen, holding one of those quaint transistors to his ears, gave a big shout “Sir, sir, BBC has announced that the Chinese have declared a unilateral cease-fire”  We could not believe our ears, but confirmation came shortly from official sources. We just slumped to the ground. God’s ways are truly inscrutable!. The other bit of good news we got was that both the pilots, who had been fired upon, were safe.

It was by 24 Nov, that we were assured that there was no more fighting and the Chinese were withdrawing. The tasks of No 110HU were not over, however.

? Supply and rescue missions, had to be carried out further, as many of our troops were scattered over the hills. My own cousin was one of the stragglers.

? Servicing and salvage of the Helicopter at Walong. A  few days after the cease-fire, we got the news that the Helicopter which was shot down, was lying near Walong, and appeared to be badly damaged. After getting clearance that the area was clear of Chinese, we mustered a group of officers and technicians  and set off  in two Helicopters, carrying necessary tools, spares and salvage equipment. Everyone thought that we would just be able to salvage the removable equipment and return. When we saw the Helicopter, BZ587, (I still remember the number), the heavy damage was clearly evident: The oleo legs had been punctured and hydraulic oil had leaked out, an explosive device had been planted in the cockpit and the instruments blasted, Electrical and Signal cables had been cut at the junction, the VHF R/T crystals had been removed, and the right side of the Helicopter was riddled with bullet holes.

Why not patch it up, so that the HC can fly with minimum instruments, the engine being OK? All the concerned tradesmen were there, so under the expert supervision of our E.O. Flt Lt Jain,  the servicing and repair of the Helicopter was carried out, over a period of 2 weeks.The nearest Army unit helped with rations and materials necessary for the job. On the hills around, the dead bodies of our brave jawans, of many regiments and communities, could be seen. Flt Lt Jain was given the privilege of flying the Helicopter back to base, (with some coaching from the trained co-pilot) after it was declared airworthy by the pilots.

The scene at Tezpur airfield, as described to us, was something, out of this world. The Helicopters approached in formation, with BZ587 in the lead, peeled off in turn and then landed to tremendous cheers from all the personnel on the tarmac. I’m sure our present Sarang crowd would have been amazed at the heli-batics! Unfortunately, no cameras, cellphones, Webcams etc were available to record the event. Food for thought – Is an airworthy Mi-4 helicopter, costing 5 lacs in ’62, moré valuable than our modern TEJAS, costing 200 crores, in terms of utilization and lives saved?

The reverse flow to Tezpur started with the Planters, POWs staging through in Daks, and civilians. Normal life soon built up. An American C-130 landed and stayed for an hour. I understand that it was on loan to us since Nov.62 after our Govt had appealed to the U.S authorities for supply of  squadrons of fighter and bomber aircraft.

Return of the Tribal Chief.

The Tribal Chief and Head of the monastery at Towang had taken refuge in  India  mid-October. Early December, we were told to drop him and his retinue back .We were not sure if Towang was clear of the Chinese and even if the troops had withdrawn, some spies in disguise may still be around.One factor in favour was that the tribals in that area were Buddhists and totally averse to the Chinese especially after the mauling of Tibet. After getting final clearance, Debu and I took off for Towang. As we approached, we saw crowds near the helipad, then they started waving.We then decided to risk a landing. The scene after we landed was like Eden Gardens after Tendulkar had scored a century, or India had won a cricket match..They fell at the feet of the Chief and embraced us. I managed to get  hold of a photo of this historic moment, which I have inserted here. 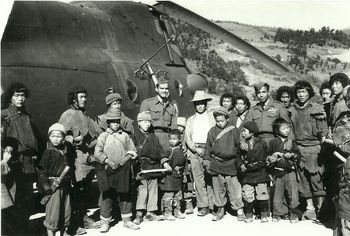 Our doctors , both at the airbase and at the Base Hospital in Tezpur were kept busy with so many casualties flowing in and did a tremendous job.

In view of the facts stated above, my personal experiences and reports from reliable sources, I think it would be greatly appreciated if due recognition is given to No 110 Helicopter Unit, its pilots and Technical Staff, for their professional competence and courage, during this critical phase of history of the Indian Air Force. A special award for Gp Capt Bhawnani for his control and direction, may be considered if not already given. We, in the Air Force, who survived this conflict, owe our lives to them.