How the Indian Air Force came close to destroying eight of its own Jet fighters during the 1962 war. The first ever attempted "Scorched Earth" order in history.  Based on the recollections of Air Marshal Trilochan Singh.

It was the 19th of November 1962, with Indian forces in full retreat in the ongoing war. The Chinese were inside Indian territory and fast approaching Tezpur, with just the Brahmaputra crossing keeping them at bay. The chinese were literally at the foothills on the himalayas - and within 50 km from AFS Tezpur.  If the chinese had managed to push their offensive and reached Tezpur, it would have had a catastrophic impact to morale.  Tezpur town was a flurry of activity with formations moving out, and civilians in a panic.  At the Officers’ Mess of the Air Force Station Tezpur,  Flt Lt Trilochan Singh (5043 F(P)) sipped a cup of tea, little knowing what lay ahead of him.

Contrary to public perception, the Indian Air Force had prepared well to play the offensive role in this war, should the need arise.  No. 29 Squadron, equipped with the Toofanis (Dassault MD.450 Ouragan) had been stationed at the forward base Tezpur, 11 Wing, with Gp Capt ASM Bhawnani as the station commander and Sqn Ldr P K Kuriyan as the Squadron Commander. In the run up to the conflict, 29 Squadron had a full complement of 18 fully loaded Toofanis. Some of these had been flown in as the conflict became imminent. However, there were only 8 fully ops pilots to man these aircrafts. 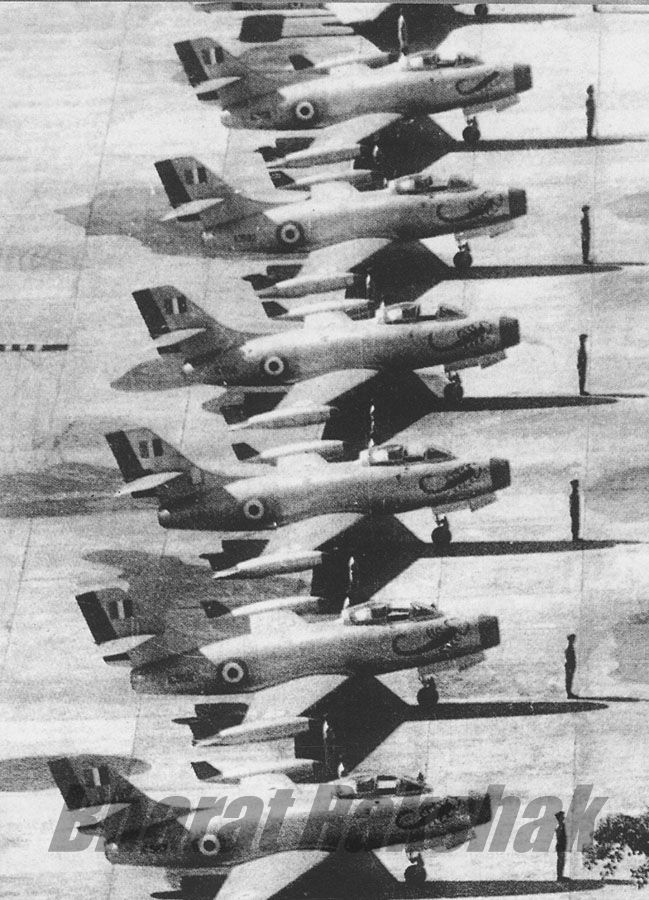 Toofanis of No.29 Squadron "Scorpios" lined up at an airfield in the north east in the 60s.  Pic courtesy: Vayu

The pilots had flown many sorties in the preceding months and knew each valley of the NEFA region well. Extensive reconnaissance of the area was done and no Chinese aircraft threat had ben noticed or observed in the preceding days and weeks. With fewer pilots compared to operational aircraft, the pilots could even be called upon to do quick turnarounds after sorties, jumping out of one aircraft and into the other.

But the orders to use fighters for offensive or defensive roles never came about and the squadron remained on readiness but was never used. The helicopter squadrons on the base on the other hand were extensively used for casualty evacuation and remained heavily utilized.

The "war" had been going on for nearly a month. The Chinese forces had come down from the north, and slowly one after the other, Indian army positions fell . After the forward positions of Thag La and Tawang fell, there was a lull in the fighting before the chinese made a second push. By this time Se La and Bomdi La have fallen, and the chinese have reached the foothills - with less than 50km to cover to reach Tezpur