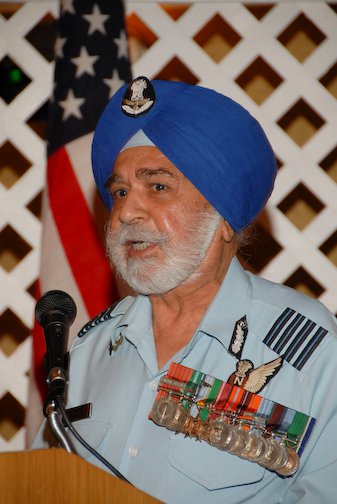 On September 13th, 50 years back the greatest bomber operation against Pakistan was launched by the Indian Air Force. It had all the drama and melodrama, climax and anti-climax, it was a yes, yes, no, no and then YES! It was the operation with the greatest precision on the part of the Indian Air Force, a top-secret mission, known to very few on the top--the AOC-in-C of the Western Air Command, the then CAS (now Marshal of the Indian Air Force) and a few staff officers working on the planning and execution of the mission. These were the 4th and 5th Operational Missions for Gp Capt Amrik Singh Ahluwalia, who narrated the story in Chapter 16 of his book Airborne to Chairborne. The article shares both his thoughts and the actual planning and execution of the mission and the top secrecy from India and a great surprise attack on Pakistan--never, ever, expected by them even in their dreams.

In all people there are two sets of feelings:
One is fear, the other is love.
If there is fear, then we shrink as a person.
But love, wow!
That can move mountains!

2200 hours, September 13 (was it the unfortunate and unlucky date for some?), 1965. Pitch dark and dismal night, with not a speck of light for miles. The moon was to come awake about two hours later. The "TOP SECRET" mission orders were in my brief case; the flight plan had been prepared for the sortie. Sitting in the cozy but cramped cockpit of the Canberra bomber aircraft, with a small red shaded lamp throwing its circle of light on the map, I could only think of a long, momentous night full of melodrama, apprehension, and fear. I had something to think of—the duty ahead; others did not even know where they were headed to............. yet.

My mind catapulted to and recapitulated the day's events. One pilot and I, the bombardier-cum-navigator, had been called to the Operational Headquarters (Op HQ) in Delhi, for planning and leading an important assignment that night. Afternoon……we were there and ushered into the Op planning hall; its walls covered with maps of different scales; colored pins were stuck all over, and ribbons crisscrossed. The huge, transparent, glass partition showed the fighter missions already in combat, or proceeding to, or returning from ground attack missions. After a while, all concerned had assembled—the Chief of the Air Staff (CAS) [the first indication that the mission was positively important], the Air Officer Commanding-in-Chief (AOC-in-C) of the Op Command responsible for that sector of operations, the Command Intelligence Officer (CIO), the Wing Commander in charge of Bomber Operations (Bops), and the two of us.

“Hey! Ahlu. Do you see the runway?” The pilot on the intercom snapped me away from my thoughts. I strained my eyes in the blackness. Did we see the silhouette of a strip below?

“Turn around,” I called back.

Yes, it was “Charlie” airfield, shrouded in a dark mantle of a strictly enforced and extremely effective blackout. A low swoop over the air traffic control tower, three quick flashes of the wing-tip red and green lights, a waggle of the wings—the prearranged signal to total radio-telephony (RT) silence. Two specks of gooseneck flares killed the darkness around them, indicating the beginning and width of the runway. The authorities were expecting us as planned.

Stealthily, we came down in a shallow glide, crossing the threshold indicated by the two flickering flames, ease back gently on the joy-stick, cut throttle, softly touch mother-earth once again, as in thousands of landings before. We taxied behind the “Follow Me” jeep to the assembly area, switched off the two screaming Canberra jet engines and came out into the fresh, cool, clean, and pleasant air of the Punjab September night.

At one minute intervals followed eight more Canberras to embrace this land of the five rivers. Where is the standby tenth? Why was he still circling overhead? Come on .... land. After three unsuccessful endeavors the “Tenth” critically overshot the goose-neck flare markers, touched the runway nearly half-way down at a high speed; the end of the air strip was now rushing towards him; impossible to stop without overrunning the white concrete strip and also the over-run area at the far end.

“Ohh, no! What's he up to?”  I shouted to myself. The heavily laden aircraft, with eight 1000-pound bombs in her underbelly, was swinging to the right. The fire and crash crews had swung into action, rushing in the gloom towards the now inert aircraft, facing the opposite direction, blocking 200 yards of vital runway length with its right wing protruding over and blocking part of the width of the runway, and the left undercarriage collapsed, making that much length unusable. Dame fortune was still on our side. The “Tenth” did not catch fire; its bomb load intact; otherwise, not only the mission would have been in danger of being scuttled but the numerous aircraft on the airfield may have been blown up—imagine the nine of us, waiting on the tarmac, four having two four-thousand-pounders each and the other four with eight one-thousand pounders, blowing up like a chain reaction of fireworks on “Diwali”—the Indian festival of lights!!

Excitement of the crash and fear of the explosions having evaporated, the nine pairs of air-crews huddled together near our aircraft for the preliminary briefing—the “Tenth” crew, having been sent to the medics for a check up.

“I don't think you boys can take-off on your mission tonight,” that was the Base Commander (BC) giving his conclusion of the crash site. Sure, it was a decision to be taken before the final word….. ‘go’ or ‘abort’.

We asked all eight sets of air-crews to go to the nearby briefing room, secure in all respects and with lights on inside! The lead crew accompanied the BC to the accident site. After visual inspection and few rough measurements, quick calculations were made on the computer. The expected surface temperature and humidity, and the wind direction and speed, at the time of take-off, the usable length of the runway after lining up alongside the right wing-tip of the “Tenth”, the total all-up weight that the aircraft would be carrying, were all taken into account. It was calculated that we should be able to achieve the “unstick” speed and get airborne, but landing back, in case of an emergency after take-off, was out of the question. Care will have to be taken to “sit” on the brakes, open full power, and then let go…….for the takeoff.