“Ahlu, we are approaching the Indus River bend,” came the soft and mellow voice of the pilot over the intercom. “I can see the reflection of the moonlight in the water,” he continued. He had been flying the courses, speeds and height and turning according to the times, noted on his knee pad during briefing, and just mumbling those figures to me to ensure double check. I was sure that he was also, while flying, deep in his other thoughts. I went into the glass covered nose, where I was going to be from now on until the bombing run was over. Craning my neck, I could see the clear reflection in the water and, as per our briefing, the pilot automatically started following the river. I rechecked the bombsight and its settings for my target.

“Tango-India to Victor Force….TIs directly overshot 500 yards from center, repeat, 5-0-0 yards overshoot. Out.” That was good considering that the TIs job is the most difficult because he has nothing to go by, and in the light of the flares, which he drops himself, he has to aim for the center point, before the flares go out, and drop the TI bombs.

“That's the Kohat-Peshawar Road which we just crossed. Just did not see it coming up,” I told the pilot, who had also simultaneously observed what had happened, because of the interruption from Tango-India, and went into a tight turn to the right to follow that road northwards to our target and increasing to max speed simultaneously. I quickly adjusted the bombsight to offset for the error of the TIs.

The crisp instructions from me, who was timing now, and the steep pull up to 4,000' pushed me down in the prone seat with the force of gravity. Before we leveled out, I could see the TI bombs and started “homing” on to them through my bombsight. As I commenced my bombing run commentary, my pilot had to remain quiet and only keep doing what was being instructed.... “4000 feet….Straight and level….left-left...left-left….steady, steady, steady.... right....right...steady... bomb doors open.” [Between the crew, repeated practice, brings them to a level when the pitch, the quickness, the speed, and the loudness of the voice giving the directions, indicates the urgency and the requirement desired.]

I could feel the bomb doors opening from the shudder and judder due to the added amount of 'drag', and knowing that the pilot has the toughest time in maintaining his speed and direction at this stage, but he must, because it is the most crucial phase of the whole operation.

I was now holding my breath as the TI bombs were coming into the cross (+) of the bomb sight and my ‘steady’ was becoming quicker like my heart beats. As the cross and the TIs came together, I pressed the bomb release button and shouted, "Bombs gone.....bomb doors closed....climb to flight level 400 [40,000’], course 075."

I was looking out to see the exploding bombs, which, as per the principle of bombing, would explode when the bombing aircraft is right over the target. On seeing them explode where I had expected them to, I was happy that the attack had really gone home. As I was watching and giving instructions, the anti-aircraft from the ground opened up sending 'tracers' way past above us. We realized that the intelligence information was faulty and these guns could reach up to 7,000'.

It had taken more than four minutes for the anti-aircraft guns to get going in spite of the fact that Tango India had spent about that much time circling over target, dropping bright flares and then doing the run for the TI bombs, and then came us. It gave us great satisfaction that the surprise that we had planned for and were anticipating had been achieved.

Victor Force could now 'home' on to the anti-aircraft tracers to reach the target!! After about ten minutes, when we were nearing “Sierra,” the pilot again broke RT silence: “Victor One to Victor Force...Check. Over.”

“Victor 2, OK”. This was followed by all the others.

What a relief. All safe and well on their way back home! From “Sierra” we headed towards “Charlie”.

As we crossed the foothills and were entering the plains there was a frantic RT call: "Victor Leader this is Victor Seven...I am apparently being pursued by a Starfighter near Banihal...Appears to have fired a missile...taking evasive action...descending. Over."

"Victor Seven this is Victor One...Roger...Try to keep down into the hills...and watch your fuel. He should not be able to stay long so far from home. Over!"

"Roger...Victor Seven”. After some tense seconds, came again: “Victor Seven to Victor Leader....I think he is gone. Did not have to go down much! Climbing back to height! Over"!

It appears that a lone Starfighter, taking a chance so far from home, was able to sight one of us, made a pass, but due to the mountainous terrain, could not succeed to lock on. Luck favors the brave.

Peacefully heading for base after a successful operation is a feeling which cannot be expressed in words. Your mind is overloaded with thoughts—thoughts of your dear ones back home; thoughts that you have not had rest for so long; thoughts of what all could have happened to you; thoughts of what must be happening on the ground to the people on whom you unloaded your bombs; thoughts of how much damage would have been caused; how many would have been killed; how many wounded; what chaos would have followed such a raid; thoughts why such wars; why cannot the whole world live in peace and forsake weapons; thoughts what would happen to our dear ones if similar raid was to take place over us; and so on and so forth the mind went. Then again the mind focused on the mornings happening to tie up with what actually happened over the target. 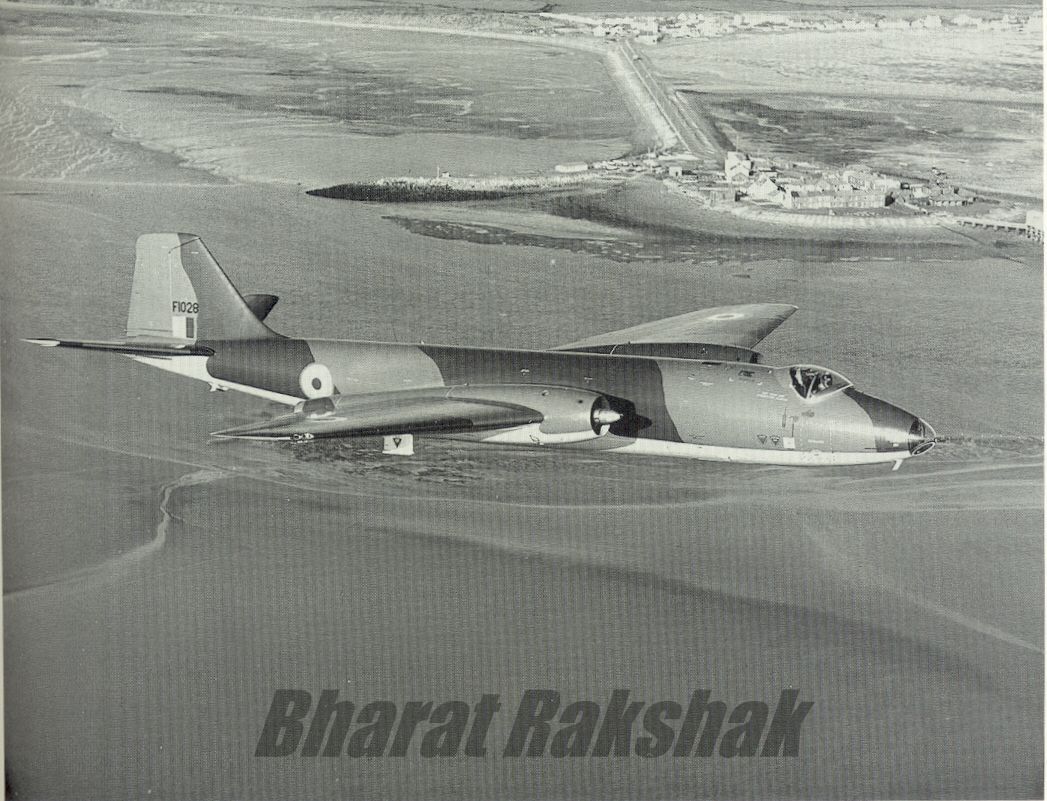 Having succeeded in 'selling' our plan, followed the arguments on the number of aircraft, the bomb loads, the airfields to standby for any emergencies, and many other aspects of an important mission, with emphasis on "Top Secret" being repeated by everyone around. To the four suggested in the first plan, we suggested sixteen, which was shot down by the AOC-in-C outright, because it meant putting the whole squadron into the air against one target. We agreed, and reduced to twelve. Even that was not acceptable. They came to eight. It was like bargaining; but what for? None of us probably knew.

"Well, Gentlemen, it has been a good effort, well-planned, well projected, and we are confident that success should be on our side. I wish to re-emphasize that with all the planning we can go haywire, and it can be a catastrophe, if secrecy is in any way compromised. No one, outside this room is aware of the target. Let it be so until you two," pointing at me and the pilot, "are ready to actually launch from “Charlie”. Strict RT silence will be maintained until over target—come what may. Bops will inform and tie up with AOC “Charlie” for keeping the airfield on standby without lights from 2000 to 0400 hours tonight and keep a listening watch in the ATC at all times. Other than being informed of the landing time of the Canberras at “Charlie” and about the radio silence, no other information need be given. He should have all his refueling bowsers filled up and ready on the tarmac. Bops will also inform “Alpha” to keep a dusk to dawn watch for any of our aircraft in emergency. “Sierra” will not be available. “Able” should standby for the Canberras return in case need be. Good luck, may God Bless you all and Happy landings. Jai Hind!" That was the AOC-in-C's concluding talk.

I was wondering in admiration, that we worry so much planning one operation; what about him who has to see all the operations through day and night throughout the war, of which we did not know where was the end yet, and accept both success and defeat as it comes, with bouquets and brickbats from the top—both service and civil.

The end of the thoughts of the morning briefing brought me out of my reverie as the pilot asked me how far we were from “Charlie”. Knowing that Pakistan radar must have been tracking us on our return to find out the base from which we had launched the attack on Peshawar, the possibility of a counter attack by PAF ground attack fighters on “Charlie” at “first light” could not be ruled out, so we had decided to immediately refuel and take off for home base as soon as possible.

Two hours and twenty five minutes after the launch from “Charlie” we landed back at that base—0245 hours September 14th, 1965. A quick refueling stop, a most refreshing mug of over-sweetened tea at the tarmac, kind courtesy the BC, and at 0330 hours we were off to our home base where we landed at 0430 hours, when most people, our own families, were snoring away, oblivious of the fact that there must be thousands of their kind already grieving in Peshawar.

It was 32 hours since I came home—the family was unaware where I was, because in those 32 hours I had been to Kanpur, Delhi, Agra, “Charlie”, Peshawar and back to “Charlie” and home. After a quick shower, while I was still moving, I realized that the wakefulness, the fatigue, and above all, the fear of the unknown—all take their toll in some form or the other…..Before I could eat even a few bites of my breakfast, I hit the pillow and was snoring.

Success also has its toll—the second Peshawar raid took place on September 16, 1965, a day after the first, and off I was again to Peshawar, but this time as Tango-India, with the CO of No. 5 Squadron, Wing Commander P.P. Singh. These were the only two raids against Peshawar, and I had the privilege of being on both—once leading the bomber force, and the second time to mark the target for the bomber force to come.

It was said that a surprise raid at low level even by Canberras to Peshawar was impossible but then how can one forget the words by someone, I do not recollect, saying: “Only he who can see the invisible can do the impossible.”

Excerpted from Airborne to Chairborne : Memoirs of a War Veteran - Aviator - Lawyer of the Indian Air Force (XLibris 2012)

Gp Capt Ahluwalia was mentioned in dispatches for his participation in the war. He is currently settled in California, USA.