Wing Commander N M Dhavle was part of a Cyclone Relief Dettachment to Sri Lanka in November 1978. He writes in brief about his observations from that time.

I had the opportunity to fly in Sri Lanka in Nov-Dec 1978 for about 17 days. This was as a part of a dett of 2 Alouettes from the HTS, Hakimpet. We conducted Cyclone Relief Ops mainly in central Sri Lanka and around Baticoloa. Aircraft were based at Katunayake, we stayed in Negombo and the deployment lasted from 25 Nov to 11 Dec 78. The Dett was headed by our CO- (then) Sqn Ldr Kalyanraman.

After being transported in an AN-12 to Katunayake Int. Airport (Colombo), the Alouettes were reassembled and airtested the next day. Subsequently, in 10 flying days I clocked 57:35 hours in 81 sorties. The area affected by the cyclone where we conducted food parcel drops stretched roughly from Kurunegala to Dambulla, Minneriya, Polonnaruwa, then the coastal area around Batticoloa, down to Amparai. If weather (or lack of task) permitted we would transit back in the evening from Batticoloa direct to Katunayake. This took us close to Kandy in the central highlands and was a very picturesque route.

We were cautioned not to fly close to Anuradhapura or Trincomalee (China Bay) since there was a danger of being fired on by small arms. LTTE was not yet 'born' then, but some Tamil Lankan organisations were already at strife with the state. Thier unhappiness appeared justified. I recall meeting Tamil officers in the Sri Lankan Air Force, 2 of whom had been demoted for failing to pass the min standard exam in Sinhala language. One of them was flying Mig-19s (!) and demoted to Flg Offr! The seeds of the strife that erupted later were already sown!

The reason I have written about our deployment is that during our intensive flying we saw most of the areas N of Colombo upto Anuradhapura from coast to coast. (Alouette III could easily cover all that distance). Our IPKF was later deployed there. The terrain is covered with very thick jungles, was extensively dotted with swamps and the central highlands reached lofty elevations, while yet retaining the thick green canopy. The weather was typically equatorial- very rainy. Almost every day there were thunderstorms usually starting mid-morning, but often early morning as well as in the evening. The overall terrain was often so swampy that an emergency autorotation was sure to lead to total loss of aircraft and crew- probably never to be found again! The visual ref navigation- with maps supplied by the SLAF, was very very difficult, and made more so by the frequent heavy rains.

With this experience in '78, I was both surprised as well as very worried by the news that Indian govt had decided to deploy our forces to the Sri Lankan north. (If we were asked to venture an opinion on the proposed deployment on ground, our answer would surely have been in the negative, based on our experience). Even our own million maps of Sri Lanka from HTS were found to be inadequate for the nav task. We had to use the maps that the SLAF provided us! .For our IPKF troops the very difficult terrain must have comprised a separate 'enemy force' by itself! 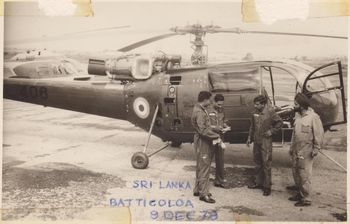 Lastly, I have enclosed a photograph of a part of out Dett at Batticoloa. It shows Air Cmde Naidu at extreme L. He accompanied an Avro HS-748 that arrived from Yelahanka. The Avro flew a few positioning sorties for the relief material. Air Cmde Naidu was also the Senior Liasion Offr for the IAF dett to the SLAF.

On 9 Dec 78 Pres. Jeyawardena was to visit Batticoloa later in the day, since we had completed our ops. Air Cmde Naidu thus decided to accompany us that day to Batticoloa. Prior to the photo op we had negotiated a most intense thunder storm at deck level (as only helicopters can do) during the flight. The storm stretched from just outside Katunayake all the way almost to Batticoloa! (In the photo Air Cmde Naidu is only posing with his finger on my map- he did not really know or care what point he was jabbing at- and he said as much afterwards!)

Next morning we were airlifted back to Hakimpet by another AN-12, following our successful completion of the task.