It was a cold December morning in Agra and “Jock” still a part of “Tuskers” was riding his bike to the Base Operations Room at a slow pace due to the fog, cursing his Flight Commander for timing of the pre-flight briefing at 5;30 am when he knew what the weather would be and not even birds could fly. The optimist that he was, he expected only mist. With the grim picture that emerged through the briefing Jock was sure that he may fly only after 10 am.

He was to fly to Poona as a part of his flying training syllabus in which he is supposed to land at an airfield away from base, get the aircraft “turned around” which included refueling and refurbishing the aircraft with all other fluids, technical checks of the aircraft etc, before it is cleared for takeoff again and return to base. The phrase “Turn Around” had its origin to the fact that when fighter aircraft return to the dispersal (apron) for parking, they park with the nose facing away from any populated area so that if the guns or rockets go off accidentally then no one is hurt. After the ground crew makes the aircraft safe, refuel and rearm it for the next mission, it is turned around by them so that the pilots can taxi out the normal way.

AOC had to give a presentation to someone in “Hawa Mahal” (Air HQ) on Maritime Air Operations and only the “Dragons” at Poona had the “Maal”. Tuskers were specialists on Land and never at Sea. In those days there was the Surdnet, Thanthyanet, Thambinet etc but no Internet. So the Maal which consisted of flimsies and typewritten presentation had to be physically brought to Agra. Snail mail would have taken at least 10 days, the Maal being confidential and the AOC did not have the time for it. It was the job of “Dhukku” the navigator, a Kashmiri with a tremendous sense of humour, to collect the Maal.

Jock tried to figure out which one was the real intention, but gave it up, consoled that he would be flying and that is what mattered.

Flying to Poona and the landing was uneventful. They went to the crew room and refreshed themselves. Dhukku was busy collecting the Maal thereafter while Jock was back on the tarmac doing his bit of ensuring refueling in the correct manner etc, he was told that the aircraft had a problem and it will take about an hour to repair.

So they had lunch and then the Engineering Officer said that the snag has been rectified but it will need a check in the air. Jock had not yet been cleared to carry out an Air Test. It was solved by calling it a Handling sortie – a short one to get airborne and check if the snag was cleared, land back, get the documentation cleared and the fly back to Agra. Jock flew the Handling sortie and the snag was cleared to his satisfaction and landed back.

While taxiing to the dispersal Jock asked Dhukku to take a check if they needed more fuel and called out the tank contents of five tanks individually so that Dhukku could add it up. Dhukku said that additional fuel was not required, so Jock, relieved, waved off the refueller with a flourish, as refueling would have taken additional time and last landing time was closing in at Agra with anticipated mist/fog. Jock was not qualified to fly the Canberra at night yet.

Documentation done, they got airborne for Agra and soon to kill the monotony, the conversation drifted to whatever else was happening in the Squadron, Base, Movies - especially actresses, the Country and the World, with brief interjections from Dhukku, like turn left 50 or some such matters that affected flying.

The flying time was expected to be 1:30 and after about 45 minutes, Jock called out the fuel figures, tank wise and Dhukku added it up and they realized that they do not have fuel to reach Agra. They did the addition thrice, expecting a miracle, but the result was the same. A Canberra short of fuel was never heard of. Dhukku had made a addition mistake while checking fuel at Poona after the handling sortie.

Jock realized that there was no airfield en-route to land as Gwalior with a short runway was a helicopter-base used by the Army and it was unusable as God alone knew what would be on the runway especially after working hours. By the time they could have got it cleared Jock would have crossed Gwalior. The diversions were Jaipur and Palam, both farther away from Agra. The option to turn back to Poona was closed as it would have taken more fuel for that – they were beyond the point of no return.

Jock, was faced with a situation in which he had to use his superior skills to come out of. Not of his liking as the cardinal principle of fighter flying was “Never get into a situation where you need to use your superior skills to come out of – leave that to the enemy”. Besides cursing Dhukku for his addition skills, he was thinking hard for a solution to enhance the range with available fuel. Jock was feeling F@#$%d and Far from Home, literally.

They were at 40,000 ft altitude and cruising at 6750 Revolutions Per Minute (RPM) on both engines. Somewhere Jock had read that this setting gave uneconomical fuel consumption and the best Specific Fuel Consumption was at 7450 RPM which would give the least fuel consumption per Nautical Mile (NM) covered. Like the Maruti advt these days “Kitna Deti Hai” while buying a jet.

He also knew that the Canberra had excellent glide performance due to the near elliptical wing plan form. It could glide 2 NM for loss of a 1000 ft. So from 40000 ft he could commence a glide at 80 NM from Agra and would still reach the airfield with hardly any fuel consumption. 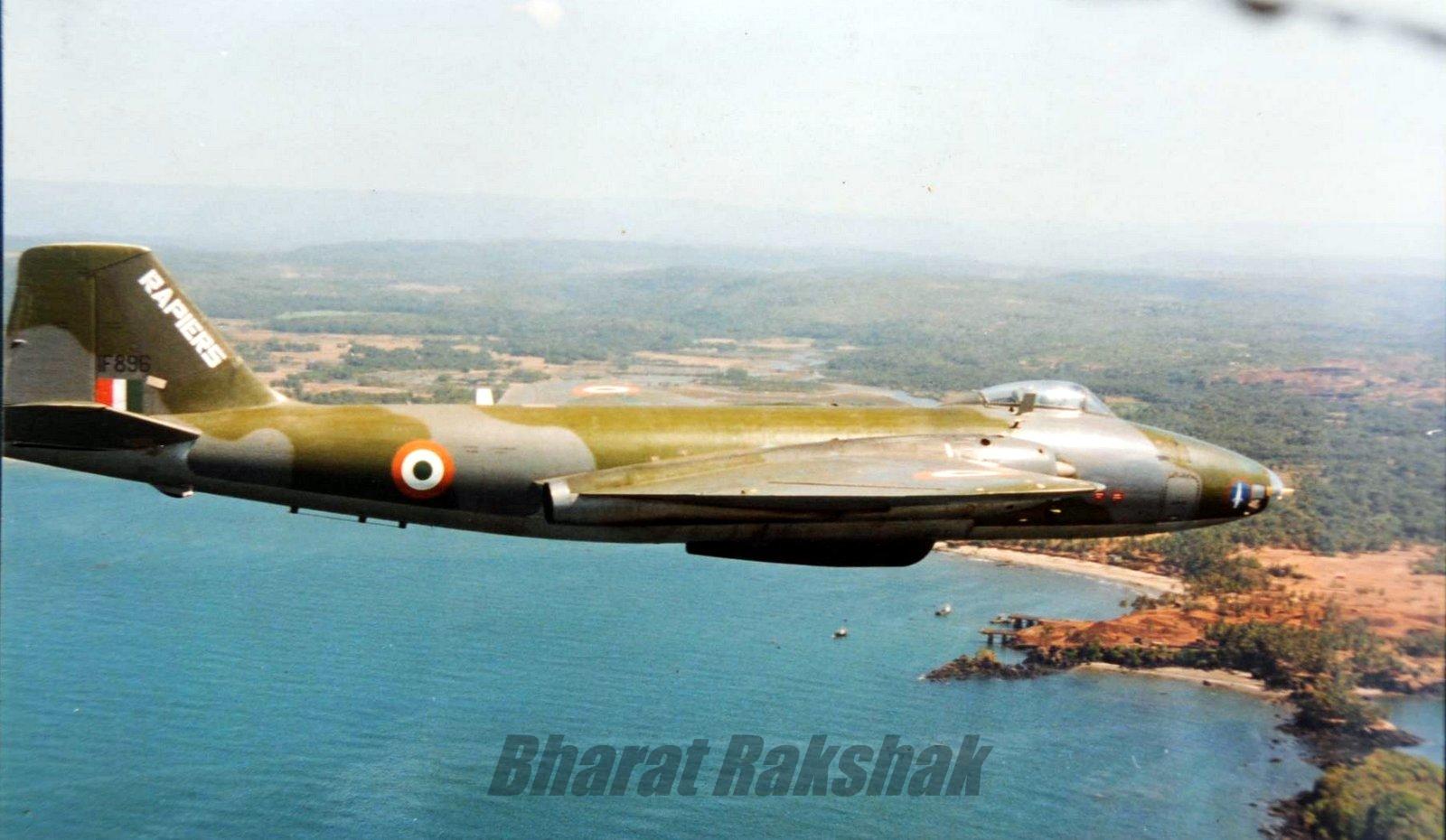 Engines consume fuel. He had two of them guzzling fuel. So he switched off the port (left) engine and increased the RPM to 7450 on the starboard (right) engine and trimmed off the pressures on the controls. With one engine switched off the fuel consumption would be lesser especially so when the other engine is at best SFC setting. He maintained altitude, converted the momentum into distance, the speed dropped gradually because of reduced thrust and settled to almost half. Fuel checks were carried out every 10 minutes with Dhukku not making a mistake and the results proving the point of fuel savings. Dhukku calculated the revised ETA (Estimated Time of Arrival) at Agra.

When Jock came into R/T range of Agra, he transmitted the revised ETA so that there was no panic on the ground. The experienced ATC officer smelt a rat and asked if everything was fine. A curt reply from Jock: Under Control, hinted that all was not well. At 80 NM from Agra, he throttled back the Right engine and set up the glide. The fuel figures responded accordingly but was depleting. When they reached 6000 ft, they realized that there was adequate fuel for a straight in landing but not sufficient for a botched approach – a go around for a next attempt.

The visibility was clamping down fast at Agra and may go below the minima within which Jock could land. This would have resulted in a diversion to Jaipur as the visibility at Palam was also clamping down. So he relit (re-started) the Port engine and fought the urge to accelerate so that he could beat the visibility problem. Landing was always better with 2 engines running. The ATC transmitted the weather in a tone that conveyed to Jock that visibility was not too good. There was no margin for error so Jock flew the aircraft with all concentration to ensure that nothing went wrong on the approach and a successful landing was achieved at Agra from a straight in approach with hardly any fuel to spare.

As is customary, he rang up the Flight Commander and told him that he was back and the Maal had been brought. The Flight Commander asked him: What took you so long? There was a lump in his throat, but he managed to reply that there was a snag in the aircraft at Poona and took time to get it cleared.

"Dhukku"  Deepak Hukku passed away in Pune on 12 Apr 14 after battling oral cancer.

Johnson "KoolKat" Chacko - The only Canberra pilot to successfully convert to the MiG 25, Johnson ‘Jock’ Chacko, a Qualified Instructor, Flt Cdr, Missile Cdr, Staff offr/DS trained abroad with tenures in DSSC & LDMC, had his career blowing in the wind ,after suffering from intense bleeding inside the eyes. He had to call it a day, though was seen as a rising star by his peers. Though characteristically unconventional, he had a long innings in service life. His profile, a candid honest account of a full well lived life. His appointments in the corporate sector were equally impressive. Because of his many qualities he went from strength to strength. He worked as a profit center head for an International Property Consultancy firm in Bangalore responsible for South India and presently a freelance Electronic Surveillance Consultant thanks to the IAF, specializing in Electronic Warfare and Strategic Recce. He is also actively involved in enhancing agriculture production without use of chemicals and fertilizers.