Kartar Singh Saund was one of the six children of  Jagat Singh, a Public Works Inspector in the Western Railways.   Jagat Singh had six children, Kartar was the fourth oldest and the first son.  He had another younger brother Satnam Singh Saund.  He studied at the Khalsa College in Amritsar, completing his Fellow of Science (F.Sc) around 1939-1940.  Immediately after graduation, Kartar was married off - and soon after Kartar joined Medical College to pursue a medical degree. However the call of adventure beckoned him in the form of the Second World War and the call for young men in India to join the fledgling Indian Air Force. Kartar answered the call and applied for a commission in the IAF.

Training in the IAF 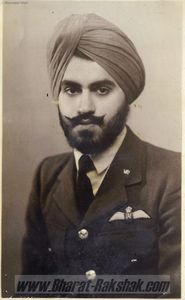 Kartar Singh cleared the interview, however failed to clear the medical due to pyorriah - an infection of the gums.  This was overturned by the RAF Officer who was the chairman of the interview board. The interviewing officer, fully impressed by the tall smart Sikh youngster keen on joining the IAF insisted that Kartar Singh's selection be cleared at any costs.  And in due course, Kartar was accepted into the Indian Air Force.

Karrtar Singh  was commissioned in the Indian Air Force Volunteer Reserve on 6th January 1941  (IND/1664), . He was part of the No.6 Pilot's Course which reported to the Initial Training  School at ITS Lahore on  the very day they got their commisisons. The course pilots were there till May 1941, before passing out.

The Flying training was carried out in two parts, the first three months with the  Initial Training Squadron, and the subsequent three months with the Advanced Training Squadron (ATS).  Most of the flying was carried out on Harts and Audax aircraft, with a few pilots flying the Wapiti from time to time.  Kartar Singh Saund's name finds mention in many movement orders as part of the ATS.

But before joining No.2 Squadron, Kartar had a family commitment to take care of.  Kartar  had one younger sister, younger to his brother Satnam Singh.  - and she married Asa Singh Hunjan, a class mate of his younger brother Satnam, hailing from the same college that Kartar graduated. Kartar took leave after his SFTS training to attend the marraige sometime in February 1942, and returned to No.2 Squadron soon after. No.2 Squadron had just then started converting to the Westland Lysander, the second such unit in the Indian Air Force. Saund had been posted right in time to gain expertise in the relatively modern aircraft.  Saund took part in various exercises and flights with No.2 Squadron and finds frequent mention in their diaries. 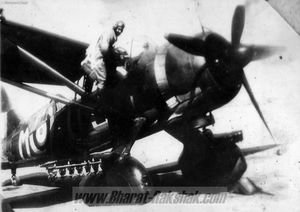 On one occasion he went to collect an aircraft from Madras and was detained on suspicion of being the enemy. There must be some interesting story behind this but the bare details are all we know!  No.2 Squadron started giving up its Lysander aircraft towards the end of 1942.  On 17 Sept 1942, he led a ground party to Risalpur - a percussor to training on the Hawker Hurricane fighter.  The Conversion course was completed by 1 Dec 1942 and the Squadron moved to Ranchi to undergo training in advanced fighter tactics. In the first week of February 1943, the Squadron moved to Bhopal to undergo a course in armament training, which ended on 16th March 1943, at which time they moved back to Ranchi.

On the frontlines at Imphal

The War diary of No.2 Squadron is missing a considerable period from the conversion day and upto September 1943. The Diary has missed recording an important portion of the Squadron's history - the posting of a small detachment of six pilots under Flight Lieutenant Edwin Nazirullah to Imphal. As narrated in the Official History of the IAF:

"In April 1943, a detachment of the squadron, under F/Lt. Nazirullah went to Imphal for operations, returning on 25 May. It was when increasing difficulty was being experienced in following the movements of the various withdrawing units that a detachment of No. 2 Squadron I.A.F. was sent from Ranchi to Imphal. Seven Hurricanes reached Imphal by 13 April and commenced operations on the 15th. The chief task of the pilots was reconnaissance over the scattered groups of Chindits. It consisted mainly in pinpointing their positions and then returning to the base to lead the supply­ dropping Dakotas to the appointed spot. It often involved flying just above ground level, as otherwise observation was impossible in the dense jungle, especially as the Chindits dared not show themselves too openly for fear of being discovered by the Japanese patrols which were never far off. The Hurricane was not a long distance flier and the Chindit groups were beyond its range. The Hurricanes were therefore fitted with extra fuel tanks to enable them to stay longer in the air. The average duration of the sorties flown by them varied from 3 to 31 hours. The detachment remained in operation until 26 May after which it was withdrawn. In the course of these 41 days the pilots flew a total of 148 sorties out of which 70 were contact, 60 tactical, 15 photographic, 2 offensive, and 1 escort reconnaissances. It will thus be seen that though contact reconnaissance was their main task, the pilots carried out other jobs also. They strafed river craft and traffic on the Chindwin and Irrawaddy rivers, and trains on the Mandalay-Myitkyina railway and attacked Japanese ground troops and motor transport on the Kabaw Valley road. In the course of one of these sorties, a pilot flying over the Chindwin successfully attacked a small Japanese patrol and saved a wounded Gurkha soldier who was lying helpless on the river bank nearby. On 26 May the detachment left Imphal after being relieved by a detachment of No. 28 Squadron R.A.F."

Another book "The Eagle Strikes" offers just a little bit more detail - it says that the six most experienced pilots of the squadron were hand picked to go to Imphal  - Apart from Nazirullah, this included Kartar Singh Saund, and the six were sent in to support he famous "Chindits" operation.

Unfortunately No.2 Squadron had a couple of losses during this period. Kartar Singh Saund, happened to be one of them. On 8th April 1943, he was taking off in a Hurricane IIB (BW931) from Imphal, when the aircraft swung on takeoff resulting in an undercarraige collapse. The aircraft caught fire. Kartar is said to have initially got out of the aircraft safely, but made the fatal error of going back to retrieve his service pistol and some papers.  He suffered severe burns to his chest and his legs. He was evacuated to a field hospital immediately. His condition was too severe to evacuate him out of the war zone.

Hearing about the accident, Kartar's father - Jagat Singh rushed from Punjab to the hospital in Imphal. He was at Kartar's bedside throughout the time Kartar was recovering. However Kartar's body was raging a war with infection. A few weeks into his recovery, the doctors came to the elder Jagat Singh and told him that Kartar's chances of survival were bleak - unless they took a decision to amputate both his legs in which infection has set in.  The decision bore down hard on Jagat Singh - he could not visualise his son remaining invalid for the rest of his life - and perhaps in a decision that is debatable with today's world values, told the doctors that he didnt want Kartar to undergo the surgery.  It was a painful decison for both father and son - and ultimately Kartar lost the battle with the infection on 5th May 1943, when he succumbed to his injuries. Jagat Singh was heart broken. Kartar Singh was cremated on the battlefield.

It so happened that Kartar's brother in law, Asa Singh Hunjan and his wife, Kartar's younger sister were living in Jorhat, Asa Singh working as a supervisor in a Tea Garden. They received constant updates on Kartar's conditions. At one point they were told that the accident may have happened due to sabotage by nationalists (though this was quite unlikely to happen in wartime Imphal).  Two years after Kartar's death, Asa Singh found himself in Imphal working as a manager of a war time disposal dump.  He visited the site of Kartar's accident and  had a marker constructed at the spot where the crash occurred.  (The photographs on the right show Asa Singh in a jeep at the marker).

Kartar Singh's loss was just one of the blows to his father Jagat Singh's life. His younger brother Satnam Singh married twice without any children. Jagat Singh passed away in 1955.  Satnam Singh went on to work in the Burma Shell Company but passed away in the 1980s after a road accident during a morning walk in Bombay left him in a coma..

"I was shocked and amazed at my grandfather's courage and will power (in taking that decision) The agony of my grand father who unilaterally taken the decision to let him die peacefully without going through a handicapped life  for the rest of his life on the mercy of others ."

Kartar Singh's demise is noted in a war time news paper clipping (shown right). There is no record of his loss in No.2 Squadron's Operational Record Books - as the period dealing with the Imphal detachment is mysteriously missing. Thus the account provided by Kartar Singh's family and told via generations is an invaluable record of history.

Does the memorial built by Kartar's brother-in-law still survive in Imphal today? We do not know - but if it does, it is a silent tribute to  young handsome Sikh warrior who preferred to follow the spirit of adventure rather than a traditional medical career - and to his father who took that stoic and bold decision on that fateful day in the summer of 1943.