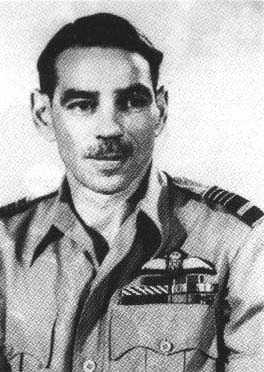 Ronald Ivelaw-Chapman was born in British Guiana in 1899, the son of a self-made and successful merchant family. He came to England in 1903, with his parents, and attended the Junior School at Cheltenam College later graduating to the Senior School. In 1917 at the age of 18 he enlisted in the Royal Flying Corps and was posted to No.12 FTS (Flying Training School) at Thetford and then to No.53 FTS at Narborough. He qualified for his Wings in January 1918 and in February, with the rank of 2nd Lieutenant, he was posted to No.10 Squadron RFC in France. Here he undertook mainly artillery observation flights along the Western Front and some bombing operations. He was awarded the Distinguished Flying Cross and soon after was promoted to the rank of acting Captain, taking over the command of the Squadron 'B' Flight.

At the end of the First World War, Flying Officer Ivelaw-Chapman, DFC, RAF volunteered for service overseas and was posted to No.97 Squadron in India in 1919. In 1923, he returned to the U.K. to serve as a test pilot with the Aircraft & Armament Experimental Establishment at Martlesham, Heathand and later, as an ordinary pilot, with two multi-engined night bomber squadrons. In 1929 he volunteered for overseas duty and spent a year with No.70 Squadron in Iraq taking part in the Kabul air evacuations. For his contribution to these operations he was awarded the Air Force Cross.

In 1930, he returned to the U.K. and married his fiancée Margaret. By this time Ivelaw-Chapman had made a name for himself in the Royal Air Force and was starting to be noticed. In the 1930s he was posted to various flying units in positions of command and attended the RAF Staff College as a student and, on graduation, spent 3 years with the Air Ministry involved in intelligence staff work. This was followed in 1936 by a posting to command No.6 FTS at Netheravon.

With the war clouds in Europe looming Ivelaw-Chapman returned to the Air Ministry and was engaged in rewriting the RAF War Manual Part One - Operations. He found this a heavy responsibility as it was clear that war was imminent. Early in World War 2, Ivelaw-Chapman was promoted to Acting Group Captain and took over as station commander of Linton-on-Ouse No.4 Bomber Group. After 10 months he was posted back to London to undertake further staff duties. During this period he was involved in intelligence planning staff work at the highest level which included the D-Day landings. With the rank of Air7 Commodore, he was posted to be a Base Commander in No.1 Group at Elsham Wolds in late 1943. In early May 1944 Ivelaw-Chapman flew in a Lancaster bomber as an extra crew member with Flt. Lt. Max Shearer RNZAF. The target was a large German ammunition dump at Aubigne Racan. After bombing the target the bomber was attacked by a night fighter and shotdown.

Only Ivelaw-Chapman and the Air Bomber, Sgt. Joe Ford RAAF, were able to escape by parachute. They were on the run in France, for several weeks, helped by many courageous French civilians. The loss of Ivelaw-Chapman on this operation caused considerable concern in London in view of the fact that he had extensive knowledge of the coming Allied invasion of Europe. Eventually he was captured in a raid by the Germans on the farm in which they were hiding. During the brutal interrogation by his captors he did not giveaway any information that would prejudice the D-Day operations. The Germans never fully appreciated his importance and Ivelaw-Chapman was soon transferred to a normal prisoner-of-war camp. He never forgot the bravery and courage of the French people who had helped him during his evasion and visited France several times after the war. He also remained a close friend of Joe Ford and his family, right up to his death. After the war Ivelaw-Chapman was promoted to Air Vice Marshal and took command of No.38 Group at Marks Hall. After 18 months he returned to London, this time to Whitehall, as the RAF Member of the Defence Research Staffand then to the Directing Staff of the Imperial Defence College, Belgrave Square. In 1950 Ivelaw-Chapman was promoted to Air Marshal and offered the post of Commander-in-Chief of the fledgling Indian Air Force. He was delighted to accept and spent 2 happy and eventful years in India.

Described In his own personal journal he refers to the exciting news that he received in 1950 of his posting to India to help the Indian Government set up the new Indian Air Force. The period between 1950 and 51 were a happy and eventful couple of years and most intriguing. Ivelaw-Chapman clearly enjoyed the country and the people and took every opportunity to tour India and the outlying units of the Indian Air Force. One of his earliest decisions was not to stay at Headquarters in Delhi for more than 10 days at a time and, during his two years with the RIAF, he made 59 trips away from Delhi. He visited every single unit of the RIAF at least once during this period. He was also very keen that the senior RIAF officers should not become "chair borne".

To set an example he used to fly a photo reconnaissance Spitfire XXI from Palam regularity for half an hour before breakfast when other commitments permitted. Soon other senior RIAF officers were clocking up the flying time in aircraft of their own choosing. Ivelaw-Chapman thought that the RIAF should seen to play a proper role in the Far East and led missions to Thailand, Burma, Malaya, Ceylon, Singapore and even to Car Nicobar, to promote the Indian Air Force in that part of the world. In December 1951 he was ordered back to the UK to take up the post of Deputy Chief of the Air Staff. He wrote back pleading to be allowed to stay on for another year to finish the job he had begun. Unfortunately he was needed back home and he was ordered by the CAS, Jack Slessor, to return to the UK.

On his return to the UK he took up the new post of Commander-in-Chief of Home Command at White Waltham. After 7 months he returned to the Air Ministry as Deputy and later Vice Chief of Air Staff with a seat on the Air Council. He retired from the service in 1957.