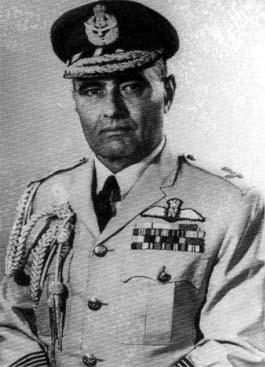 Hrushikesh Moolgavkar was commissioned in the Royal Indian Air Force on 30 November 1940. He was posted to No.1 Squadron flying the Hawker Harts after commissioning and soon converted to Lysanders. In January, when No.1 Squadron moved to Toungoo airfield in Burma in operations against the Japanese, young Moolgavkar was one of the lucky few who was part of the squadron. In the short time No.1 was involved in ops, Moolgavkar emerged as one of the keen pilots who would hog the flying. .

After returning from the Burma Ops, Moolgavkar served with No.4 Squadron as a Flying Officer, flying the Hurricane and Spitfire fighters. During operations on the Burma front, he did a total 280 hours of operational flying which included bombing, rocketing and gunnery. During the time he was promoted to Flt Lt and took over command of a Flight within the Squadron.

Providence saved young Moolgavkar early in January 1945. While operating from Hove, near Cox Bazar, Moolgavkar took off in a Spitfire. Just after takeoff the engine of the Spitfire cut out. While attempting to forceland the Spitfire on the sea beach, the aircraft nosed over and lay upside down in the shallow water, with Moolgavkar hanging upside down from his seat still in his straps. As the tide rose, Moolgavkar faced the prospect of drowning slowly as the water rose above his head level. A One in a million chance saw two British Commando Officers notice the wrecked Spitfire. They pulled out Moolgavkar from the aircraft, saving his life.

Moolgavkar suffered from several crushed vertebrae, and had to spend six months with his back in plaster. After returning from the Hospital, Moolgavkar commanded No.10 Squadron flying the Spitfire XIV from 09 May 1947 to 21 Feb 1948. He was posted to the DSSC to undertake a staff course.

Moolgavkar took over as the Commanding Officer of No.1 Operations Wing at Srinagar from Wg Cdr M M Engineer in late September 1948 when the Kashmir Operations were underway. Moolgavkar was responsible for planning and execution of close air support during the famous Zoji La battle. Sometimes Moolgavkar himself flew on these sorties. The venture exposed him to grave dangers. His determination, initiative and drive enabled the RIAF to render effective support to the Army. For his contribution in these operations, Moolgavkar received the Maha Vir Chakra for exceptional gallantry and leadership. His was one of the four MVC's awarded to the IAF for the Kashmir Operations.

In February 1949, an Aircraft Testing Unit was formed consisting of pilots of No.7 Squadron. The ATU received four Vampire F3 fighter bombers which were the first Jet fighters for an Asian air arm. Wg Cdr Moolgavkar was put in charge of the ATU on its tour of India. He was one of the first to convert to the Vampire at Poona and soon after took the aircraft to Bombay, and Madras on pubic displays around the country.

In 1951, Moolgavkar was Director of Operations in the rank of Group Captain. He was in France in 1953 for the evaluation of the Ouragan aircraft and He led the first flight of four Ouragan fighters flown to India all the way from France. It was during time that he flew a Mystere II fighter bomber and became the first Indian to fly faster than sound.

In 1954, he was part of the team under Air Cmde P C Lal along with Flt Lt Roshan Suri, which went to France and UK to test and procure a second generation Jet Fighter for the IAF. He test flew both the Mystere IVa and later the Supermarine Swift. The team came back after having decided on the procurement of the Mystere IVa. During the same trip , He was also one of the first to fly the Midge fighter , which later became the Folland Gnat.

1957 found him as the Station Commander for Palam, which then had Vampires of No.7 and No 10 Squadron under him. He was promoted Air Commodore in 1964 and posted to Maintenance Command HQ as the Senior Air Staff Officer, in which position he was serving during the 1965 War. He came back to Air HQ as a staff officer and later on, after promotion to Air Vice Marshal was appointed the AOC-in-C Central Command. It was during his tenure that the Sukhoi-7 BMK fighter bombers were inducted into his command. After the tenure at Central Command was over, Moolgavkar took over command of the National Defence College in Delhi at the special request of Air Chief Marshal PC Lal.

He took over as the AOC-in-C Western Air Command in 1973. and soon after in 1976, he was awarded the PVSM for distinguished service. Not soon after, on 1 Feb 1976, he took over as the Chief of Air Staff of the Indian Air Force. From then till the end of his tenure in Oct 78, when he handed over the baton to Air Chief Marshal Idris Latif, Moolgavkar took upon himself the task of bringing under control, the IAF's accident rate. He was always known as a stickler for flight safety, even from his Station Commander days. Now as the CAS, Moolgavkar implemented several reforms and rules that saw improvement of flight safety across the whole of the Indian Air Force. Moolgavkar always maintained his flying status. Even as the CAS, he would go on flights on IAF MiG-21s, which also included the first flight of the HAL built MiG-21M [C-1531].

Upon retirement Air Chief Marshal Moolgavkar settled down in Pune.

In 2009, his narrated his experiences to his daughter Ms Jyoti M Rai who published them in the form of a Biography "Leading from the Cockpit: A Fighter pilot's story"