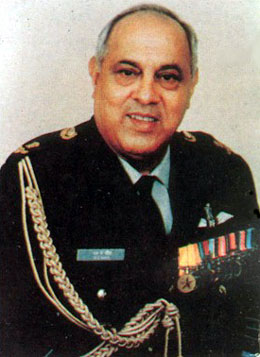 Swaroop Krishna Kaul hails from a well known Kashmiri Pandit family settled in Lucknow. Son of a railway employee, He was born on 20th December 1934 in Kashmiri Mohalla at Lucknow. His schooling was done at Beseant college in Varanasi and did his graduation from Governemtn College Allahabad in 1951.

Kaul joined the National Defence Academy in December 1951 and went on to get commissioned in December 1954 in the IAF. His first posting was to No.17 Squadron at Adampur flying Vampire FB52s. He later went on to fly the Mysteres. Selected for the QFI course, he went to the Flying Instructors school in 1960 to Jodhpur.

Kaul got married on 11 December 1962 at Bhopal in Madhya Pradesh with Nita the daughter of Pt. Chand Narain Raina who was a reputed Urdu poet. At that time he was with the PTE in Bamrauli providing training on the HT-2s.

After completing this stint, "Pandit" Kaul went on to No.3 Squadron flying Mysteres at Pathankot. He was involved in the Operations right from Sept 1st, when the first Mystere sorties were launched against Pakistani Army formations in Chamb. He was involved in missions against Chamb, Pasrur, Phillora Chawinda Sector and other areas. By the time the war ended, he had accumulated nearly 28 sorties. His effort led one of his squadron members to comment that "Pandit was one of the few who deserved a Vir Chakra but did not get recognised". Kaul would have to wait six years before the recognition came his way.

After the war, promoted to the rank of Wing Commander in 1970, Kaul took over No.37 Squadron then flying the Hawker Hunter. No.37 was based at Hashimara before the outbreak of war in 1971. No.37 was involved in recce sorties even before full scale hostilies had broken out. Kaul had done extensive recce missions in the Comilla, Sylhet and Saidpur sectors. On the first day of the full scale hostilities, No.37 carried out a four aircraft raid against the Dacca airfields. They were met with F-86 Sabres of the PAF, but not only did Kaul's formation gave the slip to the Sabres, but one of Kauls wingmen, Fg Offr Harish Masand shot down a F-86 Sabre.

Further missions were flown during the war in which Kaul led from the forefront, including the attack on Governor House and Dacca University. For his contributions and leadership, he was recognised with an award of the Maha Vir Chakra.

After the war, Kaul took over as the COO of Pune AFS after the death of Wg Cdr Gautam. Later as a Group Captain , he went to the directorate of Air Intelligence at Air HQ. His first station command was the Air Force station at Bareilly, which was home to two of the leading Electronic Warfare and Strategic Recce Squadrons in the IAF.

A stint as the Air Attache in the Indian Embassy at Moscow followed during 1982 till 1986. After his return from Moscow he was posted as the Director of Personnel (Officers) at the Air Force Headquarters at New Delhi.

He was then made the senior Air Staff Officer at the South Western Air Command at Jodhpur in the rank of Air Vice Marshal. Around 1989 he was appointed as the SASO in CAC at Allahabad and later in February 1991 he became AOC-in-C of the Central Air Command and he remained on this post up to 30 April 1992. He received the Param Vishisht Seva Medal in 1992 in recognition of his work as top post of CAC.

On 18th May 1992 he was appointed as the AOC-in-Chief of the Western Air Command, which is the largest and one of the most important operational command of the IAF to keep a constant vigil on the western border of our country. On 31st July 1993 he was appointed by the government as the Chief of the Air Staff. He retired from this post on 21 December 1995 after putting in 42 years of active service in the Indian Air Force. In November 1994, he was also appointed as Chairman of the Chiefs of Staff Committee.

He has over 3700 hours of accident free flying record to his credit from the Vampires in the 1950s to the latest MiG-23, Jagaur, MiG-29, and Mirage-2000 aircrafts. After his retirement from service he settled down in the Gurgaon.

Thanks to Dr. BN Sharga http://www.kashmirsentinel.com/mar2003/mar2003.html