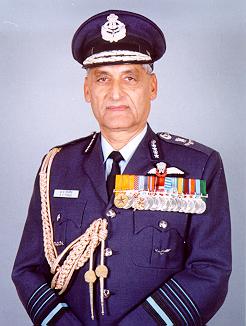 Anil Yashwant Tipnis was born on 15 September 1940, and did his education at Barnes High School, Deolali. His initiation into the services started with him joining the 15th Course of the National Defence Academy (NDA) in January 1956. After which he moved on, for flying training to the Air Force Flying College in January 1959.

Anil Yashwant Tipnis was commissioned into the Indian Air Force (IAF) as a fighter pilot on 28 May 1960. He finished his training with flying colors, receiving the coveted Majumdar Trophy for his excellent performance. The initial years of Tipnis' service were spent as an operational pilot in several frontline fighter squadrons.

His first posting was to a Hunter Squadron. In 1963, when Wg. Cdr. Dilbagh Singh (later Air Chief Marshal and CAS of the IAF) raised the first MiG-21 Squadron, Tipnis was one of the few pilots to be sent to No.28 Squadron to fly the MiG-21s. He was still serving with the First Supersonics when war broke out in September 1965, and he served with the Squadron during its operations in the war.

In 1966 he graduated as a Pilot Attack Instructor (PAI) and won the Naronha Trophy for standing first. This was followed, in January 1970, by a deputation to Iraq as a PAI. On return he was posted as the Flight Commander of No.45 Sqn which then served as a MiG-21 Operational Conversion Unit. He qualified as a Fighter Combat Leader at the IAF's prestigious Tactics & Air Combat Development Establishment (TACDE) in 1973 winning the Sword of Honour; he continued on staff as a flight commander of the Combat Development & Training Flight.

In 1975 he underwent the Defence Services Staff Course at Wellington following which, in July 1977, he took over as the Commanding Officer of No.23 Sqn equipped with MiG-21bis aircraft. Tipnis was one of the four officers short listed for the Indo-Soviet Joint Space mission. He underwent all the training required for the mission in the course of the final selection. After a couple of staff appointments and a stint at the National Defence Academy as the Chief Instructor (Air) and Battalion Commander, he was posted to France in October 1983 as the Team Leader for the Mirage Project Team in the rank of Group Captain, where he was responsible for the negotiation and purchase of the Mirage 2000 aircraft into the IAF.

On returning back to India three years later, he was posted to the Mirage 2000 base of the IAF, as the Air Officer Commanding, Air Force Station Gwalior in the rank of Air Commodore. In 1989 he attended the Defence Studies Course at the National Defence College, New Delhi, and successfully completed it. Later on he was posted as Deputy Personnel Officer at Air HQ in New Delhi.

More important staff appointments at Air HQ and Command HQ followed. On promotion to the rank of Air Vice Marshal in June 1992, he was appointed the Assistant Chief of the Air Staff (Inspection) at Air Headquarters. In June 1993 he took over as the Air Officer Commanding J&K area. On being promoted to the rank of Air Marshal in September 1994 he took over as the Senior Air Staff Officer (SASO) of Eastern Air Command and later, in February 1995, was posted as the SASO of Western Air Command, the largest operational command of the Indian Air Force. In August 1995 he assumed charge as AOC-in-C of Western Air Command. He was appointed as the Vice Chief of Air Staff (VCAS) in April 1997. On 31 December 1998, he was promoted as Air Chief Marshal and took over as the 18th Chief of Air Staff. Upon his retirement on 31 December 2001, he completed 41+ years in uniform.

His tenure saw the first deployment of Indian Air Force combat aircraft in action since the 1971 War. When the fighting at Kargil erupted, the IAF was deployed to attack intruders positions in the high altitude areas. Needless to say the IAF acquitted itself very well in these limited actions. Throughout the course of operations, the Air Chief Marshal was deeply involved in overseeing the conduct of operations. Along with the then-Army Chief, General V.P. Malik, he visited the frontline units and forward areas to get a feel of the progress of the operations.

He is keen on outdoor activity and plays golf and tennis regularly. His other outdoor activities include gliding and sailing. His passion for flying continues till today, and he loves being in the cockpit, be it that of a glider, helicopter, transport aircraft and particularly of a fighter. He continued to maintain his currency on fixed wing (fighters and transport aircraft) as well as rotary wing aircraft during his service as Air Chief.