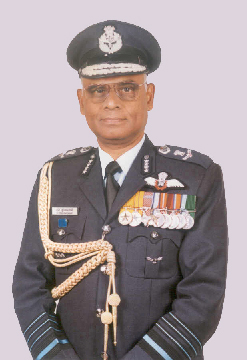 Air Chief Marshal Srinivasapuram Krishnaswamy became the 19th Chief of Air Staff on 31 December 2001. Air Chief Marshal S. Krishnaswamy was commissioned in the Indian Air Force in 1961. He is operational on a number of combat aircraft including the Mirage 2000. He flew the Gnat fighter aircraft during the 1965 Indo-Pak War and was awarded Mention in Despatches for his contribution. Subsequently, he was sent to UK to undergo Test Pilots Course. On his return, he joined the Air Force Flight Test Centre – Aircraft and System Training Establishment (ASTE).

Air Chief Marshal Krishnaswamy, as a test pilot, was involved in flight testing and evaluation of Military as well as civil aircraft and weapon systems. For his outstanding contribution in indigenous development programme he received the 'Agni Award for Self Reliance' in August 1999. He has more than 4000 hours of flying experience and has captained over 30 varieties of aircraft and helicopters. He was also trained as a Fighter Combat Leader (FCL) and served as Senior Instructional Staff at the Tactics & Air Combat Development Establishment (TACDE).

Air Chief Marshal Krishnaswamy specialised in Electronic Warfare (EW) and had the unique distinction of having raised and commanded the first EW Squadron of the Indian Air Force, comprising a mix of MiG-21 and Canberra aircraft. He has held a variety of operational and staff appointments during his career. Besides the command of a Squadron, he did a tenure as Chief Operations Officer of a Mirage-2000 base and commanded Air Force Station, Pune. In senior appointments, he has served as Assistant Chief of Air Staff (Plans), Deputy Chief of the Air Staff and Air Officer Commanding-in-Chief of three Operational Commands viz., Central, South Western and Western Air Command. He took over as the Vice Chief of the Air Staff in August 2001.

A graduate of Defence Services Staff College, he is an alumnus of the National Defence College. Air Chief Marshal Krishnaswamy is a recipient of Param Vishist Seva Medal, Ati Vishist Seva Medal and a bar to Vayu Sena Medal. He was born in Chennai in January 1943 where he went through his schooling and college education. He is married to Mrs. Harveen Krishnaswamy, has two daughters and two grand sons.