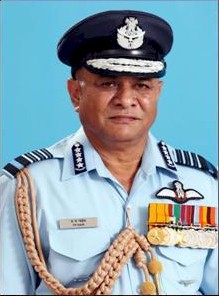 Pradeep Vasant Naik was born on 22 July 1949 and commissioned into the Indian Air Force on 21 June 1969.  After initial schooling in Sainik School Satara, he graduated with the 33 Course from the National Defence Academy.

In a distinguished career spanning forty years, the CAS has flown a wide variety of combat and trainer aircraft.  After initial training on the HT-2, he has flown the Vampire and the Hunter, and has had extensive operational experience on all variants of the MiG-21.  He is a Qualified Flying Instructor with vast instructional experience and a Fighter Combat Leader from the prestigious Tactics and Air Combat Development Establishment (TACDE).  He was selected as one of the first eight pilots to convert on to the MiG-23 BN in the erstwhile USSR, and was responsible for its induction into the IAF.  Besides commanding a front line fighter squadron, he has commanded an important fighter base and Air Force Station Bidar.  He has been Directing Staff at TACDE and the Defence Services Staff College.

During his career, the Air Chief Marshal has held numerous important staff appointments at different Headquarters.  He has been the Senior Air Staff Officer at HQ Western Air Command, the Air Officer Commanding-in-Chief of Central Air Command and the Vice Chief of Air Staff, prior to his appointment as the Chief of the Air Staff.

The Air Chief Marshal was a graduate of the Defence Services Staff College, and an alumnus of the National Defence College.  He is a recipient of the Param Vishisht Seva Medal and Vishisht Seva Medal.  He has been appointed Honorary ADC to the Honourable President of India.

He is married to Madhubaala and they have two sons.  The elder son is a pilot in the IAF and the younger is a Chief Officer in the Merchant Navy.  The Air Chief Marshal is fond of Cricket, Golf, Volleyball and Indian Classical music.