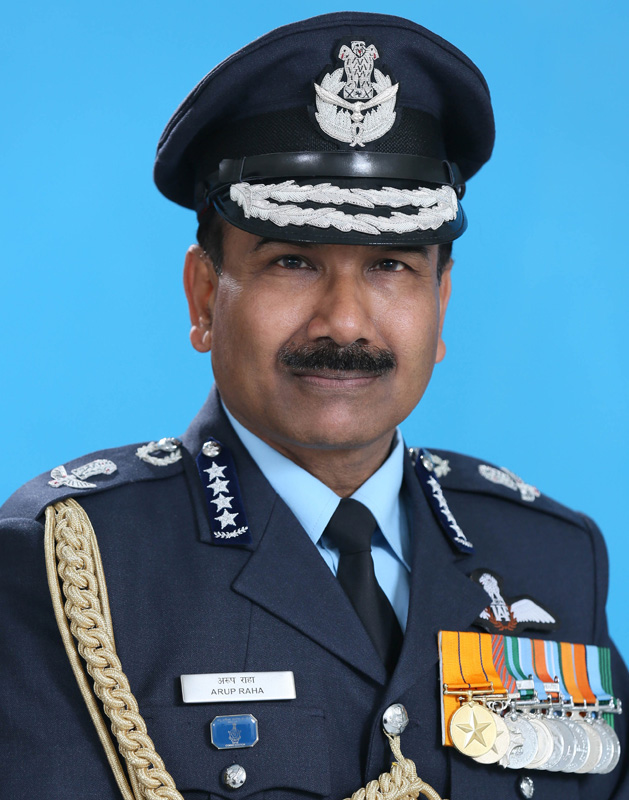 Air Chief Marshal Arup Raha PVSM AVSM VM ADC (13910 F(P)) graduated from the National Defence Academy, Pune with the President's Gold Medal in 1973 and was commissioned in the Flying Branch in Dec 1974

Air Chief Marshal Raha is an experienced fighter pilot. He is a Cat A Qualified Flying Instructor and a Fighter Combat Leader with nearly 3400 hrs of flying experience, mainly on fighter aircraft. He has served as a Directing Staff at two premier institutes of IAF, Flying Instructors School and the Tactics and Combat Development Establishment. He has functioned as an inspector in the Directorate of Air Staff Inspection in Air Headquarters and as Staff Officer to the Chief of the Air Staff.

He was deputed as the Military and Air Attache in the Embassy of India, Kyiv, Ukraine from 1999 to 2001. He has held many operational assignments such as Commanding Officer of a MiG-29 Squadron, Station Commander of Air Force Station Bhatinda in Punjab during 'OP PARAKRAM', Air Officer Commanding Air Force Station Adampur and Advance Headquarters Western Air Command, Chandimandir. He has also served as the Deputy Commandant Air Force Academy, Hyderabad and Senior Air Staff Officer at Headquarters Western Air Command.

Air Chief Marshal Raha is an alumnus of Defence Services Staff College and the National Defence College, Delhi. For his distinguished service, he has been awarded Param Vishisht Seva Medal, Ati Vishisht Seva Medal and Vayu Sena Medal. He was appointed as Honourary Aide De Camp (Air) to the Hon'ble President of India wef 01 Dec 2012.

Air Chief Marshal Raha is married to Mrs Lily Raha and has two children. He is an avid reader and a keen golfer who enjoys travelling.