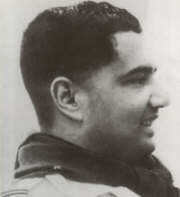 Wg. Cdr. Karun Krishna Majumdar, gave the fledgling Indian Air Force its first war hero in World War 2. A born leader, and a daredevil of a pilot, somewhat reckless to his friends, Majumdar was the only pilot in the IAF to be decorated with a Bar to the DFC. Majumdar would have been destined to reach the topmost position in the Indian Air Force, that of the Chief of Air Staff, if fate has not decided to intervene.

Majumdar, popularly called as "Jumbo" started his flying career after training at RAF Cranwell. On commissioning he joined No.1 Squadron as Flying Officer in the Mid 1930s. Flying a variety of aircraft, first the Wapiti, then on to the Hart. He was quickly identified as leadership potential and very soon was put as Flight Commander of 'C' Flight of the No.1 Squadron. Promoted to Squadron Leader, Majumdar took over command of the No.1 Squadron in June 1941, when it was based at Miranshah, NWFP. The squadron after its conversion to Westland Lysanders in August 1941 was moved to Drigh Road for training. At the onset of the hostilities after the Japanese attack on Pearl Harbour and Malaya, Jumbo Majumdar and his command were put to test immediately. The No.1 IAF Squadron was posted to Burma.

The Squadron was reached Toungoo airfield on 1 Feb 1942. The Japanese Air Force attacked Toungoo the very next day, destroying allied airfield installation and aircraft, only the No.1 Squadrons aircraft were unscathed. Majumdar immediately planned a retaliatory raid on the Japanese airfield at Mae-Haungsan, from where the attackers took off. Even though the Lysander was an Army Cooperation type, its employement in offensive bombing missions was unheard off.

The next day, when Majumdar took off in a solitary Lysander armed with two 250 lbs. bombs, the New Zealanders of the No.67 RAF Squadron which was sharing Toungoo, in sheer admiration and respect for this young Indian who was taking on the Japanese, sent an escort of two Buffalo fighters to the Lysander. Majumdar flew at low level, almost skimming tree tops to achieve complete surprise at the Japanese airfield. He dropped his bombs with unerring accuracy on a aircraft hanger at the airfield, destroying it as well as the aircraft in the hanger.

The very next day, Majumdar was in the thick of the action again, this time he led the whole squadron on a bombing mission on the airfield, destroying several buildings, wireless installations and aircraft on the ground. These lumbering Lysanders would have been no match to the Japanese Zeros and Oscars. But it was the Indian Pilots courage and skills that made them take such risks. From then till the fall of Rangoon in April, the Lysanders provided close air support work for the Army. Finally withdrawing after handing over their Lysanders to the Burmese Air Force.

Jumbo was awarded the Distinguished Flying Cross (DFC) for his leadership of the squadron during the Burma Campaign. Thus becoming the first Indian Officer to be so decorated during World War 2. After spending two years in India in various staff and flying assignments, Majumdar returned to the front. Now a Wing Commander, he volunteered for a posting to No.268 RAF Squadron flying Spitfires during the allied invasion of Europe. His role in reconnoitering the Falise-Gap sector and other areas earned him further laurels.

On his return from Europe, Majumdar was awarded a Bar to his DFC in January 1945, again the first and the only Indian to be so decorated. He then participated in the Indian Air Force Display Flight, and toured the country conducting aerobatic shows and displays to attract and bring to the public notice, the Indian Air Force's exploits. The aerobatic sessions were much demanding on the pilots, which required plenty of practice flying and rehearsal sessions.

It was on 17 February 1945, Majumdar decided to do an aerobatic practice sortie in a Hawker Hurricane. The aircraft he chose had a previous history of snags and problems, and disregarding the advice of his friend and compatriot, Fg. Off. Harjinder Singh, (later AVM), Majumdar took to the skies in the Hurricane. In the midst of the aerobatic routines which involved a dive, one of the undercarriage legs, unlocked itself from the wheel well and deployed down, upsetting the aircraft's stability. The Hurricane stalled and crashed headlong into the ground, killing Majumdar instantaneously. Majumdar died as he wanted to live, carefree, daring and at the controls doing what he wanted to, fly to his heart's content.