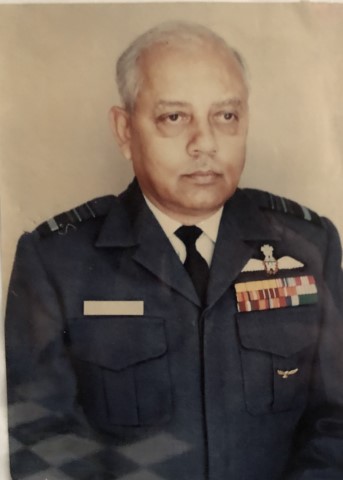 On January 10, 2014 I lost a very dear friend and colleague of exactly sixty years standing, to the day. The only small consolation is that he had really lived his life very well. A long life may not be full enough, but a full life is long enough. All the same I will badly miss my friend Babi very much. My eldest daughter was shocked to get the news of the passing away of her favourite Uncle. She had known him from the age of three when mutual teasing started between the two. She loved this interaction and attention and after seeing My Fair Lady a few years later often responded to being named "ganamana-junglee-bhooth" with calling him Henry Higgins, or at times 'enry 'iggins in true Eliza style.

Partha Kumar Dey was born on 30 March 1934. His father Mr SK Dey was an ICS officer who was seconded to the international Food & Agriculture Organisation with its headquarters in Rome. Partha Kumar was soon given the nickname, Babi, perhaps derived form of the plural word Babiyeh which in Bengali means Miraculous Things. Other explanations may also be valid, but known only to the close family. The nickname Babi became so common that many people never learnt his full name.

Babi Dey attended the Rashtriya, Indian Military College (RIMC) Dehra Dun..It was established in 1922 for training native Indian cadets for an entry into Sandhurst. It was inaugurated by the Prince of Wales on 13 March 1922, and named the Prince of Wales Royal Indian Military College. Royal was changed to Rashtriya in 1947 when India became independent. Over the years its alumni have included many leaders of society, both military as well as civil. Its Principal even after independence carried so much clout that on his recommendation Babi was accepted for IAF before he completed High School – perhaps a unique occurrence. He joined Course No.2 JSW (Joint Services Wing) of the Indian Military Academy.

Babi attended No. 59 Pilots Instruction Course and was commissioned on 17 January 1953, still 43 days before his 19th birthday. These 43 days did not count towards his qualifying service but almost certainly made him then one of the youngest Pilot Officers of IAF. In due course, he joined No. 7 Squadron, the Battleaxes where we first met on January 10, 1954 on my return from the Pilot Attack Instructor (PAI) training in the UK. Thus, perhaps I knew him for full six decades, longer than most people, including his wife.

From No. 7, with fair experience on Vampire 52 fighter aircraft, he moved to No. 10 Squadron flying Vampire NF 10, Night Fighters. Under the Command of Sqn Ldr David Bouche, Babi as a front rank pilot of No. 10 soon built up his flying hours and exceptional flying abilities. Of special importance were flying at night usually on instruments only, with no helpinorientation from the outside world due to darkness or bad weather. Meanwhile, A Sudhakaran and I had been sent to the Empire Test Pilots School as BSc graduates. As soon as the course began, I sent a signal to Air Hq that it contained no graduates from the RAF or the Royal Navy. I suggested some criteria for selection to broaden the pool of potential test pilots. Inder Mohan Chopra (Chopie) and PK (Babi) Dey met these with ease and were selected for the next course of 1957. Their selection was fully justified and resulted in IAF getting two exceptional test pilots.

Wing Commander IM Chopra (Chopie) became the Chief Test Pilot of HAL, took premature retirement from IAF, in time switched to management and eventually became Chairman of HAL. Chopie's contributions to aeronautical development in India were simply outstanding. Hopefully, these will be recorded for posterity some day. Meanwhile, Babi's test flying career was absolutely unique. He qualified as an experimental test pilot on completing the course at the ripe old age of 23 years and nine months, still holding the rank of a Flying Officer. This is a record almost impossible to break, ever, certainly in any modern air force.

On completion of the Test Pilots Course No. 16, both Chopie and Babi were attached to Hawkers for test flying experience. From it in a sudden move Babi was pulled out and deputed to Folland Aircraft Ltd, Chilbolton to help test the Gnat fighter aircraft. In this job he became the assistant of (then) Wg Cdr Suranjan Das and together they completed a fair amount of the development of the aircraft, with the rest to be executed in India. His work on the Gnat was greatly admired by Follands..

It is perhaps the right place in this piece to describe how apparently very minor things can become the means of disaster for test crew. On the prototype at Chilbolton a small probe to measure air temperature was fitted on the nose ahead of the cockpit and its wind shield. The probe helped show the temperature on a gauge in the cockpit of the air hitting the small finger sized probe. After doing the tests at lower speeds Babi had to test it in a supersonic dive. As the aircraft exceeded the speed of sound, it violently swung to one side due to the probe disturbing and deviating the airflow. If Babi had not promptly controlled it, the fin and rudder of the aircraft would have broken off leading to a major accident and perhaps a fatality. To the best of my knowledge this was the most dangerous moment in the flight testing life of Babi Dey.

In 1959, Hindustan Aeronautics Ltd (HAL) began the production of Gnats in India. Although I had handed over the post of Chief Test Pilot of HAL to Wg Cdr Roshan Lal Suri, I bypassed him and went to see the Managing Director AVM Aspy M Engineer. He was the CEO as well, since we then did not have Chairmen at HAL. I explained to him that with the Gnats coming up for testing, HAL needed a test pilot with the right experience of the aircraft. On being asked who to get, I immediately named Babi. He soon joined us in HAL.

His sudden arrival at HAL got tongues wagging in IAF. It was alleged that he had pulled strings through his cousin Leila, daughter of former Union Minister Mr Humayun Kabir, married to George Fernandes, the socialist politician. Little did anyone realise that in fact he was posted to HAL by Flt Lt Kapil Bhargava, albeit with influence from the No. 2 man of IAF!

Later, Babi's contributions to flight testing continued to mount with periods in ASTE as its Chief Test Pilot and two tenures as its Commandant in the ranks of Air Commodore and Air Vice Marshal. Meanwhile, Babi met Miss Asha Damle, daughter of one of our eminent Medical Officers AVM Damle and they got married in December 1961. They had two lovely children, son Nikhil and daughter Deepshikha. Nikhil has dedicated his life to service of poor farmers and artisans in Rajasthan, often collaborating with Aruna Roy, the Ramon Magsaysay Award winner. One of these days Nikhil should get one in his own right. Deepshikha is the wife of AVM Anil Khosla, presently AOC J&K at Udhampur.

Babi had moved up steadily in IAF, eventually becoming the AOC-in-C of South Western Air Command on 1st August 1988. He retired from this post on 31stMarch 1992. Babi passed away on 10 January 2014 very suddenly to our utter shock. My wife, our kids and I will will miss him a lot and can only wish that his soul rests in eternal piece. We also hope that Asha and the rest of the family bear this sudden tragic loss with as much fortitude as they can muster. We offer them all our support for coping with these very hard days.