Bale Out from a Deepak

Bale Out from a Deepak

The HAL HPT-32 Deepak had a chequered career in the Indian Air Force - Introduced in the late 80s, it served for about two decades in the IAF, being used for the ab-initio flying training of IAF Cadets. Over the course of its career, more than 21 were lost in accidents.  Only three of these involved pilots successfully baling out - thus earning themselves membership in the Caterpillar Club.  The first such baleout was done by Flight Cadet M Sabharwal - later Gp Capt, 22122 F(P) . This is his account, first published in Flight Safety Magazine. 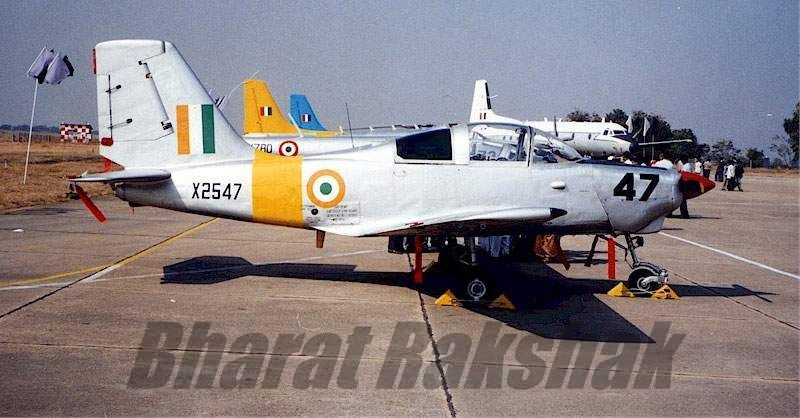 The HPT-32 Deepak had an outsized tail empennage compared to other aircraft - and bought with it, its own share of risks for pilots trying to make a quick exit

Well, this was my 22nd sortie in HPT-32 aircraft. I was in 1st semester of my Basic Stage Flying, at AFA. The sortie comprised of general handling profile of going into the sector, carrying out stall, aerobatics and rejoin. It was a ‘solo’ sortie, and that too just three sorties prior to my final test (FT). The weather was fine on that morning of May 1992 and I was part of the morning shift, waiting for my turn to soar. I took a running change aircraft from an instructor. After exchanging the usual report of ‘all ok’; I promptly carried out all checks and procedures, and soon I was airborne. I proceeded as per plan to the adjoining sector and climbed, as fast as the aircraft would permit, to the operating heights. I carried out a textbook stall and recovery and proceeded for a loop.

As I recovered from the loop, I glanced at my instruments and gave an ‘Operations Normal’ call. Suddenly, I found something splashed on the right side of the windscreen. It was dark brown in colour and by the time I could realise what had happened, that dark brownish substance (engine oil) had covered the entire windscreen. As if that was not enough, thick white smoke started entering the cockpit from the side air scoop. I tried my best to take stock of the situation, calming my nerves; I gave an R/T call to the Senior Flying Supervisor (SFS) in ATC. He asked me if I could land the aeroplane, to which I replied that I could not see anything in front and I had put the aircraft in a glide after switching off the engine. He then told me to “bail-out”!

The earlier attempts to bail out from HPT-32 had been unpleasant. In fact, there had been no successful bailout from HPT-32 aircraft till that date! One always lived in the belief that ‘this cannot happen to me’. Anyway, all this was brushed aside from my mind and within seconds I prepared myself to jump out and fly in the air, sans the aircraft. In the meanwhile I had jettisoned my canopy and, in fact, tried to wipe the oil from the windscreen using my glove. The speed of the  wind blast took me by surprise and prepared me for the inevitable jump. The speed was 150 Km/h and I was at around 1.0 Km above ground in the confines of my dear aircraft with which by now I had got very familiar. The decision to jump from that was definitely not an easy one. But I did not allow my thoughts to waver and remained absolutely focused. I had prepared myself by carrying out the drill of bailout by rehearsing it a zillion times in the confines of my room and in the aircraft (stationary on the tarmac).

First, the seat harness was removed, and then I stood on the seat holding the canopy rail. As per SOP one was supposed to get on the wing and dive behind the main-plane. The sheer strength of the wind blast and the gliding aircraft made it extremely difficult to do so. So, with a prayer on my lips, I decided to dive behind the main plane from the seat itself. That I succeeded in this is borne out by the fact that this article has got written.  Thereafter, the drill was to count 1001, 1002, 1003 and pull the ripcord. That brings me back to the beginning of this narrative. 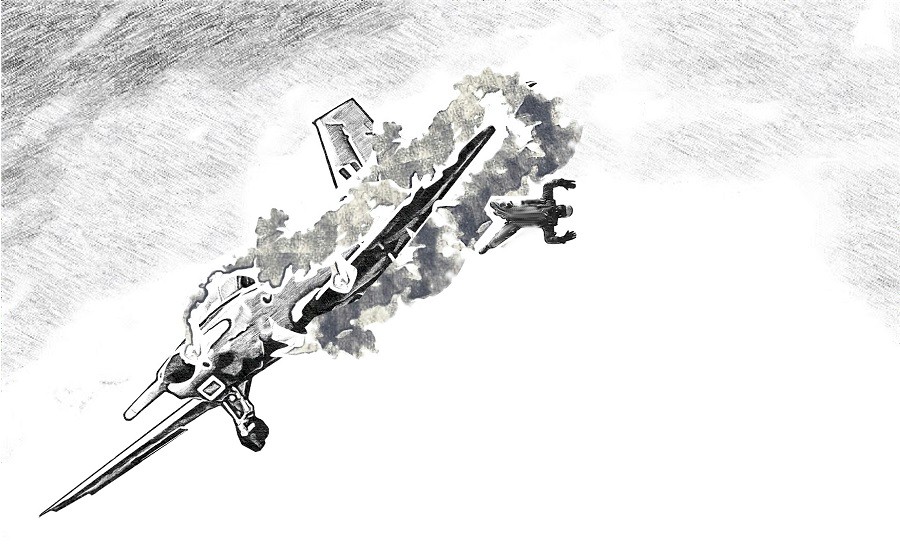 The leap of faith!  Jump from the cockpit - trying to avoid the massive tailplanes - then count to three before pulling the ripcord!

“Count one thousand one, one thousand two, one thousand three and pull the ripcord”. It seemed near impossible to achieve this in the condition that I was; since my ‘leap of faith’ I had been spinning and not steady like the daredevils of ‘Aakash Ganga’. Anyway, with all my consciousness and situational awareness put together I looked down at the ripcord handle, grabbed it, and pulled with all my might. Lo and behold! The handle came out in my hand. I let out the choicest of invectives known to me on seeing this, as I thought the handle had broken. After a few excruciatingly long and agonising seconds, the parachute opened with a jerk. Once it stabilised, I looked up at the beautiful canopy, thanked the Almighty, cancelled all the invectives and looked around. I raised the visor for a better view, spotted the aircraft which was still in the air, and it crashed soon thereafter.

My descent must have lasted about 30 seconds, but it has humbled me for a lifetime. The landing was as imperfect as it could be. I had landed on my feet and fell down, the wind dragged me towards a bush and I ended up with my helmet coming to a stop inside the bush. After my so-called landing, I got up, brushed myself and collected the parachute. Soon a villager came on a cycle. I saw my map and asked the way to the nearby village. I put my parachute on his cycle and started going towards the village in order to give call or hitch a ride to the Academy.

It then occurred to me that first I should go to the aircraft and see its condition. So, we walked to the crash site which was a km away. It was not a pleasant sight, and not being part of it, gave me immense relief. Fortunately, no one was hurt on the ground as it had fallen in an open field. While I was collecting souvenirs (some instruments that had scattered around) I heard a helicopter landing nearby. Soon a doctor came and asked me to get inside. I obliged him and got my first helicopter ride, albeit lying down.

Once we landed in the Academy I pleaded with them to let me go as I was to fly another sortie and I had to play an inter-house hockey match in the evening. But, as you all are aware, the doctors do not listen to healthy people. Unwillingly, I was taken to the Military Hospital (MH). The DMO was disappointed that there was not a scratch on me. So there I was three sorties away from my FT, missing my hockey match, ruining the chance for my second sortie that day; sitting in MH and twiddling my thumbs. It must be the Stockholm syndrome or something, I was a bit confused. Slowly the realisation dawned on me and the gravity of the situation hit me quite hard. I was out of the hospital in a week’s time and after a dual check got back to flying to complete the semester with flying colours. Let me now analyse the ‘whys’ and ‘hows’ of the case for posterity. The reason for the mishap was dislodgement of a screw. So it was as simple as that.

Read about the last incident involving pilots baling out from a HPT-32 https://kaypius.com/2020/11/15/bail-out-bail-out-walking-the-wing-on-hpt32/