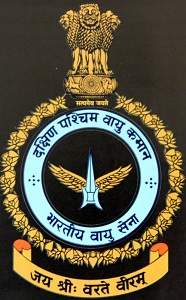 SWAC was converted from the No.1 Ops Group of WAC which was then located at Jodhpur. In May 1998, it moved its HQ to Gandhinagar. It controls air operations in the south western air sector, which includes most of Rajasthan, and south through Gujarat to Saurashtra, and Kutch to Pune. Because SWAC has no sensitive adjacent areas, its task has been largely air defence, however, it is now reported to have a strike mission profile. South Western Air Command features permanent airbases at Bhuj, Jaisalmer, Nalia, Jamnagar, Jodhpur, Barmer and Poona with forward airbases at Ahmedabad, Nal, Suratgarh and Uttarlai. The SWAC features air defence squadrons consisting of the MiG-21, MiG-29 and Su-30. The ground attack squadrons consist of the MiG-21 and the MiG-23. SWAC also has a maritime attack squadron, which consists of the Jaguar IM.