Comments: INS Sagardhwani is a Marine Acoustic Research Ship (MARS) launched in May 1991. The hull and machinery are very similar to the Sandhayak Class survey vessels, but there are marked superstructure differences with the bridge positioned amidships and a helicopter platform forward. The vessel has been configured as a research vessel for the Naval Physical and Oceanographic Laboratory, Kochi. The vessel is also based there. Aft there are two large cranes and a gantry for deploying and recovering research equipment.

There are a total of eight labs to permit conducting acoustic, geological, meteorological, chemical and physical oceanography. Most of the laboratories are acoustically isolated from the ship's structure. Among the first vessels in the Indian Navy with accommodations for female personnel. Carries 116 tons fresh water. The vessel is painted white except for the lift equipment and two rescue boats which are painted in orange. The vessel was employed in advanced torpedo trials and missile range support.

Comments: Acquired on lease with an option for purchase, which was taken up in March 1995, and the vessel was formerly re-commissioned on 15 September 1995. The vessel was built for offshore support operations but has been modified for naval requirements. Two DSRVs (Deep Submergence Rescue Vehicle), capable of taking 12 men to 300 meters, are carried together with two six-man recompression chambers and one three-man bell. A Kongsberg ADP-503 Mk.II dynamic positioning system is fitted. The vessel is used for submarine SAR (Search & Rescue).

Please scroll to the bottom to view images of INS Viraat

Structure: The vessel has been fitted with a 12º ski jump to operate the Sea Harrier, a reinforced flight deck, 1.2 inches of armour over magazines and machinery spaces. The magazine capacity includes 80+ lightweight torpedoes. The vessel retains commando transport capability, for around 750 troops and carries four LCVP landing craft aft.

Weapons: The Israeli Barak SAM system has been fitted, with fire control provided by an EL/M-2221 STGR radar. Two 40mm Bofors guns are used for air defense and were accompanied by a pair of 30mm AK-230 gatling guns (for protection against anti-ship missiles) till the latter was replaced by the Barak system. Fire control for the Bofors and AK-230 guns, which were installed in 1996, were provided by a pair of Plessey Type 904 radars at I/J-band frequency. One of these radars has since been replaced with the EL/M-2221 STGR radar.

Comments: INS Viraat was originally commissioned in the Royal Navy as HMS Hermes on 18 November 1959, as the last of the Centaur Class aircraft carriers. She served as the flagship of the Royal Navy's taskforce in the 1982 Falklands conflict. She served with the Royal Navy until 12 April 1984 and was then stricken from active duty in 1985. On 24 April 1986, the Indian Navy purchased the vessel and gave it an extensive refit at the Davenport Dockyard, which gave it a life-extension refit of 10 years. This refit included new fire control equipment, navigation radars and deck landing aids. Boilers were converted to take distillate fuel and the ship was given improved NBC protection. The engine room was flooded in September 1993, which put the vessel out of service for several months. By 1995, the vessel was back in service and had a new search radar.

INS Viraat completed another life-extension refit  beginning in July 1999 and ending in April 2001, which is expected to extend her serviceability till 2010. This refit included upgrading propulsion systems, a package of sensors to sound emergency alerts, a modern communication system, a long-range surveillance radar, new weapon systems, new hangar fire curtains, a revamped lift system to reduce reaction time in the event of an attack and a new flood alarm system. The vessel underwent sea trials in December 2000 and finally returned to service in early June 2001 after nearly two years in refit. The vessel also took part in the International Fleet Review in Mumbai on 17 February 2001. The vessel had to be towed back to dry dock for another refit in mid-2003 and returned to service only in November 2004, during which the vessel was fitted with the Barak SAM.

The Press Trust of India and The Telegraph reported that INS Viraat is scheduled to go for a one year refurbishment to extend its life. Quoting Vice Admiral Jagjit Singh Bedi, the Flag Officer Commanding-in-Chief of the Western Naval Command, "Virat has life in it and we will be carrying out a year-long refit starting early next year so that the ship is healthy till Gorshkov comes. It's machinery will be strengthened. It will be given a normal refit to last till Admiral Gorshkov arrives by the end of 2009 or early 2010."  Vice Admiral Bedi did indicate that no new military hardware, except a new air surveillance radar, will be installed aboard INS Viraat.

By mid August 2009, Viraat was floated in the dry docks at CSL upon completion of her latest life extension refit. She is expected to rejoin the Fleet in Sep 2009 and serve until 2015. 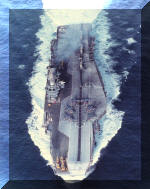 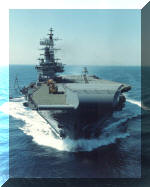