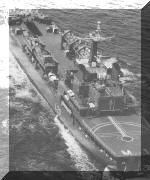 Helicopters: One Sea King Mk.42C, has a platform for two.

Comments: Based on the Sir Lancelot design. Built at Hindustan SY but fitted at the Garden Reach DY. INS Magar was refitted in 1995. Both vessels based at Vizag. Carries four LCVPs (Landing Craft Vehicle Personnel) on davits and features a bow door. Can beach on gradients 1 in 40 or more. INS Magar suffered an accidental fire which took the lives of three sailors and six others received burn injuries. The accident occurred about 40 nautical miles off the coast of Visakhapatnam, in the Bay of Bengal, at about 1700 hours on 22 February 2006. The injured personnel were evacuated by a Sea King helicopter and were admitted at the naval hospital at Visakhapatnam. The mishap occurred when the ship was engaged in dumping life-expired ammunition. Preliminary reports indicate that one of the boxes, containing life-expired powder charge, caught fire towards the end of dumping operation which resulted in the unfortunate incident. The was no serious damage to the vessel.

Note: INS Prahar K98 suffered a collision with the M V Rajiv Gandhi, a container carrier of the Shipping Corporation of India, 35 km off the coast of Goa at 9:45 p.m. on 22 April 2006. The damage to the merchant carrier was nominal, however the damage to INS Prahar led to the vessel being sunk. There was no loss of life and all personnel were safely rescued. The captain of the vessel - Lieutenant Commander Yogesh Tripathi - was dismissed from service in September 2006, after a court martial was conducted in which he confessed to committing navigational error. INS Prahar was commissioned into the Indian Navy on 01 March 1997 at Goa Shipyard Limited.

Structure: Indian units were built up from plating and CKD (Completely Knocked Down) kits supplied by the Russians. Very sturdily built and surprisingly roomy, for a Russian design.

Complement: Design complement is 41 sailors (including 5 officers).
INS Prabal and INS Pralaya have a complement of 69 - 70 sailors plus 7 officers.

Comments: Veer Class corvettes form the 22 Missile Vessel Squadron, at Mumbai. The hull is made of special, lightweight, MS and aluminium alloy sheets. INS Nirghat is the successor to the illustrious Osa-I Class fast attack missile boat which rained missiles on Karachi. The new vessel has preserved the red booster covers of the original P-15M AShMs that were lobbed at Karachi in December 1971.

An order for four modified Veer Class corvettes was placed in April 1997. This four-unit order was later drawn down to two units: one at Mazagon Dock Ltd, Mumbai and the other at Goa Shipyard Ltd. INS Prabal and INS Pralaya are a further modification of the Project 12418 design and may be referred to as the Mod 1241RE in Indian Navy service. One may also hear the name Molniya for these vessels, as it is the generic Russian name for the 1241 series of raketny kater (missile cutter) boats.

INS Prabal and INS Pralaya are quite different, in equipment, armament and appearance from their sister ships. Modified with Russian input, the weapons & sensor fit is similar to that of the Project 25A Class corvette, INS Kirch. Radars include a MR 352 Positiv-E radar, a Garpun Bal E and a BEL Lynx gunfire control radar. Armament comprises sixteen 3M-24E AShMs, the BHEL-assembled OTO 76mm Super Rapid Gun Mount (SRGM) along with two AK-630M CIWS gun mounts. The Lynx fire control system controls the twin AK-630M mounts and the 76mm OTO Melara gun. The radar has the following functions: a) Detection of surface and air targets, changeover to automatic tracking mode for selected targets and establishing it's coordinates and movement parameters; b) Working out data for firing, taking into account the target manoeuvring movement, movement of boat & ballistic correction. The EW suite appears incomplete - the characteristic radome of the Ajanta system is missing.

Structurally, these vessels also have an additional deeper deck, an extended operations room, and improved habitability. These changes have resulted in an added displacement of approximately 50 tons. Said to have a 65% indigenous content. INS Pralaya has a locally-built steering gear, propulsion shafts, air compressors, a reverse osmosis (distillation) plant, minor pumps, main switch boards, distribution board for power distribution, some valves/fittings, electrical fittings, etc. INS Pralaya is estimated to cost approximately Rs.350 crores. More of this class are planned though exact numbers are unknown presently. In 1990, MDL cancelled a study to equip the Indian-built units with a General Electric LM2500 gas turbines and two MTU diesels due to technical difficulties.

Comments: These vessels have similar hulls to the depleted SDB Mk.2 Class but with much smaller engines. The vessels are based at Kochi and Chennai. Like her sister ships, the Makar was initially inducted as a survey vessel and she did numerous surveys for the Indian Navy and the Hydrographic Department of India till 1993. Following the Indian Navy's decision to increase its presence in the Palk Bay, following LTTE activities off Tamil Nadu coast, the role of Makar was changed from survey to local defence and its base port shifted from Kochi to Chennai. Under the changed role, the ship was deployed for the first time in the Palk Bay on 02 January 1994 and thereafter she was involved in innumerable exercises and operations. As per an article in The Hindu, the Makar was decommissioned on 04 April 2005 at Chennai.

As per an article in The Hindu, the Mithun was decommissioned from the Indian Navy on 31 March 2007 at Chennai. In her 23 years of service to the Indian Navy, the vessel clocked 111,442 hours covering 72,390 nautical miles. The Mithun was originally designed for carrying out survey activities and was initially based at Kochi. From October 1993, she became a patrol vessel and its base was shifted to Chennai. Since then, it had been continuously deployed at Palk Bay and adjoining areas. She contributed immensely to safeguarding the country's territorial waters in the region. She also took part in the tsunami relief operations in December 2004 and was deployed off the coastal towns of Kalpakkam and Mahabalipuram, both south of Chennai.

Comments: These vessels were built at Garden Reach DY, Kolkata and Mazagon DY, Goa and completed by 1984-86.

The Indian Navy on Monday, 07 Sep2009 de-commissioned two of its Seaward Defence Boats, T-59 and T-60, 24 years after they started sailing the seas. The decommissioning took place at the Madras Port Trust in the presence of commodore Rajiv Girotra, VSM, naval officer-in-charge (Tamil Nadu & Puducherry), who received the guard of honour. The paying off pennant was hoisted on Sunday to mark the beginning of the decommissioning ceremony. The naval ensign and the national flag were lowered and folded at sunset. The last post was then played and the paying off pennant lowered. Measuring 37.5 metres in length with speeds of 25 knots and manned by sailors and officers, the ships were fitted with two Bofors 40/60 and one heavy machine gun. Under the guidance of naval officer-in-charge (Tamil Nadu & Puducherry), the ships played an appreciable role to augment the coastal security that included measures to sensitise fishing communities and enforce security along international maritime border line and off shore platforms.  During their long years of service, SDB-59 and SDB T-60 had been mostly based in Chennai and participated in several crucial deployments like Op Pawan and Op Tasha, a naval release said.  While the SDB-59 had clocked 1,840 days at sea, the SDB-60 has clocked over 1,900 days at sea, the release said. The ships will be replaced by two new indigenously-designed Water Jet Propelled Fast Attack Craft (WJFAC) which will commissioned on November 10 at Garden Reach Shipbuilders and Engineers, Kolkata.