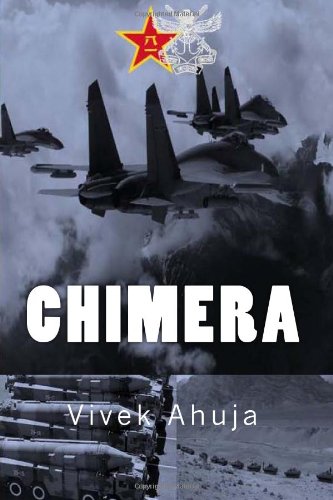 First-time novelist Vivek Ahuja's book, Chimera, had a start as unconventional as the subject it explores. It began, not as a hopeful novelist's solitary effort at penning a masterpiece, but a military enthusiast's attempts to write a fictitious scenario involving an India-China conflict on an internet forum. I watched with great interest as the story grew from that humble attempt, with dozens of enthusiastic readers offering critiques, advice, brickbats, and wishlists to the author as each chapter was slowly put up. When I found out that the series of posts were going to be collated, edited, polished, and published in the form of a novel, I was keen on laying my hands on a copy as soon as it came out.

One of the first things you notice as you begin reading Chimera is that it is sorely in need of an editor. Typos abound, grammatical errors make themselves felt from time to time, the flow of events could have been better, and conversations between characters feel laboured at times. Doing the extensive research that a book like Chimera requires and writing the novel itself is a very tough undertaking as it is, editing and publishing is only bound to distract the author from where his efforts ought to lie. One can't help but imagine how a good, professional editor would have transformed Chimera from a book directed towards military techno-geeks into a cracking read that reached out to a much wider audience.

Another flaw with the book is the treatment of the events leading up to the conflict between India and China. The basic premise is that minor incidents between two militaries facing each other eyeball to eyeball, compounded by mistakes by aggressive local commanders escalate to the point where one side lashes out and precipitates a war that neither wants. That is a fair, and given the recent tensions between the two militaries, perfectly valid build-up to the conflict. And yet, the transition from a precarious peace punctuated by local clashes to total war is abrupt to the point of being inexplicable. It robs the storyline of what could have been the perfect means to fully explore the motivations and behaviour of the top leadership on either side. Indeed, the reader is left with the feeling that Ahuja got bored halfway through writing the build-up and decided to get on with the war sooner rather than later. That, more than anything else, does great injustice to a book as voluminous and richly detailed as Chimera.

However, once you see past these imperfections and delve deeper into the novel, its sheer brilliance comes to the fore very quickly. It is evident that Ahuja's knowledge of the geography of the theater -- from the mountains of Ladakh and the plains of Tibet to the heavily forested hills of Arunachal Pradesh -- is exhaustive, as is his understanding of the make-up of the opposing armed forces, the military hardware employed by both sides, the operational considerations of war in the mountains, and the tactics employed by the people actually doing the fighting. And when the sheer depth of this knowledge is translated to a vivid portrait of war, the outcome is simply stunning. This is evident from Ahuja's narrative of the Chinese strategy of executing a hook-like manoeuver through Bhutan to bypass and surround Indian defences in Tawang, of the systematic dismemberment and destruction of the Chinese air defence network, and the ultimate denouement of a war of this scale -- the unleashing of nuclear weapons. The action itself is no less thrilling; I would be lying if I said I didn't do a little fist pump every time an Indian Su-30 smacked down a Chinese J-10, or held my breath as an Indian patrol walked into an ambush that was going to end very badly.

What I really like about Chimera is that Ahuja, for the most part, eschews the temptation to present the conflict as the classic battle between the good and evil. Instead, he approaches the subject as a relatively unbiased observer would -- portraying India and China as two countries with differing strategic goals whose actions put them at loggerheads with each other. The depiction of the characters too is in line with this perspective. Competent and incompetent leaders abound on both sides, as do bold and cautious military commanders, and people simply caught up in the flow of events. All this goes a long way towards providing a very realistic setting for the war that inevitably breaks out.

The rich detail, the refusal to stick to a formulaic plotline, and the depth in which the subject is explored makes Chimera a must-read, not just for military techno-geeks, but anyone with a passing interest in the India-China relationship. Military fiction in the Indian context is about as rare as book genres get, so when a book of this sort is published, it is time to rejoice!

Disclaimer: The author of the novel in question plied this reviewer with much alcohol and tandoori chicken in the hope of extracting a positive outcome. It is left to the reader to determine whether that move met with success."

Links for Indian buyers of the paperback version: http://pothi.com/pothi/book/vivek-ahuja-chimera

Links to the Kindle version: http://www.amazon.com/Chimera-Vivek-Ahuja-ebook/dp/B00FPFO8N0/