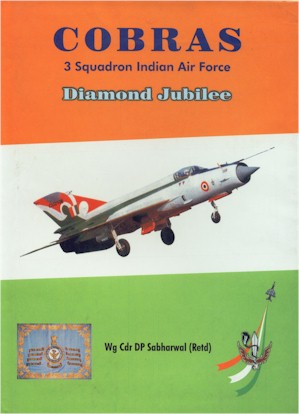 Recently I was lucky enough to procure a copy of the book 'COBRAS - 3 Squadron Indian Air Force -Diamond Jubilee' , written by Wg Cdr D P Sabharwal and published by No.3 Squadron, AF. I use the word 'lucky', because this book is not easily available on the open market, though marked for sale at a cost of Rs 350/- and said to be on sale from the Dir of Education, Air HQ, its pretty difficult to lay one's hands on a copy.

The book is the Diamond Jubilee History of No.3 Squadron. A commendable effort, because it makes No.3 the only second flying unit of the Indian Air Force to bringout a comprehensive history from its formation days till date. The first , ofcourse are the Battle Axes, who published their 50 Years Golden Jubilee history in 1992. (Incidentally, both the COBRAs as well as BATTLEAXEs has similar style of writing in most places, the result of depending on the Squadron diaries - no doubt!)

The editor/author -- Wg Cdr Sabharwal, mentions that the first time the Squadron wanted to publish the history was way back in 1961, when the then CO Sqn Ldr Taneja got the first draft of the first 20 years written. The author acknowledges that the first draft is used 'as is' for the initial history of the book. Apparently the requisite permissions took quite sometime and it was decided only in 2002 to get the book out. Consequently this slim book was published by the COBRAs themselves in record time.

As is normal with any publications, there are both appreciations as well as quibbles on such an effort.

- This book provides the only source for enthusiasts with information on No.3 Squadron, which is relatively one of the more unknown squadrons of the Indian Air Force.
- As one of the only two available squadron histories, this is a 'must have'
- The Squadron put in considerable effort to bring out the book in time,
- The World War two chapters are quite readable and detailed.
- For the hardcore history enthusiast - There is plenty of 'Raw' Data to read .

- The book is pretty thin on material. The chronological history barely covers
75 pages of text - with the rest 50 pages consisting of appendices on COs, Gallantry Awards, Roll of Honour, Squadron Songs, Visitor Book entries, Accidents, Messages of Congratulations etc.
- The photographs are too few. Compared to 60+ pages of photos in the Battle axes book (Which was roughly twice the size with about 150 pages of text), COBRAS has only 12 pages of photographs - out of which not more than 2-3 pages are worth putting in there.
- Coverage of the Operations and Conflicts is quite disappointing. No 3 was in the thick of the fighting in the 1965 Operations. These are covered in about 7 pages - barely sufficient , but not in enough detail. Most of the narration is in the 'Squadron Diary' style. Apart from the one page description of Sep 6, all the remaining days are explained away in a paragraph or two each, which does not do any justice to the amount of flying they put in. We barely get to know who is who in the squadron.
- The 1971 Operations fare even worse. It borrows heavily from ACM P C Lal's memoirs on Mystere ops from Sirsa. Remove that part (which is about half a page) and this book has just about another half a page on the 1971 ops -- which is a complete let down. I am sure, with two VrCs from the ops, and 76 hours of op flying in an active sector like Fazilka, Suleimanke, there must be a lot more to write about there than half a page.

To be fair, the Author mentions that there were time and clearance constraints in bringing out the book. The objective was to publish the history in time - and worry about additions and improvements later. This is again re-emphasized by the Commodore Commandant in his introduction -- he mentions that the book is a compilation of the Diaries - and it misses the personal touch of its members and lacks first hand accounts. It is made clear to us that there are plans to bring out a second edition in the future and he invites former members of the squadron to contribute their personal experiences and accounts , which are to be sent to the Squadron Adjutant for this purpose.

All in all - a commendable effort by those involved in bringing out the book, the credit going to the current personnel of the squadron and the Commodore Commandant, But I would definitely want the second edition to come out - with more details and photos. Now the only problem would be as to how to get a copy of that!