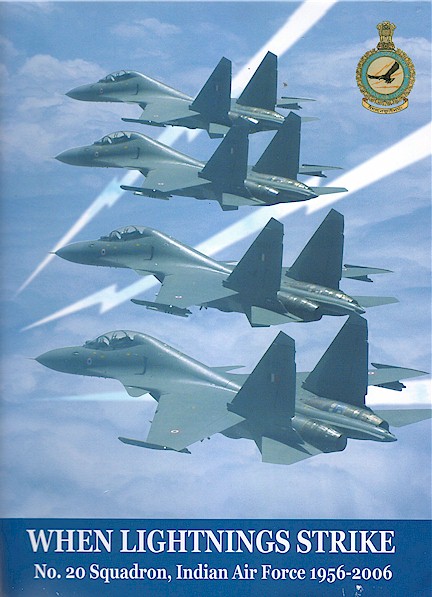 No.20 Squadron recently released their Squadron History in the form of a book "When Lightning Strikes - No.20 Squadron, Indian Air Force 1956-2006 " . The book was released at the recent Golden Jubilee celebrations at Pune. The following is a quick review of the book.

The book is A4 Size - and is 88 pages - printed on glossy paper in multi color format. The book is written by Wg Cdr (Retd) AS Limaye, a former Commanding Officer of the Lightnings from the early 90s and has been published by The Society of Aerospace Studies (Mr. Pushpindar Singh's organisation that also publishes VAYU). There is no price printed on the book nor an ISBN, so I have no idea how much it costs or how to procure it - I got my copy thru Kapil Chandni who covered the Lightnings Golden Jubilee for BR at Pune.

This history is only the third in the list of Squadron Histories that have been published till date (No.7 being the first, No.3 being the second). Approx 60 pages are devoted to the Squadron's history from raising till the current era. Another 28 pages reproduce the very detailed War Diary of the Squadron from the 71 War that was previously published privately by AVM Parker with the help of Wg Cdr Farokh Mehta of Wings Grafiks.

There are several rare photographs of the current day Sukhois in the book - including one image of the aircraft carrying Air to Air Missiles, shots of the interiors of the cockpit and an extremely rare photo (albiet small in size) of a USAF F-16 caught in the HUD video of the Sukhoi - from the recent Cope India exercises.

Though the quality of the printing and binding is top class, the content of the book is really not upto the detailed standards that the BattleAxes or the Cobras Histories have achieved. perhaps unlike the first two which start from 1941 onwards, this history starts from 1956 and has relatively less material to work with. I really cant put my finger on whats missing, but I found the history sparse. And some of the stalwarts of No.20 Squadron might be disappointed in not finding their names in it.

There is however some good history of the Squadron from its Thunderbolts era - and the 1990s, some of which was relatively unknown.

Overall, I would say this is a welcome addition to any IAF historian's library. If not for nothing, the wardiary of the squadron from 71 war in itself makes the acquisition worth it!