For King and Another Country

For King and Another Country 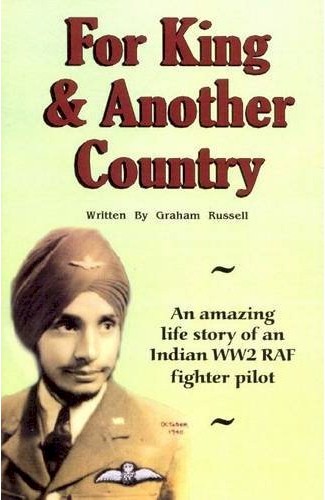 Fighter Pilot Biographies are innumerable.. there are thousands of books out there dealing with the lives of World War Two era fliers. But try to locate anything specific to World War 2 pilots from India, and you will be hard pressed to locate one. In that context the availability of the biography of Squadron Leader Mahinder Singh Pujji DFC was welcome news. Sqn Ldr Pujji, till recently was one of the last remaining pilots still living from that era. Only 21 Indians ever received the DFC in the Second World War - and Pujji was the rare survivor among them. He had been in the news in recent years, highlighting the contributions of the Indian volunteers to the cause of the Allies. Thus a book that was to be his biography was a much awaited one. Sadly even as I was awaiting reciept of the book, news came in that Sqn Ldr Pujji had passed away in UK at the age of 92. The book arrived just a day after.

The title page of the book gives an idea on what the book is about - Below the main title "For King and Another Country : An amazing story of an Indian WW2 RAF Fighter Pilot" is another sub title - "Recollections of Squadron Leader Mahinder Singh Pujji as told to Graham Russell". This book is just that - Recollections of a ninety year old WW2 Veteran. Unfortunately as many a historian will note - such recollections while welcome, are often cloudy, inaccurate and can muddle the waters if not accompanied with painstaking research work.

The Author Graham Russell writes in his introduction "A detailed inventory of the Second World War Operations he took part in will not be found in this book - that type belongs to a Pilots Logbook..." . There you have it, it just so happens that was exactly the information I was looking for in the book ... I suspect if this statement had been printed openly in any of the promotional material, there would have been a tad fewer sales than normal. Granted perhaps there is a market among schools as text book, but definitely the hardcore WW2 Aviation reader will surely be disappointed if he had any higher expectations.

Whats inside the book? Well for starters - its about 182 Pages in total. Remove the 10 pages of title, information and author's preface, and the 88 pages of copious illustrations, it leaves roughly 84 pages of text of Pujji's recollections. These 84 pages are equally split between his career before the end of the Second World War, and his career details after that. These 84 pages of text do make a significant contribution - in recording and immortalizing Pujji's words and memories. Certainly not much has been reported about Pujji's aviation career after WW2 and the book does make its contribution in that regard.

But all this doesn't shake off the disappointment of not learning about Pujji's war time operations in detail. While there are several anecdotes directly from Pujji, stories and memories of some of the sorties. The lack of dates and timeline is a distraction. It would have been good if the author had researched Pujjis' WW2 career and rightly annotated the information in sections. By not choosing to do so, the book introduces many inaccurate statements that may set the historian astray.

Among the errors that caught this reviewers eye - "Pujji applied for the RAF and was selected in it" (Pujji volunteered for the IAF - there are several key differences between an IAF commission and an RAF commission). "12 of Pujjis colleagues were killed in UK" (About 7 were killed - 1 died later in Australia). "Pujji Joined 6 Squadron under Sharp" (It was clear that Pujji was confusing his 4 Squadron tenure under Sqn Ldr G S Sharp RNZAF with that of his earlier 6 Squadron tenure under Sqn Ldr Mehar Singh). "CO Sharp went missing for months, Pujji took over command" (The ORBs of 4 Squadron indicated that Sharp went missing only for a week before news was telegraphed to the Squadron that He had been recovered, albeit slightly bruised. Moreover it was Flt Lt D M Finn and later P A Kennedy who assumed command of the Squadron). Errors like this distract the reader away from the pages dealing with Second World War days.

Ofcourse I do understand the author's dilemma - how would you correct your subject's recollections knowing they are in error ? But in this case Graham Russell probably didn't know they were wrong in the first place.

The saving grace in the book - are the details of Pujjis life after the war.  This part has never been explored in depth before. The photos that accompany the book could have been cut down in place of better researched text - but since the meat on the book is lacking, the additional photographs are a welcome addition.

In final summary, though this may be a good book for the novice reader who wants to learn about the Indian Contribution to the Second World War. It is a major disappointment for the discerning WW2 Aviation Researcher. In the reviewers opinion, this book rates two stars at best.