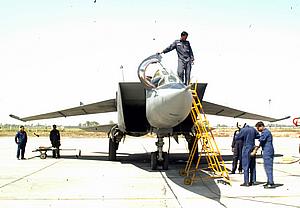 The MiG-25 was inducted into IAF service on 17 Aug 81 at Bareilly to fullfil the need of a strategic reconnaissance aircraft. On that day No.102 Squadron under the command of Wg Cdr Apram Jeet Singh VrC  was formed with five MiG-25Rs and two MiG-25Us. The first sortie took place on 25 Aug 81, when a two seater was flown by the CO A J Singh with the then Chief of Air Staff, Air Chief Marshal Idris Latif as his second pilot.

During the initial days, one aircraft was wrecked while being air tested by a Russian Pilot. the aircraft was replaced with a new one in due course at no additional cost. Another aircraft was lost in 1985 at Jodhpur when an aircraft crashed on approach. The pilot perished in the accident.

The Squadron operated under the functional control of Air HQ directly. Only later in its career did the control shift to Central Air Command. Bareilly had been the parent base of the aircraft throughout its career. The aircraft did undertake sorties from other airbases as well in course of its missions.

The first operational mission was flown in October 87.  It was displayed publicly at Tilpat Air Power Demo in March 89. In October 1990, Peter Steinmann took several air to air photographs of the aircraft that attained world exposure. On 24 Oct 95, the then CO Gp Capt Sumit Mukerji and Wg Cdr Y S Babu flew a two-seater to photograph the eclipse over India.

The aircraft was used during the Kargil conflict, Wg Cdr P J Thakur of the Squadron was mentioned in dispatches.

No.102 Squadron was numberplated in 2003 and the aircraft were used to form  "A" flight of No.35 Squadron "The Rapiers" which had given up its ELINT Canberras by that time.

Over the years atleast three MiG-25s were lost on routine sorties. During its entire tenure with the IAF, only 42 IAF pilots were ever qualified to fly this fighter.

The aircraft's original calendar life was 15 years. In 1995, a life extension programme pushed the MiG-25s for another ten years. In 2001, another programme propelled the jets until 2005. The final extension was made in 2005. Finally, the IAF decided the machines wouldn’t be pushed any more.

The aircraft was finally phased out on 1st May 2006. At that time three single seaters (KP351, KP354 and KP355) and the two trainers (DS361, DS362) were still operational. An addtional fourth single seater aircraft (KP3106) was also extant but had been withdrawn from use for years.

All the six airframes that were remaining were sent out to be preserved. One each in Barielly, Kalaikunda, Dundigal, Palam, Khadakvasla and Jodhpur.

Only 42 pilots were ever qualified to fly the MiG-25. The following is a partial list of the MiG-25 qualified pilots