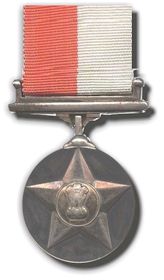 The Maha Vir Chakra is the second highest wartime gallantry award. The Award is less in precedence only to the Param Vir Chakra. Only nineteen IAF personnel ever received the Maha Vir Chakra in four wars and numerous actions since 1947. Two Canberra pilots Wg Cdr Jag Mohan Nath and late Wg Cdr Padmanabha Gautham , have distinction of receiving the bar to the Maha Vir Chakra, thus making 21 such awards to the Indian Air Force.

The only instance of the MVC being awarded posthumously was in 1988, when Sqn Ldr A B Devayya was awarded for his feat in a war 23 years earlier.

Three MVCs were given to pilots who were already decorated with another award, Air Cmde Mehar Singh had the DSO and Wg Cdr M M Engineer had the DFC when both of them received the award during the 1948 Kashmir Conflict. Gp Capt Chandan Singh was the recipient of the Vir Chakra in 1962.

The Highest number of MVCs in a single conflict was for the 1971 War in which eleven MVCs were given to the Air Force.

1988 Retrospective Award for 1965 Conflict
Sqn Ldr A B Devayya