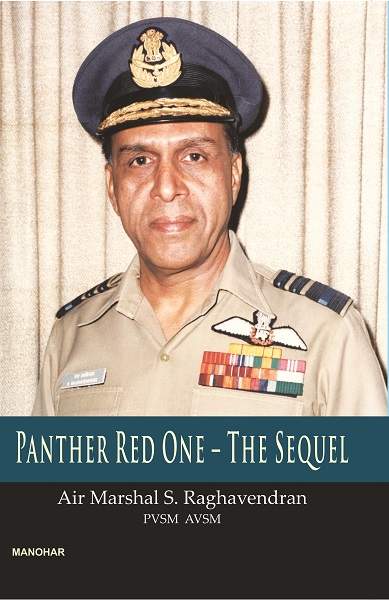 The much awaited sequel to the delightful "Panther Red One: Memoirs of a Fighter Pilot". The author Air Marshal S Raghavendran is the retired Vice Chief of the Indian Air Force. In this sequel, he chronicles his career where the first book left off. Covering the staff and operational command appointments, the Air Marshal holds no punches in describing the disconnect between the government bureaucracy and the Defence procurement and planning wings.

In 2005, Air Marshal S Raghavendran started contributing his articles for this website. Over the next few years, the articles he wrote formed the basis for the first volume of his autobiography "Panther Red One : Memoirs of a Fighter Pilot".  The book, published by Knowledge World of New Delhi covered his career in the Indian Air Force starting from his training days in 1948, upto his stint as a Station Commander during the 1971 war.  The book was well received ( Avg 4.5 stars on Amazon), and the sequel to it was eagerly awaited.  The second volume, slated to cover his career from Air Commodore till his retirement as Vice Chief of Air Staff was to be published soon after, but ran into delays.  The original publisher - Knowledge World apparently sufferred second thoughts about the controversy it might generate and decided to pass. The manuscript was picked up by Manohar Publishers of New Delhi. Multiple rounds of edits later, "Panther Red One : The Sequel" was published in April 2017.

On the occasion of the book being made available in the US, Air Marshal Raghavendran was kind enough to share some of his thoughts about the book and answer some questions.  These are presented in the embedded video below (duration 6 minutes)