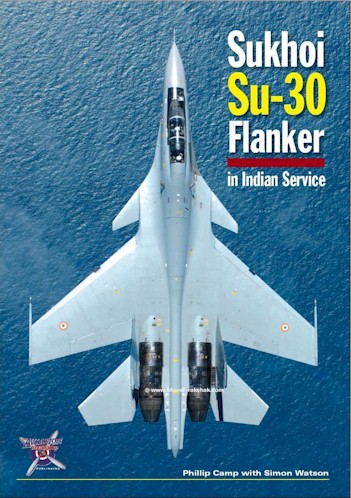 The Sukhoi-30 MKI is without doubt one of the finest multi-role aircraft in the world today. The melting pot of a robust Russian airframe combined with state of art western avionics and locally developed computers has given the Indian Air Force a quantum leap in offensive capability unrivalled in Asia.

Now, for the first time ever, renowned Aviation Writer Phil Camp and Photographer Simon Watson have documented this unique aircraft in a Collector's Edition of a book.

This book traces the development of the aircraft and describes the hurdles that have been crossed to get to the final product. After initial teething troubles, the Indian Air Force has found itself with a very capable Multi-role aircraft; possible the most capable outside the USA.

This is an excellent first book by aviation photographer Simon Watson with whom I am acquainted and co-authored by Phil Camp , Aviation Writer, IAF historian and an aviation Patch collecter. Both are well known in Indian Air Force and the Bharat Rakshak circles from their frequent visits to IAF bases and Aero India. The Photographs in the book are from a variety of sources USAF, RAF, IAF, some by names known to us eg Dave Willis (ex-Aerospace Publishing) and Jagan Pillarisetti, the webmaster of this site.

Simon ,well known to many of us folks , is also the owner of the renowned Aviation Book Shop now re-located in Tunbridge Wells. It is probably the best stocked aviation book shop on the planet and he has always been very generous in helping out Indian enthusiasts.

This was originally planned for release at Indradhanush II in RAF Waddington, as conveyed to me by the authors - however it inevitably got delayed.

The Book traces the development of the Su-30 K and MKI and in particular the service induction in the IAF. It covers the local production details ,Squadron induction and includes potted Squadron histories. It is an excellent photographic record spawning 96 pages. Meticulous detail and effort has gone to present the history in chronological order including rare brochures and pamphlets and all the Sukhoi IAF patches in existence.

There is a good writeup on the engine ,airframe , weapons , avionics and of interest are minor details like the service induction in 2007 of Gimbals giving additional antenna manoeuverability. As expected, classified information on radar characteristics etc not revealed else the authors would probably become persona non-grata at the IAF bases!

The differences between Su-30 K and MKI are articulated and of interest is the coverage of Exercise Indradhanush in RAF Waddington last year.

Where this book scores and is unique are the excellent photos of the Su-30 MKI including many air to air from exercises , the 25 odd pages of close-ups and walk around which will be a delight to all modelers and very informative , closeups of weapons and one page of around 30 squadron patches .

A highly detailed walk-around and under of all the main external parts are shown.

Even the inside covers are utilised to show the excellent colour profiles and there are excellent close-ups of weapons and another whole page of patches.

I would have liked to see a write-up on operational tactics ,Service maintainability of the MKI and training (if permissible and maybe not !!) and some pictures of live firing of R-73 or R-27 - however there are some unpublished pictures from their visits to Lohegaon AF , various exercises and some superb in-flight pictures with various contemporary AF including re-fueling with a Mirage 2000 H etc .Of interest to hardcore enthusiasts will be the close-ups of all the weapons
associated with the MKI - Bombs , Rockets , Cannon and all the various A2A, BVR , A2S missiles and photos showing the process of mounting the missiles on to the wing tip rails .

The book has the following chapters :

The printing and the photos on glossy paper with informative captions and a breathtaking cover (think there was a Typhoon flying alongside the original photo) are a delight.

I hope that the authors also bring out a similar work on the Mirage 2000 H in IAF service. In all a great work with excellent rare photos , close-ups and a first of its kind - highly recommended for IAF buffs.