21 seconds in time can fly fast without anyone noticing it, but as this supersonic jet pilot can testify, it can appear to be a lifetime - and a lot can happen in those short 21 seconds!

THUD...Bang...Bang....BANG, it sounded like the much dreaded engine surge we had been told about during the MCF and countless discussions in the squadron. The engine appeared to go rapidly from full thrust to zero thrust in quick succession as I was alternately pushed against the seat and then thrown forward against the straps. Then, as suddenly as it had started, things seemed to settle down and get back to normal. But in less than a blink of an eyelid I realized that the engine was winding down and the aircraft decelerating. There was a sickening change in the engine note, a corresponding counter-clockwise motion of all engine gauges and the T-10 panel started lighting up like it was Christmas. In next to no time, the cockpit became silent; it was quite unlike anything I had experienced before.

Basic training made the next few actions automatic. I instinctively pulled the nose upwards, but not too steeply, to get away from mother earth and noted that the IAS, which was about 850kmph at the time of the flame out, was already bleeding off. I reached out and flicked the relight switch to attempt a 'hot relight' (as per the standard emergency drills of the day) and gave a terse call, "Leopard-1, I've had a flame out!".

"Bhoji, try relighting." The voice belonged to the Boss, Wg Cdr Upkar Singh. The call reassured me, but at no stage was I under any illusion; it remained entirely my responsibility to try to control the situation and to bring the stricken Type-77 back in one piece.

But the engine had so far not responded. The aircraft had gone up to about 700-800m 'indicated' with the speed having washed off to about 550kmph. I knew that Adampur was about 12 o'clock just 5-6 km away, though it wasn't visible due to the dust haze; I willed myself to shove the nose down to prevent the speed going below the recommended glide speed of 450 kmph.

Time seemed to slow down, the entire day and parts of my recent life, flashed on a virtual HUD like a time-lapse video. It was a typical summer day on 07 Jul 71, and had started quite unexceptionally. There had been the usual 'blackout' the previous night, but thank God there had been none of the frequent 'general recalls', which had become so commonplace in Adampur, also known as Randhir's Air Force', in the months leading up to Dec 71. In the morning there had been the Met, ATC and Signals Briefing, followed by an aircraft recognition and 'emergency' session, nothing out of the ordinary there either. But for me it was a special day; I was going up for the final 4-ac Lead Check. The CO was the subsection leader, the No 2 & 4 were Vijay Sethi and Steve Lall respectively. The mission was a Low Level Nav followed by a pull up attack over Adampur, get away and RV, before rejoining circuit. Start up, taxy, take off from runway 31 and navigation had been near copybook, the amount of low flying we had done in the area around Adampur ensured that we knew practically every bend in every road.

As we left, Nawashahar, the selected IP, I gave a call "Leopard, switches", opened 98% and we accelerated in unison to 850 kmph. I now concentrated on the final part of the navigation so as to pick up the airfield and get the necessary offset for a right hand PUA and make TOT within a tolerance of 10 seconds. With my entire focus on navigation, making TOT and visually acquiring the target, I missed seeing my feathered nemesis dead ahead. Judging by the damage it caused, as seen after landing, it was a monster of a vulture; the air intake lip, normally perfect circular, had been flattened and folded rearwards from 5-7 O'clock and parts of the huge wings were still visible, spread out in front of the compressor first stage.

My CO's voice brought me back to the present situation. "Bhoji, did you get a relight?". "The relight switch isn't coming on", I yelled back. The wire used for locking it was too thick to be broken with ordinary force! Two, maybe three more efforts to break the locking wire – success!! "Relight switch on but no relight", I transmitted.

Even as I looked helplessly at the near dead RPM and JPT gauge readings, in my peripheral vision I saw No 2 overtaking me on my right. An irrelevant thought came to my mind : I must remember to debrief No 2 on poor position keeping!

Mentally back again in the cockpit I realised that soon I may have to eject. I put the map on the instrument coaming and I gave one more quick glance around the cockpit, much like a hotel guest might give a once-over to his comfortable room to check if anything has been unwittingly left behind. The look-around couldn't have taken more than a fraction of a second, but it was enough to trigger the thought that the throttle was still way forward, at about 93% position. I figured that since the RPM had decayed to wind-milling, it was no longer a 'hot' relight and I ought to bring the throttle to HP Off position.

The effect of bringing the throttle rearwards was magical, to say the least. As the throttle came to the idle, almost instantaneously the RPM and JPT needles started moving in the right direction and I could hear the engine note rising. I stopped myself just in time from pulling the throttle below the idle catch – and started breathing again.

"I HAVE A RELIGHT!" I almost shouted on RT. "Start easing up, Bhoji", my CO advised. 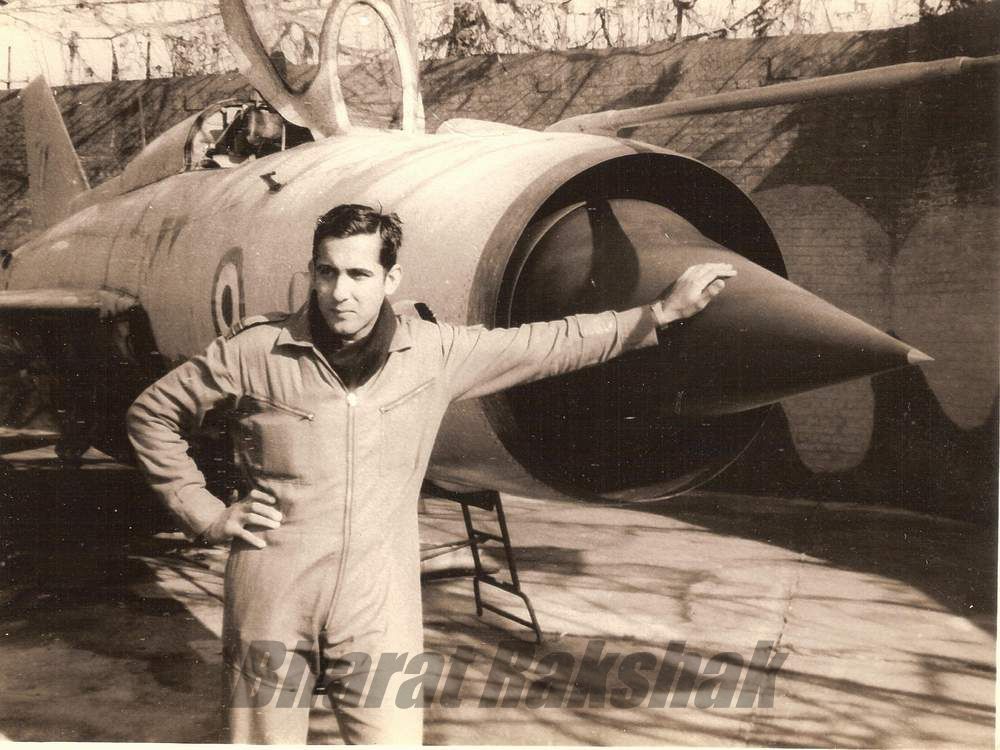 I waited till the RPM had stabilised for a second before gingerly moving the throttle forward. I remembered DS Brar's case a few years earlier, where he suffered 3 flame-outs and 3 relights in a single sortie (albeit at well above 10km height) because he tried to open throttle before the engine had attained idling RPM for that altitude and speed. He finally gave up and did a perfect dead stick landing, thanks to the regular practice force landings we carried out. Incidentally, I understand that that was the first ever recorded successful forced landing carried out by a Mach 2 fighter.

I held my patience and advanced the throttle ever so carefully. While under training at Hakimpet we were taught to be extremely careful with the Goblin engine of the Vampire, which was prone to rich cut if mishandled. That day I treated the R-11 with equal care. In my peripheral vision I could see the runway looming up 1 O'clock, just 1-2 km away, and the ground getting uncomfortably close. I nursed the nose up a bit but fought the urge to slam open throttle, and once again straightened my spine in case I had to eject (it hadn't dawned on me that by then the aircraft was well below the ejection minima for the Type-77, which was 110m AGL in level flight). But I was aware that the situation was not totally hopeless as the engine was responding positively and I gradually I was able to bring the nose to near level attitude. I was obviously VERY low as the ground was rushing by at a hectic pace!

An angel was definitely watching over my shoulder that day. The engine had revved up to 93-95% and the descent had bottomed out, almost scraping the tall sugarcane growth below. (The CO later told me I had gone down to about 20m AGL!)

The engine was making strange sounds and causing terrible vibrations, buffeting the whole airframe, but giving what I needed the most at that moment, life saving thrust. The stench of burning flesh in the cockpit was almost unbearable. I left the relight switch on....just in case.

I slowly gained height, initially 100m, then another hundred. I reached circuit altitude but kept climbing. By now I was south of the runway, ideally positioned for right hand circuit for runway 13. My good friend, Kailasam was the DATCO, a truly professional controller. He had silently monitored all the RT transmissions and made visual contact with my aircraft; anticipating my next move he had already switched the arrester barrier positions and alerted the crash rescue facilities.

He came up on RT, "Leopard 1, runway 13 on your right, ready for priority landing." I carried out what now is a pretty routine 'descending' circuit (no such SOP existed then), except that I lowered undercarriage only as I rolled out on finals and kept about 20kmph higher speeds all the way down. Not knowing what else had been damaged by the bird hit and the subsequent severe vibrations, I decided to use the chute after touch down, despite its then reputation of causing an uncontrollable swing, which sometimes was severe enough to take the aircraft off the runway!

But things worked out fine and the landing was uneventful. The hydraulics, pneumatics and everything else operated quite normally. With the kind of beating the aircraft had taken in the previous few minutes, I somehow expected more problems. I paid a silent tribute to Mikoyan and Gurevich for their sturdy design of the MiG-21, a truly remarkable fighter plane.

From the ATC tape recording the Court of Inquiry found that the time elapsed from the first call of "Flame out" to "Relight" was just 21 seconds. I couldn't believe it – to me it had taken an eternity for the engine to respond, and one hell of a lot of things had happened in that period. I guess we hadn't heard of 'Temporal Disorientation" in those days. The locking wire used on the relight switch was found to be of the wrong gauge. In fact the court expressed surprise that it had broken at all – an adrenaline rush sure gives extra wallop to the muscles.

This article was first published in the IAF's Aerospace Safety Magazine. Reproduced here with permission