Three Forced Landings in a Harvard

Three Forced Landings in a Harvard

Captain Karimuddin Ahmed Shah AUX30032 served in the Auxilliary Air Force for ten years form 1956-1966.  He narrates the details behind the force landing incidents he had to do during his career. All of them involved the Harvard Trainer. Flt Lt Shah was instructor with the 85th Pilot's Course in early Dec 1962. He was in "C" flight, Basic 2 Sqn at AFFC Jodhpur.

I took off on an Instructional sortie with my Pupil, Dandass (86th Course). turned left towards Salawas and our local flying area. At about 1300’ AGL I heard a loud noise followed by a few Clanging sounds. My Engine was breaking up. (The Master Connecting rod broke, followed by other Con. Rods)

D S Nagi in another aircraft – “Tower, I got him in sight. Trailing smoke.  Following him down”

Thank God the Tower did not bother thereafter.

Self – "Dandass, tighten your straps. We are force-landing”  He was monitoring all RT Con.

My heart was in my mouth and as the adrenalin kicked in my search for a field was disheartening as there were rocks in the fields on my left. I looked to the right and saw a ploughed field adjacent to a road with HT electric cables at the end. My only choice was to belly land in the beginning of the 100 yrd.field. Luckily my flaps worked and I cleared a cyclist ( I don’t think he knew what went over his head) on the road and touched in the beginning of the field. The aircraft stopped in a very short distance. As I sat with relief and calm my pupil was beside me checking if I was alright. We stepped out together beside the a/c and waved to the a/c circling us overhead. Dan Sing would have informed the Tower that we are safe.

The villagers gathered around as we waited. My throat was parched and I was very thirsty. They took us to a well where the water was covered with green moss. They parted the moss and got us the water which was the sweetest water I ever drank. In less than 15 mts. The Commandant, Air Com Victor Srihari, Chief Instructor, Groupy CGI Phillips (those are his Innitials) and a few other cars reached us.. After many congrats we headed for base. Even though I was feeling good, I had to go to our doctor who checked to see if I would suffer from Shock.

SHOCK ? It wasn’t I who suffered it. It was my Wife. After returning home and showering we went to our open -air Movie theatre. In the parking lot my friend Farooque Kapadia approached us and congratulated me. My wife was surprised and inquired what the congrats were for. He then spilled the beans about the happenings. During the Movie, my 3 month pregnant wife was not feeling well and asked to go home. She was the one who felt the SHOCK and lost the baby.

Even though it was a belly landing, we were safe, the aircraft was flying again within a week after the engine and flaps were replaced. 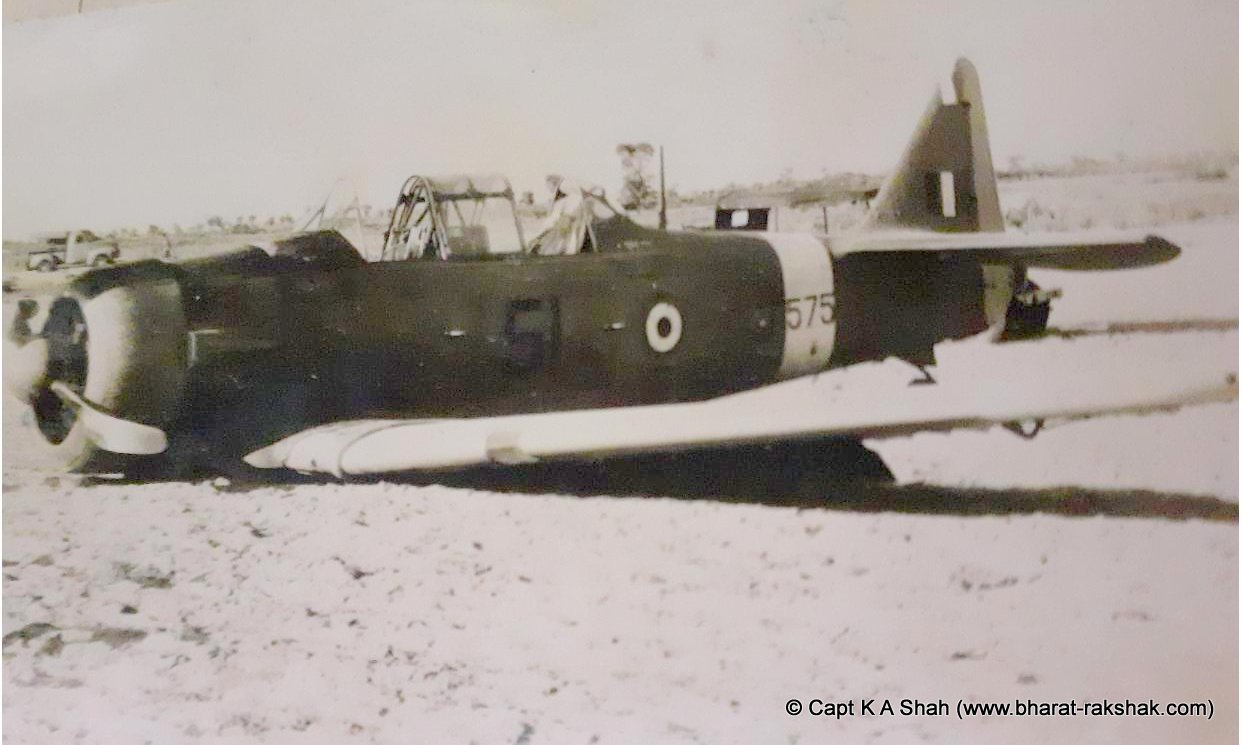 Harvard IT-1575 after the belly landing.

This is really true. Hardly three months had gone by since my first Forced Landing due to engine failure at 1300 ft when I had to Belly flop in a ploughed field near Jodhpur airfield on 23rd August 1963.

The summer heat had gone. On 6th November, 1963 I took off from Jodhpur at 1530 in a Harvard –T6G No. IT-274. My pupil was F/C J.S. Bhinder of 87/88th course. After about 25 mts in the local flying area at about 4000 ft, without any warning, my Engine started vibrating and I felt the loss of power. I throttled back and noticed black thick smoke from the engine exhaust. (This was later discovered as Impeller Bearing Failure).There was no response to the throttle so I switched off the engine and reconciled myself to another Forced Landing.

This time I had height and EXPERIENCE. I asked my pupil to follow me on the controls and pattered him down. We were aware of the grass farm nearby and with the height available I had enough time to plan and execute the approach.

Belly landing was the recommended thing but with the grass field looking so beautifully inviting and my confidence level enhanced, I decided to lower my under-carriage for a Wheels-down landing. My guardian angel guided us down to a safe landing, sufficiently clear of the fence. The landing run was like driving on a dug-up road. Gentle braking brought us to a stop. There was no feeling of relief as I had experienced after my earlier belly landing. There was a feeling of satisfaction on a job well done.

We reported to the Tower that we landed safely in the field. After getting out, when we went to the starboard side of the aircraft, it was black from oil spilled by the engine exhaust. After my earlier Belly landing, I had reported to my Commandant (Air Cmde Victor Srihari) and C.I (Gp Capt C G I Phillip) how thirsty we feel after getting out of the aircraft. I admire these wonderful people for remembering this. We were surprised to see a Harvard flying over us and on the second run they dropped something for us. We were even more surprised that they were WATER BOTTLES to quench our thirst. How could I forget these people?

Unlike the belly landed a/c which was dismantled and taken by trailer (Queen Mary), this aircraft’s wings were removed and it was towed back to base on its own wheels. Life went on and experience brought even more confidence for my next. 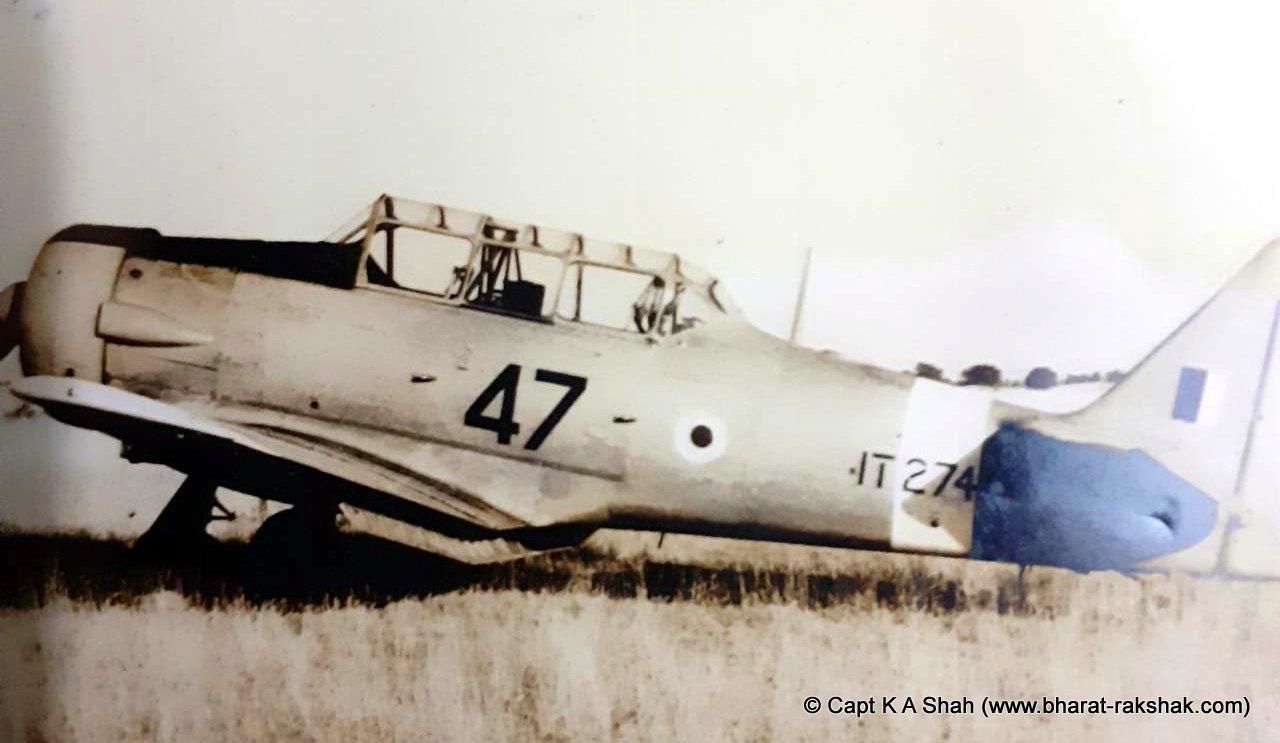 Compared to the earlier two Forced landings, this one became insignificant. My experience had increased and so had my confidence level.

On 29th March, 1965 I was authorised a General Flying instructional sortie in a Harvard IV, BT-961 a/c with Flt Cdt Winston Evans, of the 95th course. I was interested in knowing his progress and the Flight Commander asked me to brush up his aerobatics.

We were operating from the short runway and the local flying area was between Jodhpur and Banar our satellite airfield besides Salawas on the other side. I was keeping the road and railway line as reference. After flying for about half an hour, on completing a stall turn, he opened throttle to climb away; the engine failed and there was no power. I took over and throttled back and the engine picked up. I opened throttle but beyond half an inch of throttle there was no response from the engine and no power. We were facing towards Jodhpur, parallel to the railway line and a little above 4000 ft. Forced down to land, I was in familiar territory. No MAYDAY this time though the situation was similar.

I informed the tower that I was in an emergency and required priority to land on the short runway. I had no power from the engine and heading towards the downwind of the runway in use. Tower informed me that the runway was all mine. I stretched the glide with the trickle of power available and reached the downwind leg. So far all was well. Can’t make a mistake. Undershoot and there was no power. Overshoot and no power to go round. As expected of me all went well. With a perfect approach as the situation demanded, I landed safely. The Tower asked me if I needed assistance. Cleared the runway and the aircraft was still moving with near idling power. Negative assistance. Came into the dispersal, parked and switched off.

Reported the SNAG to the Engineering staff. Completed formalities.

All in the Flight office were happy. “You did it again SHAH”. Piece of cake this time! Not Over-confident. Just assured and experienced.

Thank Heavens all went well as the two pilots in the aircraft were related. Flt Cdt Evans’ sister was my WIFE.

Flt Cdt Winston Evans 10592 F(P), who was flying with the author during the third incident, is the brother of  Flt Lt Walter Evans Aux 30138 GD(P), who previously had to bale out from a Harvard trainer that did not recover from a spin and claimed the life of his instructor Flt Lt J Vijayaraghavan 4483 GD(P).  Flt Lt Vijayaraghavan was awarded the Ashoka Chakra Class II (later Kirti Chakra).