When the going gets tough, the tough get going.

It was Winston Churchill who said after the Battle of Britain during the 2nd World War:

He was talking mainly about his gallant RAF pilots, flying well-armed Spitfires and Hurricanes who successfully resisted raids by the German Air Force

In the context of the Chinese War of 1962, in the NEFA , Ladakh, Leh ,and Bhutan sectors, I would like to modify the above to say: “Never before in the history of  Indian Air Force conflicts have so few risked their lives, as ‘sitting ducks’, under enemy fire, in primitive unarmed helicopters, to save  the lives of so many” This is with due respect to the late ‘Old Man’ and crews of our transport fleet who have distinguished themselves in past encounters.,under similar conditions.

When the bubble burst on 20 October, the demands for HCs from No 110 HU increased tremendously and our boys were flying practically around the clock on varied missions

As I have stated earlier, I am not able to give exact statistics, but the following, from reliable sources, and my personal interactions with the pilots, will give  readers an idea of the Units accomplishments:

? Supply dropping and airlifting supplies to and from remote helipads and DZs.

? Operating detachments in support of the Army

? Rescue/ casualty evacuation and airlift of civilians and troops.

? Flying 3 sorties/pilot/day on an average

? Repair and servicing of a MI4 HC, . which had been shot down near Walong ( details below)

? Many records broken as to tonnage of supplies dropped, no of casualties evacuated, no of lives saved, no of flying hours, no of landings to deliver supplies

The importance of Tezpur airfield at its strategic location, in Assam, 20 miles from  Foothills on the NEFA border, must have been suddenly realized at the top level. Capture of the airfield (with its defenders, - IAF ground staff of No 11 Wing & No 110HU) would have thrown open the whole of Assam with its oilfields and more. This fact, coupled with the reverses suffered by the Army in NEFA prompted the Govt to set up the High level No 1 Operational Group and 5 TAC  at Tezpur, in mid October, to conduct  Air Force activities, in conjunction with HQ 4 Corps.

No 11 Wing and No 110HU now came under the functional control of No 1 Group. A Group Liasion Officer (Major)   was positioned at our base with a LMG and a few jawans to protect the airfield.

If war was to be won by Blood and Guts alone- as Gen. George Patton said- was this back-up sufficient? A major decision at this time was to order our fighters and bombers NOT to take any part in the operations and consequently the Vampire and Toofani squadrons were flown out to bases in the rear, leaving No 110 HU to face the music.

The situation in the Subansiri, Lohit and Kameng sectors of NEFA had become hopeless with the fall of important  bastions, but the Army still felt it could hold on to the Se La pass.When this was  cleverly by-passed by the Chinese, the threats to Walong and the  Towang – BomdiLa road increased. As winter had set in and the weather conditions were hazardous, airdropping of supplies could not be carried out effectively, but sorties were done to evacuate casualties, frost-bite cases etc

In retrospect, while  our Transport fleet of Daks, Packets, AN-12s, IL-14s, and Super Connies did a magnificent job, in their spheres of action, the role played by our MI4s  in the mountains of NEFA  by the 110 HU boys was no less praiseworthy.

The battles at Walong constitute perhaps one of the greatest acts of heroism in our Army history, where about 3000 officers and men repulsed not less than 15 fierce attacks by a full Chinese division of 15000 men. Eventually, Chinese firepower, manpower and superior tactics prevailed and our forces were overwhelmed, suffering many casualties there. Many cases of bravery and heroism of our Officers and jawans came to light later.

On 18 Nov 62, our OC, Flt Lt K KSaini and Flt Lt K K Deb were ordered to evacuate battle casualties from the Walong area   by landing at a helipad, reported to be free of Chinese troops. As they approached the helipad, the Chinese opened fire and the helicopter was hit at several places.causing severe damage. Flt Lt Saini himself was badly injured in the leg which started bleeding. He used great presence of mind and steered the helicopter to safety, to avoid further damage by enemy fire, thus saving the helicopter and the lives of the co-pilot and himself . Flt Lt Saini was awarded the Vir Chakra for his courage, determination and professional skill. This was one of the few Vr Cs awarded to Mil-4 helicopter pilots. for which No 110HU can feel justifiably proud.

News had got around that the Chinese had cut the road near Bomdi La and were heading southwards. On 18 Nov.the airfield and surroundings were a beehive of activity.

? Daks were landing and taking off at regular intervals. On 18 Nov there were 15 of them, parked nose-to-tail on the tarmac. Our Stn Cdr Gp Capt Bhawnani was all over the place, calm and cool, stoic and giving instructions. Can you believe that he used to personally marshall the a/c after landing, and guide them to their parking spots, for he knew their schedules exactly? Evacuation of civilians went on, in full swing.

? Our HCs were dispersed to nearby Army helipads, where they could be of use  when required. One was left at base, to make a Saigon- like escape!?

? Tezpur was a ghost town that day, deserted and all shops locked up. At the Officers Mess, all cooks, waiters, sweepers, our personal bearers and other civilians had run away. The Home Ministry had, I believe, asked all its staff at Tezpur, to move out and they did so eagerly.The DC of Tezpur also pushed off, for which he was later chastised.. At other places they were to burn the oilfields and Power-plants. The State Bank of India made a big bonfire of all its banknotes and shut up shop.

? Our Servicemens families, back home were desperate for news, but there was no means of getting in touch with them Many had given up hope of our survival

? The Army GLO, his staff, the LMG and  about  50 men, took off, leaving the airfield defenceless.( I am not privy to the decisions taken and by whom but I’m sure Gp Capt Bhawnani would have given a comprehensive report on these events and how we were left in the lurch)

? We were told to place kerosene oil tins, axes etc at all vital installations, in readiness for destruction at short notice.

? In deference to our Service personnel, I must say they stuck to their posts loyally.

? Our Admin and Logistics  staff were ordered not to stick to procedures. No vouchers, for instance when items were required urgently- just a note.

? From early morning, there was a procession of cars landing up at our tarmac The occupants turned out to be tea planters with their families. They rushed to us, after locking their cars, saying that they wanted to go to various places – Calcutta, Baghdogra, and even UK, many even offering the car keys to us. “Boy, we’re off ,you can have my car” ( I wish I had kept the 3 car keys offered to me)!

Here again, our Stn Cdr was in full control of the situation. He had detailed an Officer to make note of all the cars around, the names of the owners, Regn Nos and even the possessions left behind in the car (as far as possible). Then he directed the menfolk to take their families to a particular Dak depending on their destination. The Daks flew off, one by one. It may be hard to believe, but there were 53 cars parked at the airfield that day. 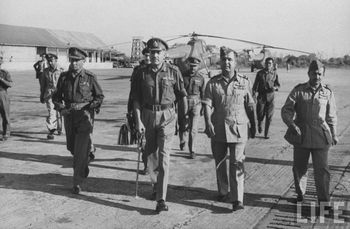 Around 25  Nov, when the whole show was over, they all returned, asking very sheepishly  “May I have my car please” To the credit of the Air Force and its solicitude, every single car was returned to the owners, as per the list .It was gratitude unlimited, thereafter, between the Planters and the Air Force at Tezpur.