Around 1960 Sqn Ldr Chandan Singh was a flight commander in 43 and he opened up valley routes for operation to Kargil, Leh, Thoise, Fukche and Chushul airstrips and to many DZs. Soon after, the C-119G Packets operated in strength and the AN-12s entered the scene. Fukche and Chushul were handed over to the Packets while Leh and Chushul became the mainstay of the AN-12s. In 1962 43 squadron operated to Kargil , Leh and Thoise airstrips and to Sultan Chushku DZ. Except for Leh, we were the only fixed wing operators to these places. In winter, Zoji La was snowed under and the whole of Ladakh was purely air maintained. Thoise and Sultan Chushku were air maintained even in summer. Our squadron offices were in tents and so was living accommodation in Jammu.

Wg Cdr DM Oak, my battalion commander in NDA, commanded the squadron in early 1962. He was posted out without a replacement and Sqn Ldr JS Gill, the Navigation Leader officiated during the war. Sqn Ldr A Chakravarti was the flight commander and ran the operations. 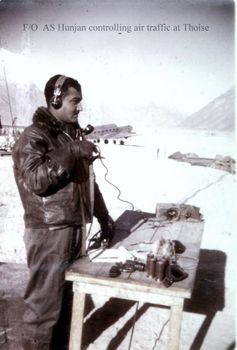 Fg Offr A S Hunjan at makeshift ATC at Thoise

HAL personnel manned the first line servicing and they did a tremendous job. 2nd line servicing was at Agra and 4th line at Barrackpore, all with HAL. Flt Lt CK Subramanian was the Eng Offr.

During the war, 43 squadron flew much more than in normal times. Experienced crew had been pulled out to fly the AN-12s, IL-14s and Packets. We operated accident free in 1962. Considering the inexperienced crew, this was a major achievement.

I was sent to Leh for ATC duties for the first fortnight of Sept 62. Thanks to bad weather on the day I was due to be relieved, I stayed for another fortnight. I was able to fly to a number of helipads in the Mi-4s of 107 Helicopter Unit. Standing on the ladder behind the co-pilot in the bone shaker that was the Mi-4 was quite an experience.

20 Oct 62 was a bright sunny day. I was co-pilot to Fg Offr Kaura. We did not have a navigator and Fg Offr Kaura said I would not know the way to Sultan Chushku. I took a bet that I would navigate there without looking at the map. Rs 100 and the prestige of the large gang of Pilot Officers in the crew room was at stake. As usual we took off at dawn. During the climb Kaura handed over controls to me. I gave the controls back to him over Sultan Chushku. Not a word exchanged. Hand signals all the way. But everything changed during the drop. Sqn Ldr Chandan Singh, now flying AN-12s, was fired upon near Chushul. He reported the Chinese attack. Operations Control recalled all aircraft. We completed the drop and only then returned.

The balloon was up. We were not at all surprised but it turned out that the higher ups in Delhi were in shock. It took a day for the Army to mobilize additional troops. From 22 October onwards we airlifted troops. The first batch were wooden faced Gurkhas shod in Bata Hunter shoes. Not even tents for them, just bivouacs. They obviously knew what they were in for. Subsequently, we airlifted tents, rations and building materials. Casualties during the war were mainly due to frostbite. 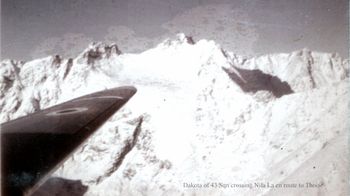 We had one aircraft IJ392 where the heaters did not work. We normally kept it for local training flying. During the hostilities it was pressed into service to the forward areas. I (foolishly ?) volunteered to fly in this and got an unforgettable experience.

On 06 Nov 62 I was co-pilot to Flt Lt Chengappa when we did an ammunition drop at Murgo. The DZ was in a narrow valley at an elevation of 14,000 feet where the Dakota is gasping for air. The circuit consisted of maximum rate steep turns. The good ole Dakota never let us down. The Army ejection crew got frozen stiff in the cold blast from the open door. As soon as the drop was over, we brought them into the warm crew cabin. Exhausted, they gradually recovered after breathing oxygen from the portable bottles.

We flew on all days, weather permitting. 28 October was Diwali and we celebrated it by watching the twin navigation lights of IL-14s taking off in the pre-dawn darkness. Air Cmde Ananthanarayanan was AOC J&K . He passed an order that all aircrew were to be given a weekly off. Our CO and Flt Cdr ensured this was done. But hey ! There was a war on and our sister squadron, 42, on the other side of the runway was short of pilots. On our days off, we slipped into the 42 sqn bus instead of our own. Never mind that we were not qualified on the Ilyushin-14.

During the war one of our aircraft went unserviceable at Kargil and an HAL party camped there to change the engine. When the aircraft was ready a crew had to be sent to retrieve the ac. Instead of sending the crew by the first wave of flights, the CO & Flt Cdr decided to send them by the 3rd wave. You guessed it. The weather packed up and they couldn't go. This went on for several days. To be fair to the leadership, crew were short and they were utilising the crew for the first wave and sending them for the ferry in the 3rd wave. However, Ops Command and Air HQ looked at it differently and relieved the CO of command. Wg Cdr HS Dhillon came as replacement but after the war was over.

During the war, the squadron moved to Jammu without missing any forward area flying. After the cease fire, the tempo of flying remained high. Building materials and rations were the main cargo. We spent so much time airborne that I felt I was a bird.

43 was the only fixed wing squadron operating to Kargil and Thoise. The road through Zoji La was closed in winter. And there was no road between Leh and Thoise. So, for the Army personnel in these two sectors, 43 was truly their "Nabhsa Jeevan Dhara" [Lifeline Through the Sky].

Wg Cdr Joseph Thomas, VM is an aeronautical engineer and test pilot. He has flown over 6000 hrs on 30 different aircraft. He has commanded a strategic reconnaissance squadron and founded the IAF Test Pilots School. This article was originally published at Salute Magazine and is also available at www.amolak.in