How I Too Nearly Missed The War!*

How I Too Nearly Missed The War!*

*This article is inspired by Air Marshal Raghavendran's article with a similar title.

I was in seven squadron,equipped with Hunters,and based at Halwara, during the 1965 war with Pakistan. When the hostilities started in the first week of September, the air activity was confined to the Chhamb Sector in the J & K, where only the Gnats and Mysteres were participating. On the 3rd or 4th of September , I got a telephone call from then Wing Commander Mally Wollen ( I do not recollect what his designation was ). He asked me if I would like to join the Gnat detachment as they were short of qualified pilots. I told him that I had very limited experience on the Gnats.

My total flying consisted of about 7 hours after an abridged conversion by Mally and Ashok during my PAI days at Jamnagar, when the latter had brought their Handling Flight there. Mally said the choice was mine and the limited flight time was no problem. Like many others in our squadron, I too thought that we would miss air action at Halwara. So I spoke to our squadron commander, Wg Cdr Zachariah. I told him about Mally's telephonic call and requested him to let me go and fly with the Gnat squadron. He agreed and I was asked to report to Ambala on the 6th September.I packed my bags on the 5th evening and loaded in my Standard Herald car. That night , I was duty officer in the Base Operations Room. I couldn't believe my eyes when I received one of the messages asking the base to mount air strike missions the next morning! I was now in a dilemma. Having agreed to join the Gnats, the best I could do was to get a taste of action with the Hunters as well. I immediately drove upto Zach's place,told him about the secret message and requested him to let me fly as many missions as possible the next day before I left for Ambala.I was part of the first strike on 6th morning. The mission was to fly just inside Pak border, search and detroy targets of opportunity! This mission later came to be known as the "Tonga Strike", because that's what we hit apart from letting go salvos of 68mm rockets into some thick mango groves etc. I flew two more missions that day. Late afternoon, I set out from the Officers Mess in my car, cursing my choice to go to Ambala. I had covered less than a couple hundred yards when I heard the air raid sirens sound and ack ack guns opened up. I decided to route via the base ops room to find out what was going on.

The whole place was full of excitement. Adi Gandhi and Pingo were there in their flying overalls, having just ejected over the airfield, their aircraft being shot down by the Sabre strike. Two Sabres ,too, were shot down by our boys. I also learnt that Peter Rawlley had not returned from the air strike near Lahore. Zach was there and took me along to see Ramola Rawlley. That's when I decided to stay put and told Zach accordingly. My place was in Halwara and so it would remain. 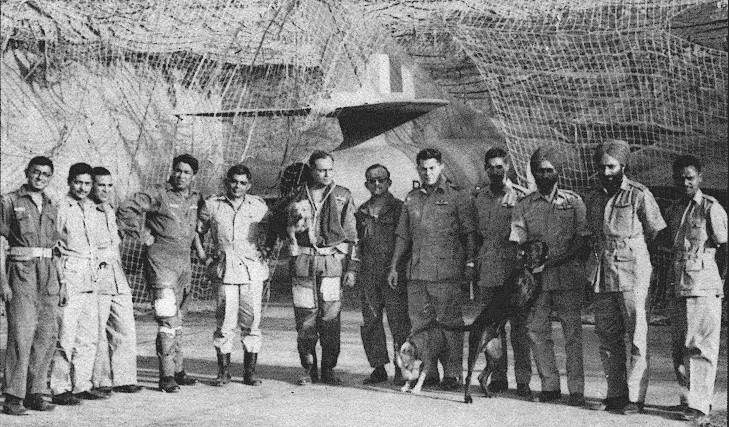 The rest is history and many of my colleagues have written about the short-lived war. In fact, Jagan spent half a day with me some years back, recounting my Halwara days. It was a very satisfying experience for me personally, although, I feel that we could have conducted the operations in a much better way.