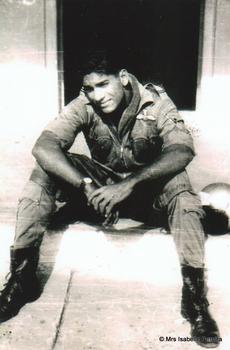 Lawrence Frederic Pereira was born in Bandra, Bombay on the 10th June 1945 , he was the second of six siblings and was affectionately called "Lawrie" by his family and friends. His early formative years were spent in Goa , he lived with his Uncle and aunt and studied in St Pauls High School , Belgaum.  Laurie completed his education in St Stanislaus School , Bombay now Mumbai.  He belonged to the Famous Four from St Stanislaus all of whom joined the IAF and were selected to be fighter pilots, the school is very proud of their achievements.

On the 10th March 1963 he started his basic training in the IAF at the Air Force Administrative College in Coimbatore. He was commissioned on the 01 August 1964, in the 89/90th Pilots Course. In his early career - he attended several training courses  and postings. One of his first postings after becoming a pilot was with No.220 Squadron at Pune. 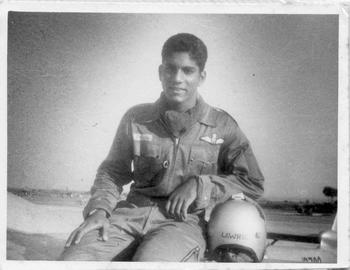 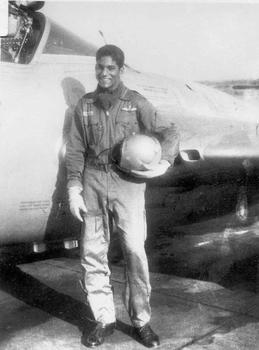 Lawrie from his days with No.221 Squadron - flying the Vampires. Note the helmet with his call sign painted on the back "Lawrie"

He played an active part in the 1965 Indo Pak Conflict.

After the war, he was posted to a Gnat Unit - where he trained on the dimunitive fighter. 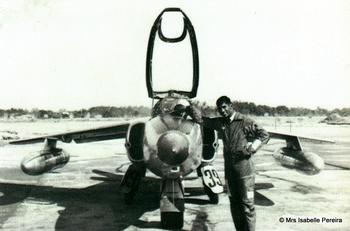 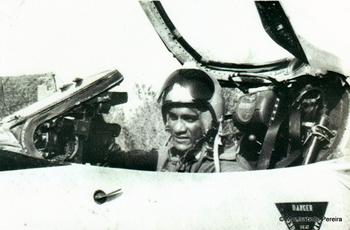 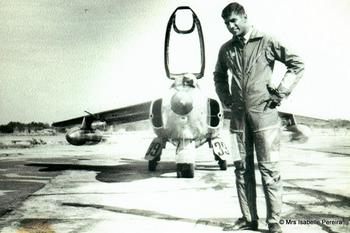 Lawrie Pereira with his Gnat. Compared to the dimunitive size of this fighter, the Sukhoi-7 would have looked gigantic.

In 1967 he met his future wife Isabelle who was in the Military Nursing Service and visiting her uncle and aunt on holiday in Ambala, he was a flying officer at the time.  In 1968 he was promoted to Flight Lieutenant and married on the 12th September 1970 while still stationed in Ambala.

In December of the same year he was sent to Bareilly to do a conversion course on the Sukhoi- 7, Isabelle packed up their home of 3 months and moved to rented accommodation in the town . On completion of the course he was posted to Adampur where the couple house hopped just to be with each other while on the waiting for a house . Laurie was now on the posted strength of No.26 Squadron, IAF.

Outbreak of the War

On the 13th September 1971 he was the proud father to Nicole Annabelle , the family happiness was short lived when war broke out in East Pakistan , now Bangladesh,  escalating to the western border  when Laurie was deputed as Forward Air Controller with  the 2nd Independent Armoured Brigade a powerful tank unit equipped with T55 tanks. Laurie was the dashing young officer who captured the hearts of the brigade right from the first day of his deputation, he was loved for his warm and generous character and got on fabulously with the crew and fellow officers.  One of the Army officers in the brigade at that time was Lt Col J K Dutt, of the Central India Horse,  who fondly remembers:

"JUNE 1971 was as hot as any summer in central India. We were out on a military exercise with full complements, far away from our cantonment at Bina near Jhansi. I was the Brigade Major (senior operational staff officer) of the Indian Army's 2nd Independent Armoured Brigade, a powerful tank unit equipped with the Russian T 55 tank. My commander, Brigadier Roy Thumby had recently returned from an operational conference at HQ 1st Corps, Mathura. His grapevine conveyed that there would be a war with Pakistan before the year was out; So we were "shaking ourselves out" in exercise parlance, making sure that men and material were fully fit for battle. Being a tank brigade, we were on high priority for air support from the Indian Air Force. Arrangements for this were set in motion and soon enough, a dashing young Flight Lieutenant, Lawrence (Laurie) Pereira, joined us as our air support officer. He and I quickly got down to the business of processing air support for our projected operations. He was a thorough professional and the two of us made a good team. Laurie captured our hearts from the very first day. He got on fabulously with the tank crews who would welcome "Laurie Saab" with the traditional tanker's brew whenever an opportunity presented itself during the exercise. He took great pains to familiarise himself with the T 55 tank and ended up driving it like an expert. When the exercise finished after five days or so and time came for Laurie to go, he extracted a promise from Brig Thumby that should we go to war, the Brigadier would ask for Laurie by name as the air support officer for our brigade . Brig Thumby readily agreed. We made Laurie an "honorary tanker" and presented him with the armoured crops' black beret which he donned with great pride and affection. Events proceeded fast thereafter and by mid November we were in our concentration area near Pathankot, putting final touches to our preparations. War was certain now.

Then one fine morning who should stride in with a wide grin but Laurie; Brig. Thumby had pulled all possible strings to get him. The brigade's morale went up sky high on seeing him and we waited expectantly for D Day. On 4th December, I issued the necessary operation orders and our leading elements, Skinner's Horse along with the 1st Dogras debouched in the evening, crossing the international border near the village of Chak Amru. The brigade's  other two tank regiments, 7th Cavalry and The Scinde Horse, also advanced into Pakistan to deploy for battle. The 1st Corps' objective was Shakargarh and as battle was joined, the Western Front became truly alive.

For the next few days Laurie was like a man possessed - he was here, there, everywhere. With no consideration for his safety, he would go right up ahead with the front tanks or rush off to a flank in his vehicle, communicating with our IAF's Sukhois and directing them to strafe Pakistani tanks day in and day out. He was indefatigable in his zeal ! I had also participated in the 1965 Indo-Pak war but the air support that we got this time from the IAF was incomparable, courtesy Laurie. The brigade suffered quite a few casualties but it pressed on regardless till we reached the outskirts of Shakargarh."

On the 14th December 1971 while performing his duties, Laurie Pereira was hit by enemy bullets, when an enemy aircraft strafed the brigade location which was at Shakargarh in Pakistan.  Laurie’s dying words were , “ tell my little girl (his wife Isabelle ) to be brave.  Colonel Dutt recalls that fateful day:

"I shall never forget 14th December. I had an ominous feeling preying on me all day, which began badly with one of our forward artillery observer's tanks being shot up by Pakistani MIGs. Soon after, I was witness to another incident; a MIG chased an air observation post fixed-wing aircraft. The latter tried desperately to save itself by flying low but to no avail. The MIG lined it up in its sight and let go a long burst of cannon fire, literally crumbling up the aircraft and its pilot.

Sometimes later I was crouched over my command radio set in the opera-tions tent when my foreboding were realised. The dreaded news came on air. The brigade Commander's tank with Brig Thumby in it had been strafed by the MIGs. He was unhurt but Laurie, who had been standing next to him beside the turret trying to manage some Sukhois, took a burst of cannon fire on his chest. He was evacuated, but succumbed to his injuries. He was 26.

The last days of the war became a drag without Laurie things were just not the same. More than once I had hallucinations of Laurie gathering his Sukhois for a swoop on the enemy's troops. Although we did not have an IAF officer with us anymore, the air support continued unabated even as I processed our demands alone. Ceasefire ushered a pall of gloom to the brigade instead of joy. It was indeed a testimony to Laurie's spirit that his death could so affect us. The day after ceasefire we assembled in our makeshift officers' mess in the field. There was sadness in the air. Laurie had been awarded a posthumous Vir Chakra but how would this help his young widow Isabelle, I thought ?

I missed him intensely. Brig Thumby, who was equally fond of him was silent and withdrawn; the other staff officer stood by quietly. Later, we raised a silent toast to Laurie, trying to console ourselves with the divine grace, "Thy will be done". Only, it did not seem consolation enough." 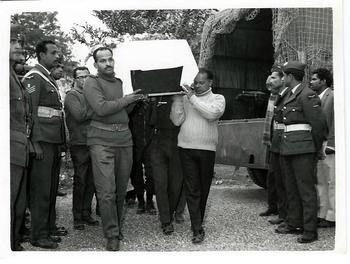 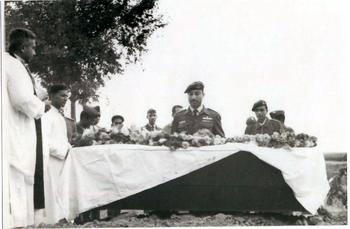 Pereira was buried at the Jalandhar Cemetery with full military honours.

His grave was covered with a large marble slab with the epitaph:

BELOVED HUSBAND OF ISABELLE
AND FATHER OF NICOLE

THE GOLDEN GATES STOOD WIDE OPEN
ON THAT SAD DREARY INAUSPICIOUS DAY
SWIFTLY AND SILENTLY WITH FAREWELLS LEFT UNSPOKEN
SOFTLY AND PEACEFULLY YOU SUDDENLY SLIPPED AWAY
INSERTED BY :- HIS LOVING WIFE AND DARLING DAUGHTER

Laurie was awarded the Vir Chakra  for displaying  gallantry, determination and devotion to duty of a high calibre throughout.  One of the few awards to Officers serving as Forward Air Controllers. Laurie Pereira happens to be the only IAF Officer killed in the line of duty as an FAC.

Today, the location of LF Pereira has been lost due to neglect. The diocese of Jullunder (St Mary's Church) stopped using the RA Cemetery for Catholic burials, and the Cemetery suffered neglect, as a result of which, sadly, it is not possible to locate Flt Lt Pereira's grave today, even though the grave  and the head-stones were solid marble, there was no trace of his grave. Last year, at the request of a senior Veteran friend of Wg Cdr Ravi mani, Lt Gen Dilip N. Desai, PVSM, AVSM, VSM (18 CAV), the GOC of 1 Armd Div sent across a search party to Jullunder to find Flt Lt Pereira's grave-sadly, the entire cemetery is in a shambles, and most of the grave stones and slabs are nowhere to be seen. The last resting place of a war hero is no longer known. 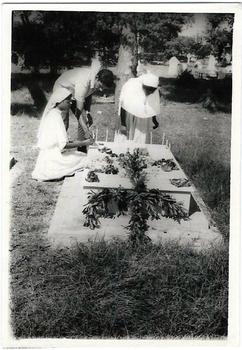 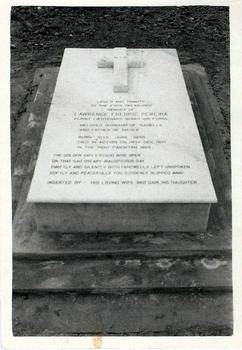 The grave of L F Pereira. Today there is no trace of the grave . All efforts to locate it failed.