Gen Sagat Singh was from the famed parachutist brigade, a proponent of manoeuvre battle, vertical envelopment, bypassing the Maginot lines of terrain and enemy. The success of the Sylhet operation must have given him the confidence to now go for the jugular, at Dacca, across the formidable obstacle of Meghna river, which neither friends nor foe had deemed possible. Our second SHBO was from Brahmanbaria to Raipura, to air lift the battalion of 4 Guards in the evening hours of 9 Dec 71, over a distance of 25 km, deep into East Pak’s under belly.

Another interesting incident then happened. 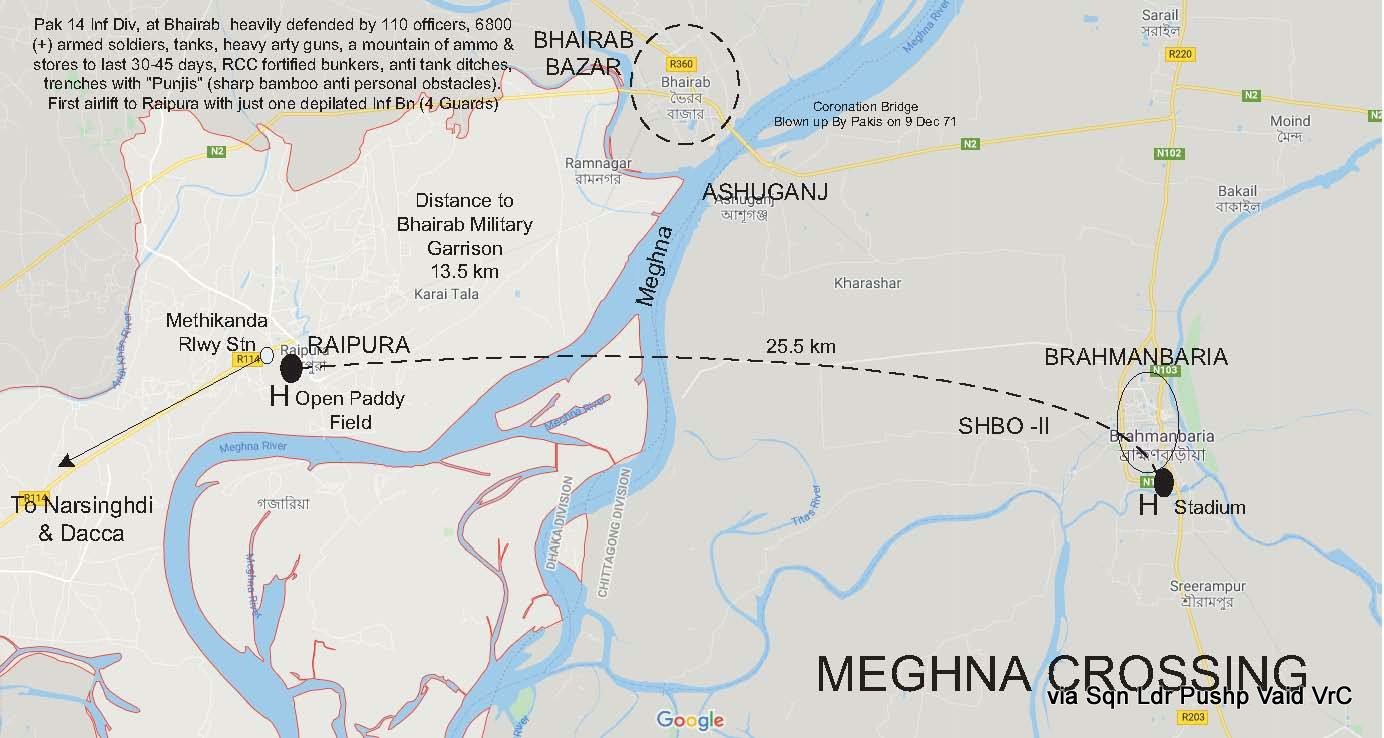 Sometime around 11-1130 hrs on 9th Dec, Gen Sagat Singh took Brig Mishra25, Col Himmeth Singh CO 4 Guards, my OC Sandhu and I, in an unarmed Alouette of 115 HU, flown by Fg Offrs Sidhu and Jitu Sahi to reconnoitre a suitable landing area across the Meghna near Raipura which Sagat / Mishra had chosen from terrain map as suitable for inserting 4 Guards – our next SHBO.

On the flight out, the Alouette climbed up to 5000 feet to stay away from small arms fire. After we had selected our landing zones, two open paddy fields a km apart, about 3-4 km south of Methikanda Rlwy Stn, we returned. Half way back, abeam Ashuganj, Sagat told the pilot that Ashuganj was under Indian control and that he wanted to go low to take a look at how 10 Bihar and 18 Rajput, with 2 EBR support group were fairing. It was Sagat’s habit to overfly and get an immediate first-hand view of all battles in his corps sector on an hourly basis. When we were perhaps 1000 feet or below, nearing a bund at Ashuganj, suddenly we heard “phut-phut –phut” noise, and there were bullet holes in the Alouette – at least a dozen if not more. Fg Offr Sidhu was hit by a bullet that had come through the instrument panel and went through his shoulder and got buried in backrest behind him. Another bullet or shard of the Perspex creased Sagat’s forehead.

I was just two feet behind the pilot’s back rest! Very close. Fg Offr Jeetu Sahi immediately took over controls, climbed rapidly and landed back at Brahmanbaria.

After surveying an open stadium [26], next to a stream [27] south of Brahmanbaria as a suitable launch pad, we returned to Agartala, where Sidhu was evacuated to Teliamora field hospital. I discovered later that there were 38 bullet holes in that helicopter ! Wow - and only one person who got injured was Sidhu. Sagat was “Monk” like, absolutely unfazed, didn’t even blink. Later, we heard 10 Bihar (or perhaps 18 Rajput) boasting that they had shot down a Paki Alouette. But we joked that they deserved ‘battle honours’ at Ashuganj, for trying to shoot down their own Corps Cdr and Bde Cdr !! 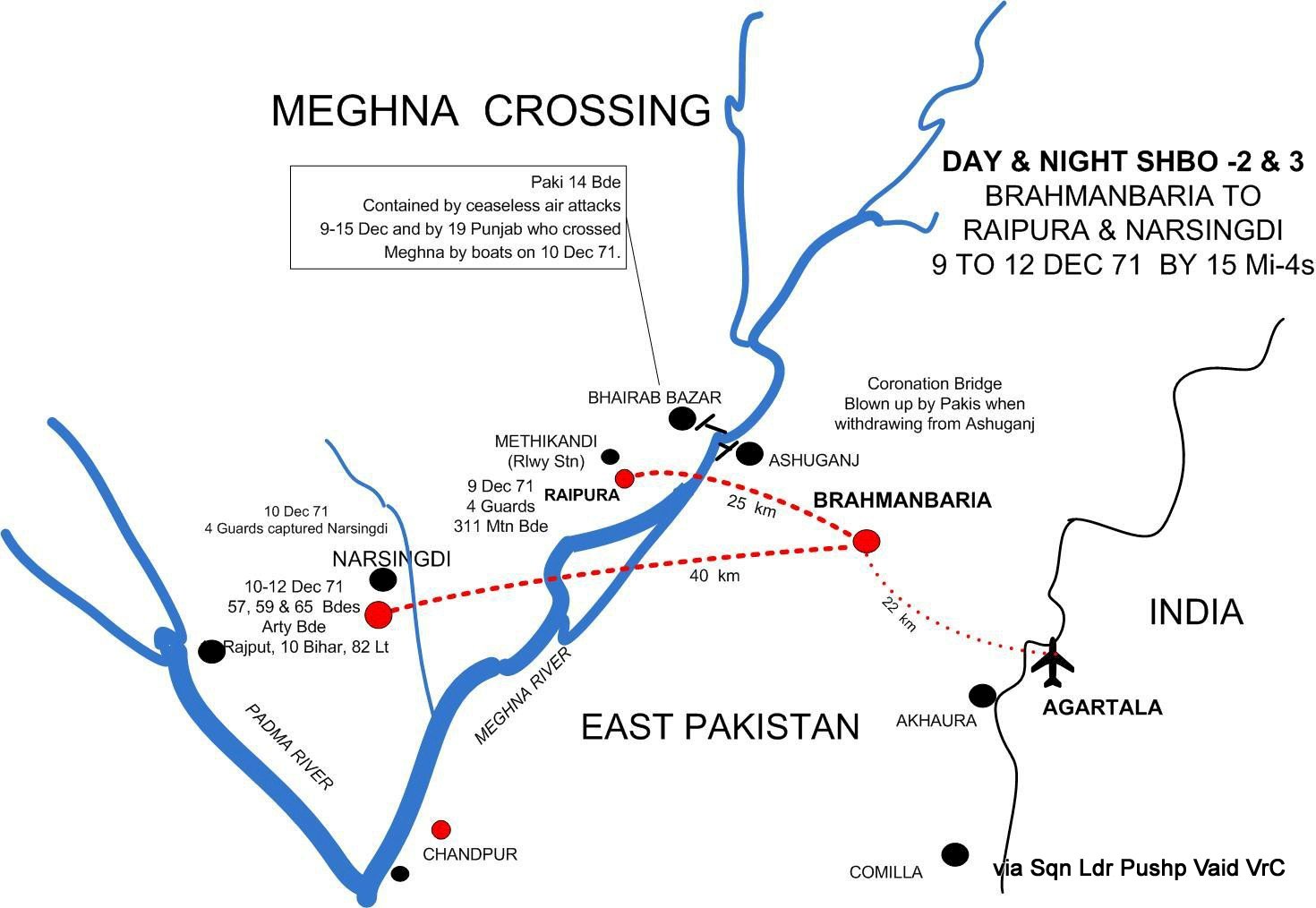 I then took my lot to Brahmanbaria stadium. When we landed there and shut down, we saw hundreds of dead bodies near the riverside where we had landed. We asked the locals what had happened and they told us that the Pakistan army had rounded up all the people from the village, as well as Prisoners of War, and shot all behind their head before withdrawing. It was my first horrifying sight of wanton Paki genocide that left an ever-lasting impression in my mind.

For our SHBO that evening to Raipura, I split up the helicopters in two groups of four. We had planned two landing sites, once again large paddy fields devoid of crop, across the Meghna river, about one kilometre apart. I was to go across the river, land to discharge the troops and their cargo. And after take-off, turn left to come back to Brahmanbaria. My group of 4 helicopters was to follow me 2- 3 minutes apart. The other group following was to take off and land on the right field and after take-off – go right and come back to Brahmanbaria the same way. The briefing was “no overshooting”. If the preceding helicopter was still on ground, those following were to slow down, or land slightly to one or the other side. All this was to be in fading light and in pitch darkness afterwards.

4 Guards, fighting a battle on the outskirts of Ashuganj, were ordered to withdraw to Brahmanbaria. So it was about 1600 by the time they got back and loaded the Mi-4, within half an hour. They were an outstanding organised and feisty bunch, adept at SHBOs into Bhutan in their earlier days with 111 ex Hashimara, as also with 110 in Mizoram prior to 71 war.

I was in the first helicopter on the left, with Chandan, and Coy Cdr Alpha Coy Maj Chandrakant with his troops from Alpha Company. Also on board was FAC Flg Offr Dinky Shaheed with his GRU radio set. I got airborne, crossed Meghna and landed at Raipura 25 km away. 4 Grds jumped out quickly, and I was just going to pull up my collective, but my instinct told me to wait. Thirty seconds later, sure enough I saw the helicopter behind me overshoot, right on top of me. If I had pulled up, I would have gone straight into him. Very lucky day for Chandan returning with us. I didn’t blink either, such things do happen in the excitement of war.

We used 8 helicopters, did 27 sorties, and ferried 4 Grds Alpha Coy and their load from Brahmanbaria to Raipura. In total, we ferried 309 troops and 2200 kgs. The FAC had quickly heaped two straw mountains and set fire to it. It burned and smouldered all night and acted as a beacon. Between 9 at night and 10 in the morning of 10th Dec, we continued the airlift, now we had 10 Mi-4s and we ferried 347 troops and 6000 kgs of load.

At about 0300, when we were loading up our helicopters at Brahmanbaria for the next shuttle across Meghna, one pilot called up on radio to say he had no load, then another, a third one and the 4th one too. I told everybody to shut down and have a break. I went to meet CO 4 Guards Lt Col Himmeth Singh, who was supposed to be supervising the despatch of his troops in our helicopters to check what was going on.

Himmeth told me rather sternly that he wanted all 10 helicopters for his Battalion to cross Meghna immediately. I got very annoyed and gave him a piece of my mind.

After couple of minutes he got my message. Thereafter, he organised quick loading, and we continued our flights. I did not know then that the feisty 4 Guards had to do a fighting retreat on foot over rough terrain of more than 25 km to get back to Brahmanbaria in time, with all their ammo and mortars, tents, bloody utensils, rations, even a 105 mm RCL, heckled by the Pakis with intense fire all the way. That Himmeth would not go to Raipura without his last man, while the head of the column Maj Chandrakant was racing from Methikanda towards Narsinghdi. He was an incredible commander. 4 Guards were the vanguards in the race to Dacca, fighting their way on foot, cycles, rickshaws, fire engine, and even a rail wagon pushed by cheering Bengali populace. By next day they were in Narsingdi, on the way to Dacca.

We kept flying the whole night and finished the mission of ferrying the entire Battal-ion of 4 Grds, Bengali pioneers, and their loads, to Raipura and returned to Agartala. That was just the beginning. Sagat and Chandan now wanted us to cart half of IV Corps cross Meghna supported by Arty and run to Narsinghdi. That was to be our next destination, for our third SHBO from Brahmanbaria to Narsinghdi to lift 10 Bihar, 18 Rajput, 311 Mtn Bde, 82 Lt Arty Rgt, followed by 59 Mtn Arty Rgt, and 65 Mtn Arty Rgt of 57 Mtn Arty Bde. The armour (Indp Armr Sqn with PT 76s) under Maj Shammi Mehta was to swim across Meghna and race forward to catch up at Narsing-di. Such an audacious plan would not even have struck Guderian, Rommel , Patton or Yamamoto in WW-II !

All our ten helicopters proceeded to Brahmanbaria with ground crew on 10th evening and spent the night there, There was no accommodation. So we managed to find an empty hall near the stadium and all 60 of us, officers and airmen squeezed into it for the night. There was nothing to eat and so we slept on empty stomach. Two more helicopters joined us from 111 HU on the 11th.

The task early on 11th Dec morning was to airlift two battalions (10 Bihar and 18 Rajput) and balance of 311 Bde + an artillery regiment (65 Mtn Rgt) involving 110 sorties. The field guns were to be broken down to fit into the Mi-4s. Now there was no Pakistan Army in the area to worry about - so we were flying and landing together in pre-reconnoitred big paddy fields, just south west of Narsinghdi..

The first wave of Mi-4s took off from Brahmanbaria at 0530 on 11 Dec and kept flying till 0720. We had ten helicopters and did three sorties each and we carried 321 troops and 7200 kgs of load to Narsinghdi. We then had little break and refuelled at Agartala. Our next rotation started at 0915 and continued till 1145. Again we had 10 helicopters - We lifted 252 troops and 16700 kgs of load. The load was mostly the Arty guns and its ammo. Miscellaneous logistics, including rations were being airdropped by Caribous at Narsinghdi with continuous top cover (close air support) by armed Otters & Chetak of Kilo Flight.

Our third rotation started after we had refuelled at Agartala around 1330. Again we had 10 helicopters and we carried 190 troops and 24,500 kgs of load. The focus was on Arty Guns.

After refuelling at Agartala our fourth rotation must have started around 1730 – we had 9 helicopters and each did one sortie, this time, and carried 54 troops and 8600 kgs of load including infantry weapon’s ammunition. So total for 11 Dec 71 was 815 troops and 65,200 kgs load and we did 99 sorties.

On 11 Dec 71, we also sent one helicopter back to Sylhet for casualty evacuation. Fg Offr BK Sharma and Fg Offr PVR Murthy did the evacuation at night because it was felt safer to land at night. Both pilots showed great skill and courage and evacuated 30 casualties in two sorties in spite of heavy ground fire. They also flew in urgently required ammunition required by troops. Z-349 helicopter came back with a number of bullet holes.

Another helicopter, Z-613, flown by Fg Offr B L Kanth Reddy - on its way back to Kumbhigram for maintenance inspection had an engine fire en-route and had to force land. The helicopter was completely burnt after landing, but the crew managed to escape unhurt.

A total of 35 sorties were done involving 35.15 hours flying and we carried 234 troops and 19,420 kgs of load from Brahmanbaria to Narsinghdi on 12th Dec. On 13th Dec, we continued our SHBO from Brahmanbaria to Narsinghdi. We did a total of 30 sorties involving 25 hours of flying. We had 10 helicopters and air lifted 282 troops and 14,850 kgs load.

From reconnaissance report of armed Kilo Flight Chetak over Daudkandi and Bhairab Bazar, it was reported that large number of ferries and country boats were still available at Daudkandi and that Pakis had run away across the Meghna to Dacca. On 13th Dec morning, Sagat Singh took Chandan and went to visit Maj Gen Rocky Hira, GoC 23 Mountain Div, trying to cross Meghna at its widest part at Chandpur. Sagat was impatient at the slow progress of 23 Div, and wanted them to cross over quickly and blockade the southern part of Dacca. So it was that Sagat and Chandan planned the 4th and the largest SHBO across the widest part of the mighty Meghna to take 23 Div across.