Back at Agartala, on 16th morning, we heard that Maj Gen Jacob was being sent from Calcutta to Dacca to discuss surrender terms. With Paki garrisons in Dacca surrounded from west, north, east and south, no place to run to, and the whole Bengali population hostile to Pakis, we stayed tuned into pocket radios confident that by the end of the day the sun would set on East Pakistan, and rise over a new democratic country called Bangladesh. Our morale went sky high when an Avro arrived at Agartala from Calcutta with Gen Aurora, his wife, V Adm Krishnan and their entourage. Soon another Avro arrived from Guhati with Air Msl Diwan and large number of IAF officers. Two more Avros brought journalist. By 3 O’clock Agartala was chock-a-block with Avros, Kilo Flt Dak, Alouettes from Tezpur & Bhagdogra, Air OP Chetaks and Krishaks from 659 Sqn, besides the valiant Mi-4s of 110, 105 and 111. Having done his job well, Chandan returned to Jorhat.

Dacca (Tejgaon) runway had been severely bombed, with many large craters, and was unfit for use except by helicopters. Therefore, it was decided to fly the VIPs to Dacca in Alouettes with white seat cover. The war was over for us. Mi-4s had no seat cover and besides VIPs didn’t like to fly in our cocktail shaker.

However, there were large number of lesser men, and the press reporters. So I was asked to fly them to Dacca in Mi-4s. I was told that my pilots not needed for flying duties should be left behind. However I ignored the instructions – I reasoned that after risking their lives and flying to their limit, my pilots and flight engineers deserved to see this once-in-a-lifetime surrender ceremony.

Therefore, all pilots and flight engineers, besides other personnel, who fought the war together with me were “smuggled” on board five Mi4s which followed the long line of Alouette helicopters heading for Dacca.

A tumultuous reception awaited us. Flying Officer S Krishnamurthy, called “Kruts” in 110, in his exuberance also managed to “photobomb” Gen Niazi signing the surrender document in presence of General Aurora and the who’s who of Indian military brass. Much to the chagrin of Gen Jacob, Kruts even had his hand over the General’s shoulder, in my opinion, a right display of camaraderie and exuberance of winning a war.

We took as many reporters as we could. There were, men and women reporters from so many different parts of the world. There was no restriction. We still had no clamshell doors or seat belts for passengers- they hung on to anything they could find, or to each other, can you imagine that ? We made no passenger manifest!

When we landed at Dhaka, and parked next to Pak International Terminal at Tezgaon, there were thousands of Bengalis milling about cheering us, each wanting to shake our hands or carry us on their shoulders. A multitude of cars, buses, rickshaws, cyclists, even bullock carts awaited to take us to witness the public surrender ceremony at Ramna Race Course.

It was like the movies, when the Americans drove into Paris at the end of WW2. It was a wonderful feeling of success and victory in war. There were so many Bengali peoples, with guns, firing in the air in jubilation. It is a wonder that none got shot.

Less than two weeks after the declaration of war, the Pakistani army surrendered with over 93,000 troops.

I have no recollection of how I came back to the airport from Ramna Race Course – just that we flew back at night to Agartala. After Bangladesh was formed – our helicopter kept going to Dacca and other locations in Bangladesh to help the Govt of Bangladesh and Indian Army maintain law and order. Well that is another story. 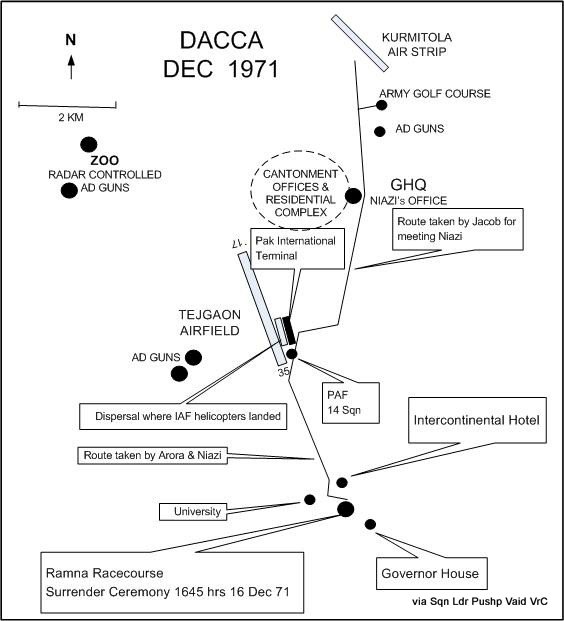 The whole Bangladesh war was one of the most wonderful experience of my life. I also had the good fortune to working with Lt Gen Sagat Singh and Gp Capt Chandan Singh – two of my heroes during the war.

(The SHBOs and Sagat’s actions didn’t end there. On the departure of the VIPs from Dacca on 16th evening, Sagat Singh was left behind as Military Administrator to bring Law & Order, care for PoWs & Bengalis alike, keep a control of the Mitro Bahini from executing Paki PsOW and await the Govt of BD in exile to come and take control. During the night of 16 Dec 71, Military Intelligence reported to him that a large number of Mizo rebels who had been sheltered by Pak army in the Chittagong tract- Rangmati area were making a break to Burma. Immediately he ordered another Mi-4 SHBO by 110 to airlift 2 Jat and other elements of Indian army from Chittagong to Parva and Lawngtlai (Mizoram) to intercept the Mizo rebels (Op Battle Axe, Dec 1971). But by the time the IA moved in to take control, the Mizo rebels escaped. Op Battle Axe lasted for a while. Another story by itself ! )