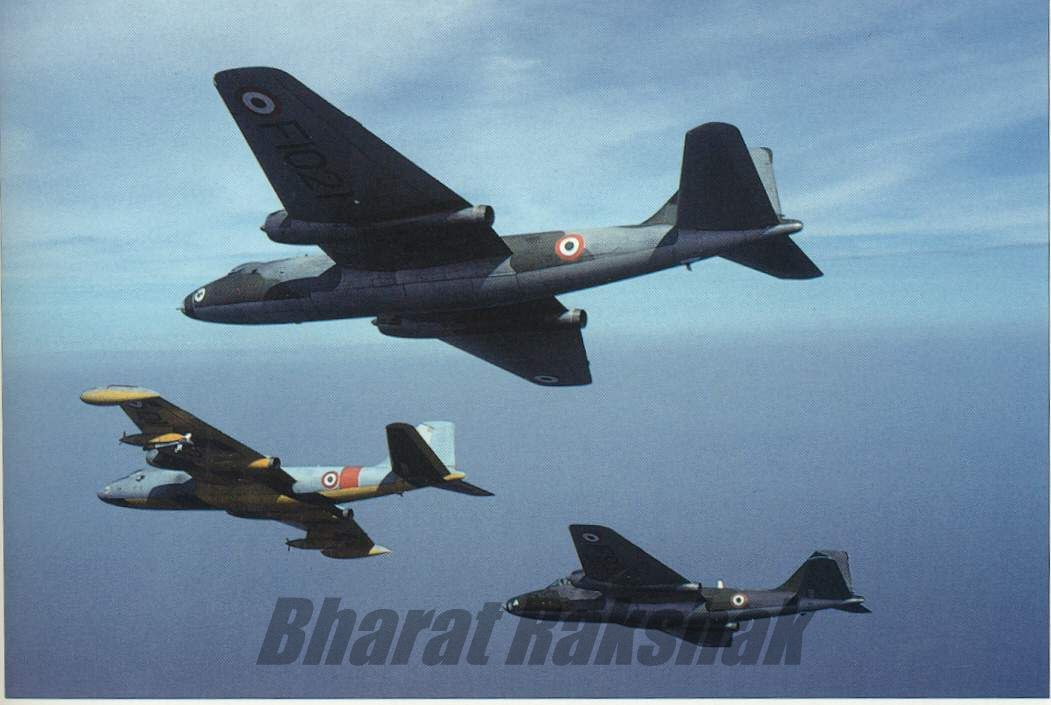 Five Unit colours, over 1,00,000 hrs of flying, operations beginning with Goa, two Indo Pak wars culminating in the Kargil conflict, first combat squadron to take part in overseas operations in the Congo, only dedicated Reconnaissance squadron, recipients of over 6 MVC's & 26 Vr C's –The Canberra Bomber Association Pune India marked its Grand Reunion at a nostalgic and celebrated function at The Poona Club on 6 Dec 2014.The Marshal of the Indian Air Force Arjan Singh, recipient of the Distinguished Flying Cross, was the Chief Guest.

The Marshal, the only living officer of the Indian Armed Forces currently holding a five-star rank, is 96 years old and still maintains a ramrod straight posture.Till recently he reviewed parades in full uniform, and stood as required throughout the ceremonies, even when a chair was offered in deference to his age.The entire serving and retired top service brass of this old garrison town was present to honour a man who had been an icon of the IAF for decades.

The 6th of Dec dawned bright and clear, one of those salubrious mild winter days, typical of good ole Poona. We numbered over 500 , it members ,aircrew & ground crew, came from all quarters of the globe. Alcohol & large dollops of nostalgia were followed by a trip down memory lane. Nicknames necessarily dominated the discourse ,especially ones that sounded like expletives. After all we belonged to a privileged elite. Mostly, we hadn't seen one another for more than 30 to 40 yrs.Yet, as we gathered together , we were able to pick up the game, just as we had left it , decades before: no reticence; no hesitation; no shyness. Within moments the noise level in the hall had said it all. Veterans, escorted by wives, children & even grand children, mingled with officers from the other streams & sister services, along with civil dignitaries. They greeted each other, reminisced of operations and friendship of over 50 years, with an unparalleled flying machine ,with four different roles and an operational area that spanned the airspace of the entire country & beyond.It was an emotional moment and the nostalgia overwhelming. It was almost as if nothing had changed after so many years.Only our hair was grey and our paunches bulged. We parted ways, not too sure when- and if -we would ever meet again, in thunder, lightening or in rain.

Two well groomed, young and charming hostesses welcomed all the guests. The dress code was meticulously followed, the gentleman formally attired & the ladies most exquisitely dressed. . The main backdrop announced the purpose of the august gathering. 'Canberra Bomber Association Pune India -- Bomber Night-- 6 Dec 2014'. Above, was a painting, 'Tuskers raid Peshawar' depicting the raid & bombing of Peshawar air base by the Canberra aircraft of 5 Sqn, in all its glory. The painting, by the well known artist, Gp Capt Deb Gohain.

It was an electrifying moment when the veterans had the first glimpse of the Marshall alight from his service car adorned with his flag & a five-star plate. He was escorted by his staff-officer & personal physician and received at the porch by the President of the Association, Wg Cdr Sharad 'Shorty' Thakar & the Secretary Wg Cdr Dilip 'Sambi' Sambhare. Though noticeably weak, he plouged his way through the guests, personally greeting ladies, children & senior veterans. He was so overwhelmed with the welcome that midway to his seating, he requested for the mike to express his feelings.

The The MC jump started the evening with her witty humour that geared the audience for the evening ahead. The organisers pulled out all the stops to ensure that the event was well handled.This was the Canberra Bomber Asso's grand show. Watching the Chief Guest setting the ball rolling brought out the best in our performance. It was a magnificent affair. The spectacle was worthy of the event...The lit forecourt of the Poona Club, the sparkling decorative LED illuminations, the well dressed gathering , the sound of background music, the impressive backdrop,the exquisitely decorated hall., the ceremonial bearers, orderly guests, the playful evening dusk & the brief & crisp ceremony of the rendering of the Air Force song and respect for the departed . The majesty of the setting and the majesty of the occasion matched perfectly. It was a sight fit for the Gods. For all our fault lines of our organizing, we were happy that all went smoothly & well.

The Marshal stood for approx 15 minutes to address audience. He particularly exhorted the veterans that in their old age they should have a circle of good friends on whom they could rely on for support. After his speech the band played,'He's a jolly good fellow', followed by the popping of the champagne, a standing ovation & finally three cheers.

What was most note worthy, was the presence of several children of veterans, who had lost both parents & were essentially taking a trip down memory lane. Veterans arrived from Australia, UK, USA & Canada not to mention from all corners of the country. Gp Capt & Mrs Jaggi Rehil set the dance floor on fire. The dance band 'Groove Junktion' played numbers - old & new- from time to time in between happenings The event was sponsored by the UB Group for Kingfisher beer & the UB Spirits for hard liquor & cocktails. Venkys provided sumptuous snacks.The three bars were overflowing, the dance floor was packed and everyone let their hair down in enjoying themselves. 25 dinner for two invites presented by the 5* hotels of the metro were given away as spot prizes. Later in the evening, the senior most officer, Gp Capt Amrik Singh Ahluwalia, who had undergone the first Canberra Conversion Course in the United Kingdom, released the Bomber Memoirs & brochure . A Canberra key chain was generously distributed among the guests. Two legendary icons of the fraternity, Wg Cdr Jaggi Nath MVC & Bar & Air Mshl Dushyant Singh, PVSM AVSM VM VSM ex A-O-C in C Eastern Command, were both present & took part in all the fun, games. & frolic.

The function culminated after dinner to the tune of Auld lang Syne...... and everyone held hands, singing....Should old acquaintance be forgot, And never brought to mind.....The consensus by one & all was that, it was memorable & enjoyable, warm & personal, and everyone apparently had a good time. There was a clamor to have such events more frequently in the future.

It was a nostalgic reunion and very heartening to see how our buddies are keeping the old flag flying. Just before we broke up, I asked a much retired squadron leader what his secret of looking relatively young & fit was. He took me aside & pointed to a pleasant middle aged lady. "Conrad" he said with a twinkle in his eye, "I've been a widower for many years now but I need to be looked after. This is my latest companion" Fortunately my LOH was at the far end of the hall & did not hear the rest of the conversation !

This occasional reunion gives us a chance to meet people we forgot ,who were once part of our lives. Some famous, some who had notoriety thrust on them. Flitting in and out actually, it did not matter what became of all of us. We were all together in some way or the other, we were all of the Canberra fraternity. "Meet you at the next reunion" an off repeated phrase as one says good bye to comrade in arms or colleagues. With the normal wear and tear of life,many do not make it to the next reunion, but still that sense of belongingness continues. What are old acquaintances for ? To recall a past that will never return.

The Canberra Association, an association made up of IAF personnel, who served in units that operated the English Electric Canberra Bomber aircraft, hosted the event.The Asso is based in Pune, which has long associations with this type. The city's Air Force Station Lohegaon earlier Yervada, saw the first Canberra landing in India, on its induction into the IAF in 1957. Subsequently there were 3 Sqns at this base 6, 16 & 35.The fleet was decommissioned in 2007. It saw service for exactly 50 years.Canberra sqns took part in the 65 & 71 conflict from this very base.The Canberra Asso has members worldwide and is an active body looking after the interests & welfare of its veterans & widows.