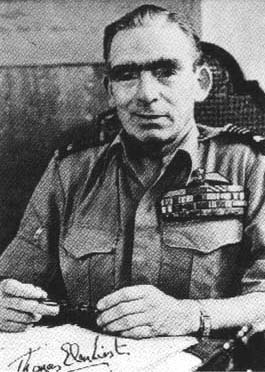 Elmhirst was born in 1895, the fourth son of a Priest. Completing his education from the Royal Naval College, he enrolled into the Royal Navy and took part in World War I. He was involved in many a sea battle and having survived them, he was among the select few of a batch of twenty sailors who formed a Naval Airship Service raised to counter German Submarines. Elmhirst commanded a Naval Air ship between 1915 to 1918, after which he took over command of a the 8th Airship Squadron.

In 1919, Elmhirst transferred to the Royal Air Force. He flew seaplanes in the beginning, slowly transferring to flying boats, and bombers. He commanded XV RAF Squadron flying the Hawker Hart. during this time, he qualified at Staff college and also took a first class Air Navigator's license. Elmhirst served a brief spell with the British embassy in Turkey as Air Attache.

During World War II, Elmhirst commanded a Bomber Wing, and as an Air Commodore, was on the staff of Fighter Command during the Battle of Britain in September 1940. In 1941, he moved over to Egypt commanding a Group there. When the Desert Air Force was formed, Elmhirst was the Senior Administrative Officer with it, and he took part in the Battle of El Alamien, which turned the tide in North Africa. Soon, He took over as the Senior administrative officer of the First Tactical Air Force that participated in the invasion of Tunisia and subsequently Sicily. After D-Day, Elmhirst took over the Second-in-Command position of the 2nd Tactical Air Force under Air Marshal Tedder. After the end of the fighting in Europe, Elmhirst was posted as Director Air Intelligence at the Air Ministry. In 1947, Elmhirst was posted to India as the Chief of Inter Service Administration on the staff of the commander in chief in India.

It was during his tenure as the Chief of ISA that Lord Mountbatten and Prime Minister Jawaharlal Nehru requested Elmhirst to take over as the Chief of the Royal Indian Air Force. Elmhirst accepted the offer, but put two preconditions. The first was that the RIAF would be independent of Army control and the second was to choose the services of half a dozen or so RAF Officers to help him in the initial days of the task.

Prime Minister Nehru accepted both the conditions and Thomas Elmhirst became the first Chief of the Independent India's Air Force. At that time, the IAF was an air force only in name. It consisted of half a dozen squadrons and some training institutions, with no establishment or administrative infrastructure worth its name. No Commands or Group HQs existed. it was left to the organising skill of Elmhirst to piece together a command and control structure. Ably assisted by a team of handpicked British Officers and Senior Indian Officers like Air Commodore S. Mukherjee and Gp. Capt. A.M. Engineer, the IAF soon took shape. Even though fighting in Kashmir had broken out, the task of establishing the Air force did not get delayed. Elmhirst raised an Operations Group (later Western Air Command) and a Training Group. In addition to this Elmhirst carried out many sweeping reforms that laid the foundation for the administrative set-up of the Indian Air Force of Today.

Elmhirst laid down office in February 1950, after commanding the air force for nearly three years. He had written an autobiography and led a quite and uneventful life till his death on 6th November 1982.