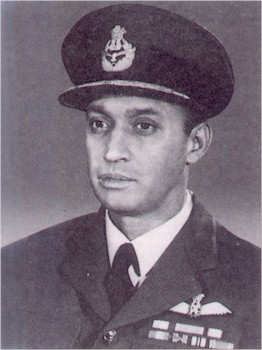 August 1940, Daur Valley, NWFP. An Army Post was under intense attack by the Frontier tribesmen. The post had almost exhausted its ammunition in repulsing the numerous attacks. The Army soldiers knew that if they were not reinforced soon, the post would be overrun, with disastrous consequences for the defenders. When another attack came, two Hawker Harts appeared on the scene. The Harts strafed and repulsed the tribesmen. By now the defenders had exhausted their ammunition. The tribesmen were like vultures to the prey, they knew the Harts could not stay in the air forever defending the post. Sooner or later they will fly back to base and the post will be overrun. The defenders and the pilots knew it too. Then the pilot in the lead aircraft had an ingenious idea. He instructed his air gunner to remove his socks...and stuff them with the ammunition from the Lewis machine gun mounted in the rear cockpit of the Hart. The Hart swooped down low over the besieged post and the bullets-stuffed socks were dropped down at the post. The soldiers grateful at the sudden turn of the events managed to use the ammunition to beat back yet another attack. Allowing enough time for another aircraft to reach the picket and drop another 800 rounds to the soldiers below. The pilots and the aircraft saved the day.

The Harts were from No.1 Indian Air Force Squadron, and the pilot was none other than the commander of the squadron, Squadron Leader Subroto Mukherjee, the first Indian ever to command a flight and a squadron. Mukherjee's ingenuity saved the day for the soldiers on the ground. No wonder this young pilot rose in the annals of the air force and became the first Indian Chief of Air Staff of the free India's Air Force.

Mukherjee was one of the six recruits selected for training at RAF Cranwell, when the decision to give commissions in the RAF to Indians was taken. After training at Cranwell, Mukherjee and four other officers were inducted as pilots when the first Indian Air Force Squadron was formed on 01 April 1933. Mukherjee served with the squadron as a Pilot Officer for sometime. In July 1938, he was put in command of 'B' Flight of the No.1 IAF Squadron in the rank of Flying Officer. Mukherjee became the first Indian Officer to command a squadron when he took over No.1 on 16 March 1939. After converting to the Hawker Hart, the squadron now moved to Miranshah in the NWFP. It was here that Mukherjee led the squadron into action against the tribals of the NWFP.

When the war broke out in the east, Mukherjee was in the Air HQ as a Wing Commander. He served in various staff assignments during the war and for his services, during World War 2, Mukhejee was given the Order of the British Empire (OBE) in 1944. At the time of Independence, Mukherjee was the senior most Air Commodore serving with the IAF. The only other Air Commodores being Air Commodore Mehar Singh and Air Commodore Narendra.

On 15 August 1947, when India achieved Independence, the armed forces too became independent forces. They were no longer under the British Army or the King. However, as there was a lack of senior officers, it was decided to put serving British Officers as Commanders. Accordingly Air Marshal Sir Thomas Elmhirst became the Air Force Chief. Air Commodore Mukherjee was promoted to Air Vice Marshal and posted as the Deputy Chief of Air Staff at Air HQ. Mukherjee served as the Vice Chief for over 6½ years. Working under three different British Chiefs helped him groom himself for the top post.

On 01 April 1954, Mukherjee took over from Air Marshal Gerald Gibbs as the Chief of Air Staff of the Indian Air Force. At that time he was just about 43 years old. Upon him fell the task of reequipping and restructuring the Air Force with newer aircraft & equipment. Under his tenure, the Air Force inducted a variety of state-of-the-art aircraft. The Dassault Mystere, the Hawker Hunter, the BAe Canberra and even the Folland Gnat was inducted during his tenure.

Mukherjee took care to see that even the personnel and human resources planning and development received much attention. His task was commendable for he had to deal with the post independence non-violence driven defence policy. And to make his task tough, he had to deal with the then Defence Minister, V.K. Krishna Menon, who was well known for his stubbornness and intolerance towards the service chiefs. Mukherjee had a non-controversial and dignified role as Chief.

In November 1960, Air India International airlines made its first inaugural flight to the city of Tokyo, Japan. Mukherjee accompanied with other IAF Officers were on this flight. The officers stayed back at Tokyo for some days. On 08 November 1960, Mukherjee accompanied by one of his friends from the IN went for dinner at a Tokyo Restaurant. While having dinner, Mukherjee choked on the food which blocked his air passage. In minutes he was dead. A tragic & needlessly unnecessary death that took away one of the pioneers of Indian Aviation in the prime of his life. Mukherjee was hardly forty nine years old when he died.

He was cremated with full military honours and the air force flew a fly past of forty-nine aircraft. One each for each year of his life. Mukherjee's death was much mourned in the Indian Air Force. He was genuinely loved and respected by all ranks.Subroto Mukherjee had a very special place reserved in the hearts of every air force man at that time.