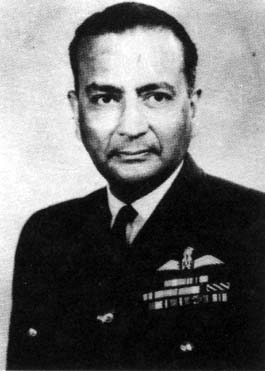 It was under the able leadership of Air Chief Marshal Pratap Chandra Lal, that the Indian Air Force won its most decisive victory in 1971. Paradoxically, unlike the earlier Chiefs, Lal was no fighter jock. He was an instructor and a manager, par excellence. His contribution to India's aviation industry via tenures with the Indian Airlines Corporation and Hindustan Aeronautics Ltd. bear testament to his professional abilities. He was just the sort of chap who could, and did, mould a large and rapidly expanding air force into an efficient fighting force.

Pratap Chandra Lal was born in December 1917, into a family of Allahabad-based lawyers. He had an early interest in aviation, and became the youngest Indian to earn his Amateur Pilot's license at age 17, in January 1934. Having qualified for a diploma in journalism at King's College, London in 1938, Lal expected to return to full-time study of law at the Inns of Court in the fall of 1939.

However, the outbreak of war in Europe precluded his return to England. As part of Britain's efforts to strengthen India's defence in such perilous times, the government decided to expand the Indian Air Force (then one squadron of Wapitis). Consequently, everyone in India with a pilot's license was invited to join up. With little else to do in the fall of 1939, Lal decided to give the air force a try.

P.C. Lal arrived at the training establishment at RAF Station, Risalpur on 12 November 1939. An acute shortage of navigators in India (both RAF and IAF) led to Lal being recruited as a navigator, with the proviso that he would later be trained as a pilot. He was commissioned into the Indian Air Force in Karachi during May 1940. Three months later he was posted back to Risalpur as a navigation instructor. During his tenure there he instructed both RAF and IAF pilots (both of whom he considered rather weak in navigation). In January 1941 he was posted to No.3 Coast Defence Fight based at Calcutta. Two months later he was recalled as Navigation Instructor to No.1 Flying Training School at Ambala.

It was during his tenure at Ambala, that Lal earned his 'wings' flying Audaxes and Hawker Harts. Early in 1943 Lal was posted as flying and navigational instructor to the Operational Training Unit at Peshawar where he oversaw the conversion of two RAF Squadrons and the IAF's No.7 and No.8 Squadrons to Vultee Vengeance dive bombers. In October of 1943, after much persuasion, Lal was allowed to join Hem Chaudhuri's No.7 Squadron as a combat pilot. The squadron, however, didn't see action until February of 1944, by which time it had converted to Hawker Hurricanes. Between February 1944 and March 1945 No.7 Squadron (along with No.1 IAF) was very active on the Burma front and took part in every major battle: including, Imphal, Kohima, Akyab and Rangoon. In that one year Lal had managed to log 210 hours and ended the campaign as a Squadron Leader. In October 1945, P.C. Lal earned a Distinguished Flying Cross for undertaking hazardous recon flights deep into Japanese held territory.

In 1946, Sqn. Ldr. Lal applied for and received a permanent commission in the IAF. He was thereafter promoted to Wing Commander and sent to Calcutta to take charge of the Inter-Services Recruiting Office in August 1946. This stint lasted a mere five months, and in December that year left to attend a senior commander's course in the U.K. Upon his return in was promoted to Group Captain and appointed in 1947 to the post of Director of Planning & Training. In 1948 he relinquished training responsibilities to Group Captain (later Marshal of the Air Force) Arjan Singh. In May 1949, Lal was was sent to attend courses at the RAF Staff College for nearly a year. He returned to India in June 1950 and was shortly promoted to Air Commodore.

In November 1951, P.C. Lal led the Indian Air Force team that helped bring King Tribhuvan of Nepal to safety in the face of abortive palace coup. Between 1953 and 1955 P.C. Lal worked as the Military Secretary to the Cabinet. In October 1954, P.C. Lal went to Europe at the head to a team to evaluate new aircraft for the IAF. He became the first Indian to fly supersonic (in a Mystere IVA) and to fly the Gnat. This team was also instrumental in ensuring that the IAF didn't end up buying the Supermarine Swift. In 1957, P.C. Lal was deputed to the Ministry of Civil Aviation as General Manager of the Indian Airlines Corporation (IAC). During his six years there he oversaw its successful evolution as a corporate entity. It was during this period that he fell out with then Defence Minister V.K. Krishna Menon over the purchase of replacements for the Airlines' aging Dakotas. Menon was convinced that IAC's requirements could be met with the Hs.748s that the Air Force was acquiring. Lal thought otherwise. In the end Krishna Menon prevailed. And at the end of P.C. Lal's tenure as GM of IAC on 30 September 1962, Krishna Menon ensured that his services with the Indian Air Force were terminated.

By a quirk of fate Krishna Menon's inept handling of the China crisis in October 1962 forced his resignation before the year was out. In December 1962, P.C. Lal's services were reinstated by the Air Force as Air Officer Maintenance with the rank of Air Vice Marshal. On 24 November 1963, he was posted as Air Officer Commanding-in-Chief Western Air Command. And on 01 October 1964, he moved to Air Headquarters as the Vice Chief of Air Staff. He served in that capacity during the war in 1965. For his contributions during the war P.C. Lal was awarded the Padma Bhushan. At the end of the war he was appointed to head Training Command with the rank of Air Marshal. This was to be a short stint, and in late 1966, he was deputed to head Hindustan Aeronautical Ltd. as Managing Director. During his three years at HAL, P.C. Lal was instrumental in overseeing the establishment of the production lines for HAL's new MiG-21 and Gnat fighters, and the Hs.748 freighters (the very aircraft he had crossed swords with Krishna Menon over!). What was more ironic is that P.C. Lal, who had almost been thrown of the Air Force, was asked to take over as Chief of Staff effective, 16 July 1969.

Upon taking office, Lal was determined to ensure that the Indian Air Force contribute more decisively to the outcome of any future war. And to this end spent much time reorganizing training and logistics. Early on during his tenure, P.C. Lal made it a point to visit various army units in order to better understand their needs for air support. His efforts did not go un-rewarded. In the winter of 1971, P.C. Lal found himself leading the air force in a war against Pakistan. Indeed, who better to lead the IAF in these crucial years than a distinguished pilot, a skilled instructor and a manager par excellence. Improved tactics, training and careful planning all contributed the the ascendancy of the IAF as one of Asia's most effective air arms. The air force was involved at every stage of this intense conflict which led to the creation of an independent Bangladesh on 16 December 1971. For Lal, the war in 1971 marked the pinnacle of his career. It would not be an overstatement to say that P.C. Lal was the architect of the IAF's most decisive victory.

In 1972, P.C. Lal was awarded the Padma Vibhushan for his leadership of the air force. He retired from the IAF, on 15 January 1973 as the IAF's most successful chief and its most highly decorated officer. After his retirement from the Air Force P.C. Lal continued to serve in various advisory capacities to the Government of India. Air Chief Marshal Pratap Chandra Lal passed away in 1984 while he was still working on his memoirs and a history of the IAF. The book was eventually completed by his wife and provides an eminently readable history of the IAF's first 25 years.