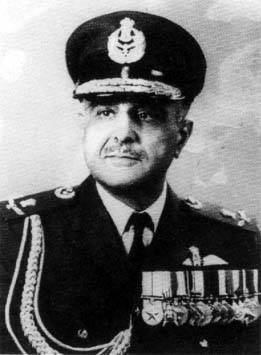 Air Chief Marshal OP Mehra was born on 19th January 1919 at Lahore. His basic education was at the Sacred Heart Convent. He finished school at the Central Model School in 1933 and joined the Government College Lahore and completed a Masters Degree from the Punjab University in mid 1940.

After a short spell of flying at the Northern India Flying Club Lahore, he was selected for the Indian Air Force and joined the services as Pilot Officer on 30th November 1940.

No.3 Squadron was initially equipped with Hawker Hart and Andax Aircraft and saw extensive service in the North West Frontier Province. With just over two years service in January 1943 he was selected to undergo a course at the Defence Service Staff College at Quetta. He was the youngest and the junior most Officer on that Course. On successful completion of the course he was reposted to No.3 Squadron, which by then had been equipped with Hawker Hurricanes. Towards the end of 1944 after doing a course at SLAIS (Specialised Low Attack Instructors School) - the Squadron moved to the Arakan Coast.

Though he was the adjutant of the Squadron, his operational flying was as much if not more than the other Officers of his seniority. The Squadron operated for a few days from Coxs Bazar on the Arakan Coast and was then moved to Bawali Bazar and later to Akyab. The task of the Squadron was offensive operations against the Japanese army, which by then had started retreating.

Around mid March 1945 the Squadron was pulled out and deployed at St. Thomas Mount Airfield near Madras. After a short period the Squadron was repositioned at RAF Station Risalpur in the North West province to be re-equipped with spitfire Vs and VIIIs. At about this time he was promoted to the Rank of Squadron Leader and he assumed Command of the Squadron, which on completion of the re-equipment and armament training was shifted to Bangalore and within 3 days of its stay, the Squadron was re-deployed at Kolar, an air-field which had not been in use for years. The Squadron had a trying time at that base as it was called upon to manage every aspect of running a base with even the basics not in position.

In March 1946 Mehra was selected to serve as the Indian Air force representative at the Joint Chiefs of Staff in Australia - An organization set up to provide Administrative and Logistics support to the British Commonwealth Occupation Forces located in Japan. In view of Nationalization of the armed forces, he was recalled and posted in February 1947 as the Chief Ground Instructor at the No.1 Advance Flying School Ambala, to replace the RAF Officer who was returning home.

Having had a long spell heading Training Institutions, he was posted as Senior Air Staff Officer (SASO), Operational Command,(later designated as Western Air Command). After a span of nearly four years he was shifted to Jamnagar as Commanding Officer of Armament Training Wing effective April 1958. On promotion to the rank of Air Commodore in January 1960, he returned to Air Headquarters as Principal Staff Officer in charge of the Policy and Plan Division, which he held only for 10 months as his services were loaned to the Defence Research and Development Organisation as Dean of the Institution of Armament Technology.

On promotion to the rank of Air Vice-Marshal in August 1963 he look over as AOC in Chief Maintenance Command, in which capacity he served during the 1965 War. His next assignment was at Air Headquarters as Air Officer Maintenance (AOM). In January 1968 he was awarded the PVSM and promoted Air Marshal in March 1968. Soon thereafter he was posted as Deputy Chief of Air Staff, Air Headquarters. Early 1971 he was deputed as Chairman Hindustan Aeronautics Ltd Bangalore. On 15th January 1973 he returned to Air Headquarters, designated as the new Chief of Air Staff, suceeding Air Chief Marshal PC Lal.

Air Chief Marshal Mehra relinquished the post to Air Chief Marshal Moolgavkar on 31st January 1976, on completion of his tenure. During his over 35 years in the Air force he flew a very wide variety of aircraft - from the early days flying the Tiger Moth and finally the Jaguar (in UK) and the MiG-21. He also flew most of the Helicopters and Transport aircraft from time to time. In his flying career, He had amassed over 6000 flying hours.

Retirement did not mean an end to his eventful career. He represented India at a UNESCO meeting in Paris as Deputy Leader of India's Team. He was the recipient of Padma Vibhushan in January 1977 - a recognition of his 35 years services covering a wide range of responsibilities within and outside the Air Force. He went on to serve as the Governor of Maharashtra (1980) and later on Rajasthan (1982). Air Chief Marshal Mehra was actively involved in the Olympic movement right from 1954. In 1975 he was elected as President of the Indian Olympic Association and was responsible for the hosting by India of the Asian Games in 1982. From 1978 to 1980 he was President of the Asian Games Federation, currently known as the Olympic Council of Asia and continues to be the Honorary Life President of the Olympic Council of Asia.

Since retirement and after completion of his constitutional assignments he is actively engaged in Community service projects. For such work he has received the Srimoni Award in 1988, the Rajiv Ratna Award in 1991 and the HELP-Age Indian Golden Award in 1999.