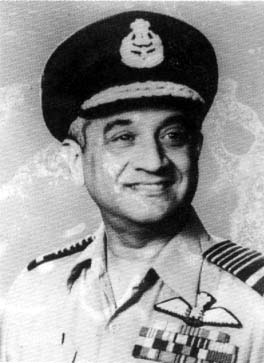 Idris Latif joined the Royal Indian Air Force in 1941 at the age of 18 and was commissioned in 1942. On completion of his training at Ambala, he was posted to the No.2 Coastal Defence Flight in Karachi, where he flew vintage biplane aircrafts like the Wapiti, Audaxes and Harts, on Anti-Submarine flights over the Arabian Sea.

During 1943-44, he was one of the few Indian pilots to be seconded to the Royal Air Force in the United Kingdom. There he underwent training on more contemporary aircraft like the Hurricane and Spitfire, with the Operational squadrons of the RAF. He returned to India in 1944 and took part in the Burma campaign, flying the Hawker Hurricane for No.3 Squadron. This involved flying interdiction sorties against ground targets.

After the campaign, Latif was posted to Madras, but soon he joined No.9 Squadron in Burma, again flying the Hawker Hurricane. Under the command of Sqn. Ldr. Asghar Khan, he was good friends with both his CO and another flamboyant pilot, Flt. Lt. Noor Khan. Both the pilots went on to become Chiefs of Air Staff of the Pakistan Air Force.

When Partition bought with it the division of the armed forces, Latif as a Muslim officer was faced with the choice of joining both India or Pakistan, but there was no making up of minds for him. He was very clear that his future lay with India. Even though both Asghar as well as Noor Khan called him up to persuade Latif to join them in the fledgling Pakistan Air Force, Latif made it clear that for him, religion and country were not interlinked. It was no surprise that Latif made his way to become the first Muslim Chief of Air Staff of the Indian Air Force.

After the war, Latif on, promotion to the Squadron Leader, became the Commanding Officer of No.4 Oorials, flying the Hawker Tempest. He led the first fly past over New Delhi, after India turned a republic in 1950. Afterwards Latif had the honour of being nominated to Indonesia along with two other officers to help induct Vampire fighters into the newly-born Indonesian Air Force. After returning from this assignment, Latif attended the Defence Services Staff College at Wellington.

Latif returned from the USA in 1965, just as war clouds were brewing in the Indian subcontinent. Latif was posted to Eastern Air Command as the Air Defence Controller and later was the Senior Air Staff Officer. Soon after in 1966, Latif took over as Station Commander Lohegaon Airbase at Pune. Lohegaon had the unique distinction of having, fighters, bombers, four-engined transport aircraft and WW2 Liberator aircraft, all of which Latif flew from time to time. After Air Chief Marshal P.C. Lal became CAS, Latif moved to Air HQ in the newly created post of Assistant Chief of Air Staff (Plans) in the rank of Air Vice Marshal, and in this capacity he carried out the onerous tasks of making first line assessment of frontline combat squadrons and the modernisation plans of the air force. For his role, Latif received the PVSM in 1971.

During the 1971 War, Latif was still the ACAS (Plans). He was keenly involved in flying to the frontline squadrons and getting first hand information on the progress of the war and the requirements of the units if any. Latif was in the Eastern Sector at Shillong when the surrender in East Pakistan took place. In 1974, Latif became an Air Marshal and held the appointment of Air Officer In-Charge of Administration at Air HQ. He became AOC-in-C Central Air Command afterwards. One of the memorable landmarks of this tenure was the Air Force relief operations under his stewardship during the Patna floods in 1975. Under his guidance, the helicopter pilots flew as many as 20 sorties per day to carry out humanitarian tasks. After a short while, he took over Maintenance Command. Latif then joined Air HQ as the Vice Chief of Air Staff, which post he held till 1978, when he took over as Chief of Air Staff of the Indian Air Force.

As the first Muslim Chief of Air Staff of the IAF, Latif was involved fully in the re-equipment and modernisation plans of the air force. He convinced the government to approve the procurement of the Jaguar strike aircraft, a proposal which was lying dormant for over 8 years. He also held negotiations with the Russians and saw the induction of the MiG-23 and later, the MiG-25 aircraft into the IAF. Flying has always been a passion to Latif, and throughout his tenure, he never lost an opportunity to fly. In fact right up to the end of his career in the Air Force, Air Chief Marshal Latif was interested in flying and more flying. One of the last acts before retirement was to fly in the trisonic MiG-25, which was then just assembled from a semi-knocked down condition by the Air Force personnel.

Latif retired in 1981, after which he held the gubernatorial posts of Governor of Maharastra and Indian Ambassador to France. On completion of the tenure, he left France in 1988 and has settled back in his home place in Hyderabad.