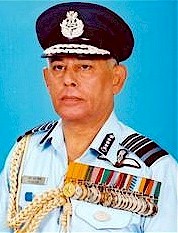 Air Chief Marshal Fali Homi Major was born on 29 May 1947 in Secunderabad. He studied at Wesley High School, Secunderabad and was commissioned in the Indian Air Force on 31 Dec 1967.

The Air Chief Marshal has flown over 7000 hours on the Sentinel, T-6G, Mi-4, Mi-8 and Mi-17 helicopters. As a Wing Commander, he commanded the IAF’s first Mi-17 Squadron, which operated at the Siachen Glacier – the World’s highest battlefield. As a Group Captain, he commanded another Mi-17 Squadron, leading it into battle during the operations of the Indian Peace Keeping Force in Sri Lanka. For his leadership and courage during this tenure, he was awarded the Vayu Sena Medal (Gallantry). Later, as Station Commander of Air Force Station Sarsawa, he led the daring rescue of eleven passengers from a stranded cable car in the middle of a valley at a resort in Himachal Pradesh. For this act of gallantry, he was awarded the ‘Shaurya Chakra’.

He has held a number of other important staff and field appointments – Joint Director (Helicopter Operations) and Director Operations (Transport & Helicopter). In 1999, he took over as the Air Officer Commanding Leh (Ladakh), in the aftermath of the Kargil conflict. For his leadership, successful accomplishment of tasks and distinguished service of a very high order, he was awarded the ‘Ati Vishist Seva Medal’ in Jan 2002. He was promoted to the rank of Air Vice Marshal in Feb 2002 and appointed as Assistant Chief of the Air Staff (Personnel Airmen & Civilians) at Air Headquarters. On promotion to the rank of Air Marshal in Jan 04 he moved to HQ Integrated Defence Staff as the Deputy Chief of Integrated Defence Staff (Operations) and directed the relief, rescue and rehabilitation operations of the Indian Armed Forces, in India and abroad, in the aftermath of the Tsunami. On 05 Sep 05, he was appointed as the Air Officer Commanding-in-Chief, Eastern Air Command. That tenure saw the successful conduct of three major international air exercises with the United States Air Force, Royal Singapore Air Force and the French Air Force. He was awarded the ‘Param Vishisht Seva Medal’ by the President of India on 26 Jan 2006. He took over as the Chief of the Air Staff on 31 Mar 07.

He is a graduate of the National Defence College and Army War College. He is married to Zareen and they have two children. His son is a pilot with Jet Airways. His daughter is married and a homemaker. The Air Chief Marshal is an avid golfer and a cricket fan.