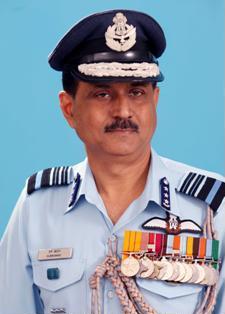 Air Chief Marshal NAK Browne PVSM AVSM VM ADC was commissioned into the fighter stream of the IAF in June 1972. He has flown various jet aircraft including Hunters, all variants of MiG-21s, Jaguar and Su-30K. He is a Fighter Combat Leader who has also served as an instructor at the Tactics and Combat Development Establishment (TACDE).

Air Chief Marshal Browne has rich experience of operational flying, training and staff assignments. He has trained with the RAF in UK on Jaguar aircraft in 1979 and has commanded a Jaguar Squadron during 1990-92. He is a graduate of the Air Command and Staff College, USA (1987-88) and has also served as Directing Staff at the Defence Services Staff College, Wellington during 1989-90.

He served as Staff Officer to Chief of the Air Staff during 1993-95 and as Joint Director at Air War Strategy Cell at Air Headquarters in 1995-96. The Air Chief was responsible for establishing the Indian Defence Wing in Tel-Aviv, Israel in April 1997 where he served as the Defence Attaché till July 2000. Subsequently, he served as the Chief Operations Officer of the first Su-30 Base at Pune and went on to command the same Base during 2000-03. It was during this period that the multi-role Su-30 MKI fighter aircraft was inducted into the IAF. He served as the Air-I at HQ Western Air Command in 2003-04 and from October 04 - March 07 he was the ACAS (Intelligence) at Air Headquarters. On 05 March 07 the Air Officer was promoted to the rank of Air Marshal and appointed as Deputy Chief of the Air Staff responsible for IAFs major modernization programmes. On 01 Jun 09, he assumed the command of Western Air Command as the Air Officer Commanding-in-Chief. He took over as Vice Chief of the Air Staff on 01 Jan 11. On 31 Jul 11, he was promoted to the rank of Air Chief Marshal and assumed the Command of Indian Air Force as Chief of the Air Staff. The Air Chief has been awarded the Param Vishist Seva Medal (PVSM), Ati Vishist Seva Medal (AVSM), Vayu Sena Medal (VM) and Honorary Air ADC by the President of India.

Air Chief Marshal Browne is an alumnus of the National Defence Academy. His wife, Mrs Kiran Browne is a home maker. They have two children; son Omar, 27 years old, is a software engineer from PICT Pune and currently serves as a fighter pilot in a SU-30 MKI Sqn and daughter Alisha, 25 years old, is an MBA graduate and works in a multinational company.