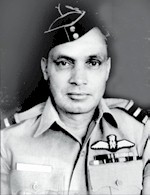 A veteran of three wars - WW2, 1947-48 Kashmir War and the 1965 India-Pakistan War, Air Vice Marshal John Jasper Bouche (Pop) passed away today in Perth,Australia,after a brief illness.The cause of death is a cardiac arrest,but he was only recently diagnosed with cancer, also.He was 91 years. He leaves behind his wife Rita and two children,Richard and Suzanne.

John Jasper (Pop) Bouche joined IAF soon after Anglo-Indians were allowed to enroll during WW II. Due to lack of resources in India, Pop Bouche was sent to Canada for flying training.

Along with others, Pop faced considerable racism with Canadian instructors alleging that Indian natives just could not learn to fly. As far as I recall, Pop and many other Indians were inducted in IAF as Sergeant Pilots. He was commissioned on 27 June 1943. He trained as a fighter pilot and soon qualified as a Pilot Attack Instructor.

Pop Bouche became the first IAF pilot for many milestones. One of these important to mention is that Flying Officer JJ Bouche was the first to land a fighter aircraft (a Tempest?) to land on the 1000 yard grass strip of Srinagar after Raja Hari Singh signed the Accession document. I read his description of the event in Air Marshal Bharat Kumar's remarkable boo tyiytle, "An Incredible War, IAF in Kashmir War 1947-1948.

Pop Bouche was in the first batch, if not the first pilot to convert to Spitfires. Later (in 1957?) he led the Indian team to convert to Hunters in th UK. I am not sure, but I believe he was the first Commanding Officer of the first Toofani squadron.

As Chief Instructor at ATW Jamnagar, his contribution to operational training of entire squadrons at a time was invaluable. His achieved was highly appreciated in the Service. John Bouche along with Scorpy Ghosh was the first pilot to qualify as a Tech (Eng) at AFTC Jalahalli. Soon after completing he was needed to command Aircraft & Armament Testing Unit. Its CO Suranjan Das was suddenly moved to HAL to replace Wg Cdr Roshan Suri who had crashed the first HF-24 during its maiden take off.Wg Cdr John Bouche became the first and only non-test pilot ever to command A&ATU, a post he held from June 1961 fffor three years. He then handed over the unit to Scorpy Ghosh.

After commanding a unit and a station, he became Air 1 EAC. Despite being a Staff Officer, he personally managed the Mizo Hill operations. He was awarded the AVSM for his services to IAF.

As an Air Commodore, John Bouche commanded AF Kanpur which by then was the exclusive domain of engineers. Next, he was then posted to Air Hq (RK Puram) as IAF's first Director (Maintenance & Planning). Many laudable procedures and practices were established during this tenure.

AVM Bouche's last appointment was at Air Hq as ACAS (Ops). Although I had retired by then, I heard that apparently he was passed over for promotion to Air Marshal. The rumours, which I wonder if they were ever true, alleged that he was asked to relocate our weapons stores to a place south of their location. The land vacated in this way was wanted for Sanjay Gandhi's venture to make cars and aircraft. Being true to his duty, Pop flatly refused to agree as it would have delayed any operational action in the north and west if needed urgently. This was alleged to be the reason why he was not promoted. In disgust he is said to have resigned and soon emigrated to Western Australia.

As you can guess, AVM Bouche was one of my much admired heroes, well-worth emulating. May his soul rest in eternal peace.